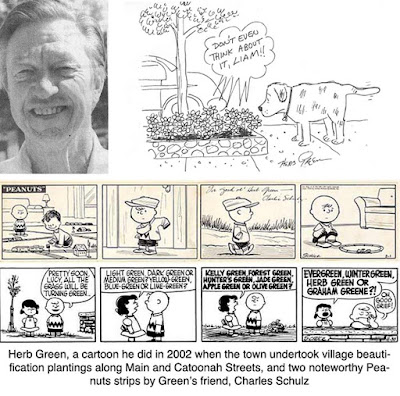 Herb Green:
A Good Ol’ Cartoonist
During his long career, Herb Green worked for some of the nation’s top magazines and socialized with many of America’s leading cartoonists.
Herbert L. Green was born in 1927 in Olathe, Kans., and graduated from the University of Missouri. He drew cartoons for many national magazines, especially The Saturday Evening Post and Playboy, and was a former president of the American Cartoon Society.
Mort Walker, whose comics include “Hi and Lois” and “Beetle Bailey,” recalled in his book, “Backstage at the Strips,” when Charles Schulz first came to New York City in 1951. The young “Peanuts” creator stayed at Herb Green’s apartment, sleeping on the living room couch.
Green and Schulz became good friends.  In 1954, when Schulz decided to make a major change in the character of Charlie Brown — turning him from mischievous and smart-alecky  into the lonely and downtrodden kid he’s now well known as — he did so with the Feb. 1, 1954 strip. And he gave the original of that strip to Herb Green, together with the dedication, “For good ol’ Herb Green — Charles Schulz.” Herb Green’s widow, Crystal, donated it to the Charles M. Schulz Museum in Santa Rosa, Calif.
Two years later, Schulz snuck Green’s name in a strip — very unusual for “Peanuts.”
The Greens moved to Ridgefield in 1983. For many years, villagers often would see Mr. Green walking his dog along the sidewalks of Main and Catoonah Streets. He always greeted passersby with a smile.
He died at his home in 2012 at the age of 85.