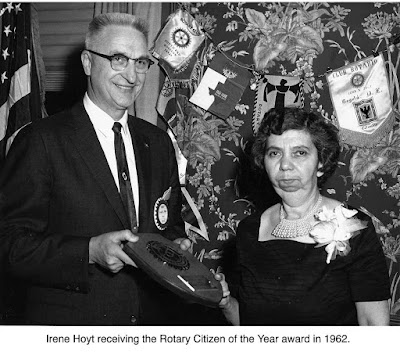 Irene Hoyt:
Our Florence Nightingale on Wheels
Irene Smith Hoyt was a nurse – for most of her career, THE nurse – at the District Nursing Association, where she worked from 1927 until her death in 1972. But she was more than a nurse. “When Irene Hoyt came into a sick room,” Linette Burton wrote in a Ridgefield Press editorial, “the patient’s spirits rose as she crossed the threshold.”
The Wilton native grew up in Ridgefield.  and graduated from the high school in 1925. After two years of nursing school, Hoyt joined the DNA, now the Ridgefield Visiting Nurse Association.
During her 45-year career, she ministered to literally thousands of Ridgefielders. She was called Ridgefield’s “Florence Nightingale on Wheels,” and for decades her name was synonymous with the District Nursing Association — and a helping hand.
For most of her career, she was the only employee of the District Nursing Association, working out of a one-room office on Catoonah Street. As an example of what that meant, in 1956,
● She handled 933 cases. Those cases entailed 4,823 visits.
● At the same time, she provided health checks, including weighing and measuring, for 1,182 school children.
● She did 1,139 vision and hearing tests for students.
● She assisted the school physician with 596 physical exams of students.
● She performed 990 individual health inspections “for emergency care and dressings to prevent spread of contagious diseases”
During that time, the DNA was governed by seven volunteer officers including a first vice president and a second vice president, and 19 volunteer members of a board of directors. All, to see that Irene Hoyt and her patients got the support they needed.
Today there are more than 100 paid staff members of the Ridgefield Visiting Nurse Association, the modern version of the DNA. Instead of a one-room office on Catoonah Street, the RVNA has a multimillion dollar headquarters which just opened on Governor Street.
In 1964, when Philanthropist Jack B. Ward gave Hoyt a brand-new Studebaker Commander, 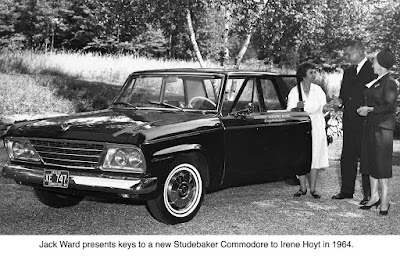 he observed that she “was all by herself and she had a tiny little dilapidated car – it was almost like in the old-fashioned days when a nurse got on a horse and went up into the mountains.That little lady worked so hard that I decided to buy her a proper car.”

The building Hoyt worked in “looked so run down inside” that Ward  once paid to have the association headquarters completely renovated.
Her devotion to the welfare of Ridgefielders led to her being named Rotary Citizen of the Year in 1962.
(An accidental fall from her high chair as an infant resulted in a broken chin so damaged that doctors were unable to properly repair it. It left her with a chin that was very recessed and she appeared to have no chin at all.)
It was in her office, doing the work she loved so much, that Miss Hoyt died suddenly one Sunday in 1972 at the age of 63.
“She devoted her talents to helping people who were in trouble – physical, mental or emotional – and her success can be gauged by the number of people who will miss her gentle ministrations,” Linette Burton wrote.