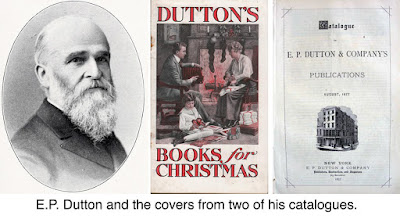 E. P. Dutton:
A Devout Publisher
E. P. Dutton has left the world with countless books and Ridgefield with one of its finest mansions. The founder of the publishing company that bore his name for more than a century also contributed considerably to bringing the Ridgefield school system into the 20th century.
Born in New Hampshire in 1831, Edward Payson Dutton grew up in Boston, graduated from Boston Latin high school, and was supposed to enter Harvard when, dreading having to study more Greek, he convinced his father to bring him into his dry goods business.
He worked there a couple years when a friend who had a book store introduced him to bookselling.
When only 21, he and the friend formed Ide and Dutton, booksellers. They did well and decided to move into publishing as well as selling; their first book was Horace Mann’s lectures on education, which became a big seller. In 1858, Dutton bought out the business, which became E.P. Dutton & Company, and which in 1869 he moved to New York.
In 1923, shortly after his death at the age of 92, Dutton was called by The New York Times “the dean of a daring group of leaders of the book industry” who had made New York City the literary capital of America. He “was a link between a half-forgotten day when Boston held up her queenly head as the mistress of letters on this side of the Atlantic, and these new times when a writer’s door of fame is planted firmly in the rocky soil of Manhattan.”
When Dutton came to New York, there were only two publishing houses in the city; when he died, there were 1,200.
In addition to the longstanding E.P. Dutton imprint, he had early on bought Ticknor & Fields, a Boston publisher, and acquired American rights to the British series, Everyman’s Library, under which his company turned out scores of affordable titles.
Dutton published more than 10,000 different titles during his life. When he died, there were 4,000 active titles in his company’s catalogue.
Many of his authors were leading writers of their era, including G.K. Chesterton, Hilaire Belloc, John Dewey, and Algernon Blackwood.
He led his company for 71 years; “probably no other publishing house in the country was under the direct guidance of its founder for so long a period,” The Times reported.
In the early 1890s,  Dutton decided to build a house on High Ridge, and hired Ridgefield's top builder to do it. “Big Jim” Kennedy spent two years carefully erecting the place, which still stands at 63 High Ridge. (In the 1970s, reported historian Dick Venus, someone did a surveyor's sighting from the front door to the back door of this house and found less than a quarter inch difference, despite the huge weight of the mansion whose roof alone is nearly the size of a football field.)
Venus remembered as a young boy seeing Dutton riding his buckboard, pulled by a beautiful mahogany bay. Dutton had a wide leather belt across his lap. “I learned later that the strap was to prevent him from falling from the wagon,” Venus wrote, “for even at his advanced age, he drove at a very fast pace. Come to think of it, he must have pioneered in the use of the seat belt.”
Venus also told of races down Main Street that Dutton would participate in around the turn of the 20th Century, along with his friends, George Haven, Barton Hepburn and Dr. Edwin Van Saun. “Like his friends, Edward Dutton was an avid horseman and his horse were considered to be among the very best.”
A deeply religious Episcopalian who was a benefactor of St. Stephen’s,  Dutton would often drive his horse and buggy into the woods  where he would park, meditate, and read prayers in his breviary.
In 1912, he joined others in contributing the money to buy the East Ridge land on which the 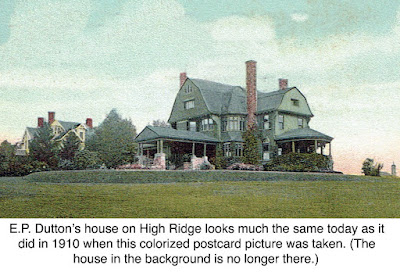 big, brick Benjamin Franklin Grammar School, later to be Ridgefield High School, was built in 1915. In her autobiography, “Memories,” Laura Curie Allee Shields tells how her first husband, Dr. William Allee, approached Dutton for a contribution, explaining the need for a modern school in Ridgefield. “Mr. Dutton was most enthusiastic and sympathetic, and he turned to Doctor and said, ‘Suppose we take it to the Lord.’ Doctor told me he knelt down by the couch and made a most beautiful prayer for direction and wisdom. Rising from his knees, he went to his desk and made out a check for $1,000 and, giving it to Doctor, told him, ‘Here, my boy, go to it!” ($1,000 then was worth nearly $25,000 in today’s dollars.)

Dutton’s firm continued on until the 1990s when it was acquired by Penguin Putnam, which still uses the Dutton imprint on about 40 books per year, half of them fiction and half non-fiction.