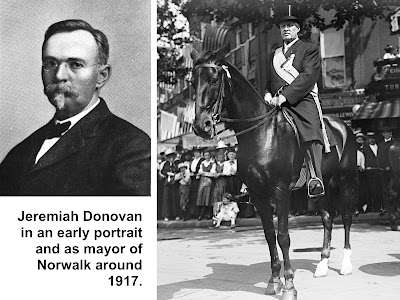 Jeremiah Donovan:
The Progressive Barkeeper
Folks who walk into Donovan and Mackenzie’s bar in South Norwalk are entering a bit of Ridgefield history. After all, the venerable watering hole was founded by a Ridgefield native who became a U.S. congressman — and a thorn in the side of Fairfield County conservatives — a century ago.
Donovan was the third Ridgefield native to serve in Congress.
The son of Irish immigrants, Jeremiah Donovan was born in Ridgefield on Oct. 18, 1857. A year earlier, his father, Jere Donovan, paid $25 for an acre of undeveloped land in Branchville, probably on the north side of the then-new highway, Branchville Road, a little west of Old Branchville Road. In 1870, when Jere Donovan sold the property to Nancy Beers, the price was $250 and it included a house.
His son, Jeremiah, attended the nearby Branchville Schoolhouse, and, some reports say,  the private academy operated by William O. Seymour in the former home of the Rev. S.G. Goodrich on High Ridge, opposite Parley Lane.
By 1870, he was living in Norwalk where his family had apparently moved, and 10 years later, was listed as a “wholesale liquor dealer” in the 1880 census.
In 1889, he established what became Norwalk’s longest-lasting tavern, long called Donovan’s and now Donovan and MacKenzie’s, located at Washington and Water Streets. “Donovan’s was a second home to local politicians during its colorful history, including a number of presidential candidates ‘taking a break’ while making their stomp through New England,” the bar’s current owners report.
Donovan continued as a barkeeper until 1898 when the politics that had been nightly discussed at his tavern began to become his profession. Already active in the Democratic party, he had been elected a member of the city council, was chosen a deputy sheriff, and served as a delegate to every Democratic National Convention from 1896 to 1916.
He was elected to the state House of Representatives in 1903 and 1904, then served in the state senate from 1905 to 1909. Finally, in 1912, he was elected a congressman, defeating Ebenezer J. Hill, who had served nine terms and had been a powerful figure in the House.
A wire service story published in newspapers across the country when he was elected  called Donovan “a progressive Democrat. His constituents say he is a real progressive. His honesty and independence have been strong assets to his political ambitions. He has always fought on the side of the people against the domination of monopoly and was a bitter opponent of the railroad lobby.  He was largely responsible for the act establishing a public service commission in Connecticut.”
He served from March 4, 1913 to March 3, 1915. But Hill had the last laugh, defeating Donovan in his bid for re-election, probably because the more conservative rural towns in the district — such as New Canaan, Wilton, Greenwich, and Darien — rallied to return him. Unfortunately for Congressman Hill, he died two years later.
After his defeat, Donovan returned to more local politics and ran for mayor of  Norwalk, winning office from 1917 to 1921. He was known not only as a progressive, but a generous man and for three of the four years was mayor, he turned over his entire salary to Norwalk Hospital.
He retired from politics in 1921 and died in 1935 at the age of 77.