Max Gunther:
A Prolific Writer
“The English language has an enormous amount of power if it’s used right,” Max Gunther told The Ridgefield Press in 1976. “In English, you can roll up your sleeves and really say what you want with impact.”
And for nearly 50 years, doing it right was Max Gunther’s work. He wrote 26 books – several of them best-sellers – and countless magazine articles.
A native of England, Gunther came to the United States as a boy, served in the Army, and graduated from Princeton in 1949. He began his career as news editor and staff writer for Business Week from 1950 to 1955, and was a contributing editor to Time. He also wrote for  Saturday Evening Post, Playboy, McCall’s, Reader’s Digest, Redbook, TV Guide, and many other magazines. In 1968, he became a contributing editor of True.
His first book, “Split Level Trap” in 1960, described suburban life and became a best-seller, as did “The Weekenders,”  a 1964 popular study of how Americans spent their weekends.
His specialty was books on wealth. — one of his most quoted observations is “It is unlikely that God’s plan for the universe includes making your rich.”
A top seller was “The Zurich Axioms: The Rules of Risk and Reward Used by Generations of 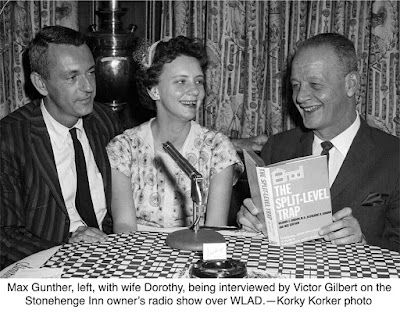 Swiss Bankers.” The 1985 book was inspired by his father, Franz, who worked for what is now UBS, which is called the second largest wealth management organization in the world.

He also wrote “The Very, Very Rich and How They Got That Way” (1973) and “Instant Millionaires: The Secrets of Overnight Success”, both published in 1973.
Most of his   other books were non-fiction, many dealing with mystical subjects, including “D. B. Cooper: What Really Happened” which appeared in 1986, and “Wall Street and Witchcraft: An Investigation into Extreme and Unusual Investment Techniques.” Many of his books are still in print today.
Gunther lived on Peaceable Ridge and later Beechwood Lane from 1960 until 1987 when he moved to Heritage Village. He died in 1998 at the age of 72.
In a 1976 Ridgefield Press interview, Gunther credited his schooling in England and New Jersey with fostering his interest in writing. In England, “even in the very early grades, they were forcing us to write essays and they gave us topics that we could get our teeth into and could express our emotions about, not just dry expository subjects.”
In his Maplewood, N.J., high school, “there was a great deal of emphasis of writing. We had a couple of student magazines and a student newspaper and, of course, the yearbook, and there was abundant opportunity for writing. In this high school, writing was presented to us as an alternate after-school activity — as a way in which one could have some fun and get one’s creative urges working. It was presented as sort of an indoor sport, not as a type of work.
“I spent more time after school sitting at a typewriter than doing sports and things like that which other kids were doing.”