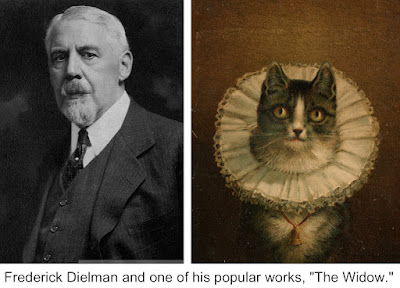 Frederick Dielman:
A Well-Rounded Artist
Frederick Dielman, a celebrated artist of his era, was especially known for his murals, both painted and mosaic. The mosaic panels in the Library of Congress, entitled Law and History, are often cited as his best-known works, but many of his paintings and illustrations were widely seen, and often reproduced.
One of two Ridgefielders to be president of the prestigious National Academy of Design — the other was architect Cass Gilbert — Dielman was born in Hanover, Germany, on Christmas Day, 1847. As a child came to Baltimore where he graduated from Calvert College in 1864. He  was a topographer with the United States Engineers from 1866 to 1872 and his work included surveying potential routes for canals through the Allegheny Mountains of Virginia.
In the 1870s, he decided to pursue art, and studied at the Royal Academy of Munich, Germany.  “He may have had a natural artistic talent as it is recorded that he published his first drawing, ‘A Confederate Raid in Maryland,’ at age 16,” said a Library of Congress biography.
He maintained a studio in New York City for many years.
Dielman was elected to the National Academy of Design in 1881, serving as president from 1899 to 1909. He was a founder of the Society of American Artists in 1877. Off and on between 1878 until 1903, he taught at the Art Students League of New York, and was director of the Art Schools of the Cooper Union in New York from 1905 to 1931. There, he taught both day and evening classes until he was 84 years old.
“It is believed that he taught more American art students than any other art professor,” the Library of Congress said.
A  former student once recalled, “When Professor Dielman lectured to us, he was already well over 60. But he had a buoyancy of spirit and a twinkle in his eye which belied his years… The lectures were absorbingly interesting and sank deeply into our consciousness.”
In 1883, Dielman married Lilla Marion Benham, daughter of Major General Henry Washington Benham, an 1837 graduate of West Point.  (Dielman’s portrait of his father-in-law is in 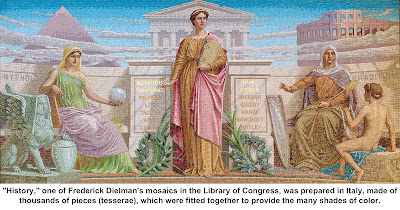 the West Point Museum.) The Dielmans had three children, one of whom became a painter and sculptor, Ernest Benham Dielman (1893-1972), who lived here as a boy.

The couple moved around 1900 to a home off Rockwell Road called “The Boulders,” a name inspired by the rocky terrain.  (When he developed the property in the 1950s, Jerry Tuccio recalled the estate name in the road names, Boulder Hill Lane and Road.  Local legend says that the British engaged in a small skirmish with the colonists atop this hill during the Battle of Ridgefield in April 1777.)
When Dielman died in 1935 at age 87 at Boulder Hill, he was the oldest member of the National Academy of Design. He is buried in New Windsor, Md., northwest of Baltimore, where he grew up as a boy.
In 1933, when Dielman was 85, he was asked what he considered “the best recipe for a happy, well-rounded life,” the Library of Congress reported. “The artist said: ‘I think if a man tries to ascertain what is his probable function in life and then carries it out honestly, sincerely and with as little pretense as possible, he is pretty sure to come out right.’”