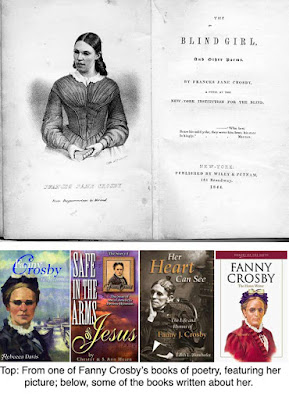 Fanny Crosby:
A Pioneering Woman of Song
Fanny Crosby was among the leading hymn-writers of all time, a blind woman who spent her formative years in Ridgefield. She wrote thousands of hymns, including “Blessed Assurance,” “Safe in the Arms of Jesus,” “Praise Him! Praise Him!,” and “Close to Thee.”
But while her production of religious music brought her fame, she was accomplished — even a pioneer — in others fields as well.
Born in 1820 in nearby Brewster, N.Y., Frances Jane “Fanny” Crosby was blinded at six weeks by a disease. A few months later, her father died, leaving his 21-year-old wife a widow.
Fanny and her mother came to Ridgefield when she was nine, living with Mr. and Mrs. Elijah Hawley on Main Street on the south corner of Branchville Road in a house that’s no longer there.
“Mrs. Hawley, a kind Christian lady…who had no children of her own, became deeply interested in me, and under her supervision I acquired a thorough knowledge of the Bible,” Crosby wrote in one of her two autobiographies: “She gave me a number of chapters each week to learn, sometimes as many as five…and at the end of the first 12 months, I could repeat a large portion of the first four books of the Old Testament and the four Gospels.
“The good Mrs. Hawley was kind in every respect and sought to teach me many practical lessons that I now remember with gratitude and affection.”
When  Crosby was about 15, she left Ridgefield to attend the New York Institute for the Blind. Soon after graduation from the Institute in 1843, at the age of 23, she worked as a lobbyist in Washington, D.C., pleading for support of education for the blind. There she became the first woman to speak in the United States Senate.
She later appeared before the joint houses of Congress, offering along with her oration this brief poem:
Ye, who here from every state convene,
Illustrious band! may we not hope the scene
You now behold will prove to every mind
Instruction hath a ray to cheer the blind.
Crosby soon joined the teaching staff of the New York Institute for the Blind. At this time she was beginning her writing career, producing non-religious poetry, and there she struck up a close friendship with a fellow teacher who was just 17 years old. His name was Grover Cleveland. The two spent time together after classes. and the teenaged future U.S. president often wrote down poems that Fanny dictated to him.
She wound up publishing four books of secular poetry.
Crosby’s poetry-writing soon led to song-writing, though most were at first secular or, as she called them, “people’s songs” — probably what we’d today call folk songs. She wrote political songs, patriotic songs (especially during the Civil War), and even cantatas. During the war, she began writing religious songs, both under her own name and pseudonyms, and over her career she penned the lyrics to more than 8,000 hymns.
Crosby once said she wanted her hymns to win a million souls for Christ, and her words were certainly available to many more than a million:  Books containing her songs are said to have sold at least 100 million copies.
Many of Crosby’s hymns were published by Biglow and Main of New York City, one of the first publishers of sacred music. The “Biglow” was Lucius Horatio Biglow who, in 1889, bought an 18th century house on Main Street to create a fine retreat from the city. (When his daughter, Elizabeth Biglow Ballard, died in 1964, she bequeathed that estate to the town. Today, it is Ballard Park.)
Biglow probably came to Ridgefield because of his partner. The “Main” of Biglow and Main was Sylvester Main, born in Ridgefield in 1817 and a childhood friend of Fanny Crosby. “Among the playmates who used to gather on the village green was Sylvester Main who was two or three years older than I,” Crosby recalled.
“He was a prime favorite with the gentler sex, for he used to protect us from the annoyances of more mischievous boys.”
Sylvester Main became a singing-school teacher and wound up in New York City, compiling books of hymn music. He went to work for William Bradbury, music publisher and hymnist, and when Bradbury died around 1868, he and Lucius Biglow partnered to take over the firm, calling it Biglow and Main.
Sylvester’s son, Hubert Platt Main, was also born in Ridgefield, and composed more than 1,000 works, including the music for hundreds of popular hymns of the mid-19th century, among them “We Shall Meet Beyond the River,”  “Blessed Homeland,” and “The Bright Forever” — the words of the last two were written by Fanny Crosby.
In the 1915 book, “Fanny Crosby’s Story of Ninety-Four Years,” she called him “one of my most precious friends.” The book includes a picture of the two, seated together, called “Fast Friends”
Fanny Crosby died in 1915 at the age of 94 and is buried in Bridgeport. She had been married for a while, but eventually separated. The couple had one child, who died as a baby.


Hubert Main, who died in 1925, is buried in New Jersey beneath a stone that says, “We shall meet beyond the river.” —based on “Hidden History of Ridgefield”