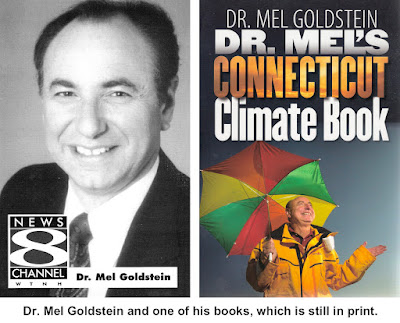 Mel Goldstein:
Connecticut’s Weatherman
Dr. Mel Goldstein loved Connecticut’s weather: hurricanes, blizzards, floods, tornadoes, ice storms, the hot and humid, the frigid and dry.
“We, in our unique and special corner of the earth, manage to have it all,” the veteran meteorologist once wrote — with excitement.
Born in 1945, Goldstein grew up in the Massachusetts fishing village of Swampscott. “Where I lived, the conversation was always about the weather,” he told The Ridgefield Press in 1987. “If a storm was coming, I’d be up all night, looking out the window. It was fun.”
Those stormy roots led him to a 1967 Penn State degree in meteorology and a doctorate from NYU.
In 1972, he and his family moved to Rowland Lane, and Dr. Mel, as his students called him, taught meteorology at Western Connecticut State University, ran its well-known weather station, did research, and supplied forecasts and other weather-related information to 20 radio and TV stations as well as many corporations and even the governor of the state. Locally, he was heard over WLAD in Danbury many times almost every day for many years.
By the 1990s, he was the full-time weatherman at WTNH, TV Channel 8, in New Haven and was writing a weather column for The Hartford Courant, the state's largest newspaper.
In November 1996, Dr. Goldstein was found to have cancer in his back, a multiple myeloma that was supposed to kill him in less than three years and that was already crippling him.
He and his wife Arlene moved to the New Haven area and he underwent the latest treatments at Yale-New Haven Hospital.
“I received a flood, an avalanche of calls and mail,” he said. “Masses were held for me — even in Rome. I was able to see a part of human nature that so often is obscured during our routine tribulations … That, along with the exceptional medical care, provided healing for my body.” Within three years, he was back at WTNH, teaching, and writing. His “Complete Idiot's Guide to Weather,”   published in 1999, was a top-selling book and in 2009, he wrote “Dr. Mel’s Connecticut Climate Book,” which is still in print.
“Dr. Mel is one of our great natural resources,” wrote Lary Bloom, a noted columnist on Connecticut and its people.  “Others just talk of the weather. Joyously, he makes it a matter of life and literature.”
Goldstein finally succumbed to multiple myeloma in 2012. He was 66 years old.
“Dr. Mel was more than a meteorologist — with his charming character, warm smile and friendly personality, he became an icon in Connecticut and was loved by many,” Gov. Dannel Malloy said after Goldstein died. “He dedicated his working life to ensuring that the residents of Connecticut were prepared for whatever tumultuous weather system may approach, and for that we are forever thankful.”