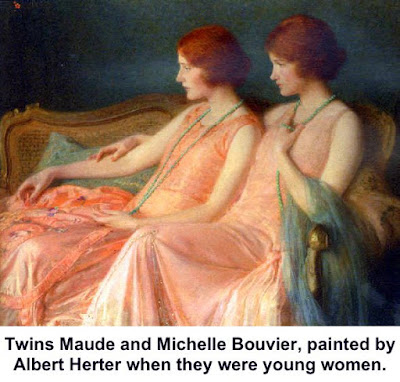 Maude Davis:
Flappers, Bouviers and Kennedys
In Maude Davis, Ridgefield had a link to some of the more colorful and interesting characters of the 20th Century — from the “flappers” of the 20s to the Kennedys and Bouviers of the 50s and 60s. An aunt of Jackie Bouvier Kennedy, she was the mother of an author who documented the lives of both Bouvier and Kennedy families.
Maude Bouvier was born in New York City in 1905, a daughter of John and Maude Sergeant Bouvier — her brother was Jacqueline Bouvier Kennedy Onassis’s father.  She came of age in the “Roaring 20s” and in an interview with a Long Island history project, reminisced about her youthful life at Lasata, the family estate in East Hampton, and in New York City. When she and her twin sister, Michelle, were 18, their photos appeared often in the society sections of New York newspapers. “Oh, my,” she said in that 1993 interview, “those debutante parties at the Ritz Carlton! We were doing all the usual things. We went to boarding school at Miss Porter’s. We went to coming-out parties at Sherry’s. We did all the things debutantes did.”
It was the era of the flappers and Prohibition, but she was not drawn into its perils. Whiskey 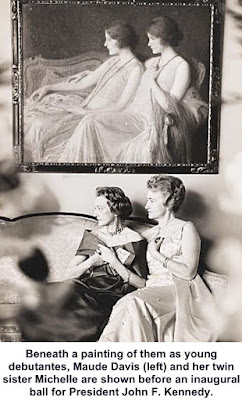 and other drinks were readily available at parties, she said, “but my twin sister and I were probably the most stupid innocents in East Hampton. We never drank or smoked. I don’t know why …”

She added that, “We were from an old family in New York. We didn’t worry about keeping up with the Joneses — we were the Joneses. But we had a wonderful time, just dancing and singing at parties.”
On a stormy Labor Day in 1928, she married stockbroker John E. Davis in Lasata’s large living room. The scene is described in “The Bouviers,” one of many books written by her son, John H. Davis. “Maude remembers that just as she said, ‘I do,’ the sun streamed through the great French windows,” he wrote.  Then, the wedding party went onto the terrace where a jazz band played the Charleston. Bridesmaids and ushers bobbed to the beat, he wrote, while sister Michelle, the matron of honor, led the dancing like a high-stepping Rockette.
After her marriage, her interests turned to civic and charitable work in New York City, often involving hospitals. During World War II, Davis served as a “gray lady,” helping wounded soldiers returning from Europe. She was also a longtime volunteer at Memorial Sloan Kettering  Hospital.
From 1928 until 1998, she spent most of her summers and autumns in Ridgefield, a town she deeply loved. After renting various houses, she and her husband eventually bought 17 East Ridge, a large Victorian next to today’s East Ridge Middle School.
Among the summertime visitors to the Davis home was her young niece, Jacqueline Bouvier, and the Davises were often a part of Bouvier and Kennedy gatherings. Maude Davis attended the wedding, inauguration and funeral of John F. Kennedy.
She remained in the East Ridge house until the death of her husband in 1966 when she bought 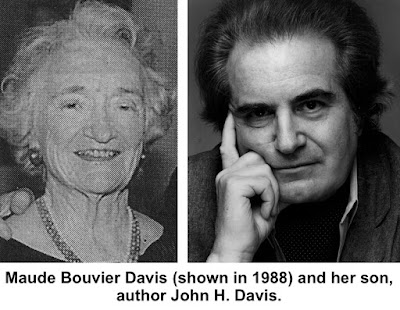 a much smaller place on New Street that had previously belonged to Metropolitan Opera star Geraldine Farrar (Farrar had called the place “Butterfly,” after Madama Butterfly, the opera in which she had starred with Enrico Caruso).

She was an expert golfer and, with her husband, was among the founders of Silver Spring Country Club.
Over the years she was also active in the Ridgefield Garden Club, serving a term as its president. For many years she fought to keep the town beautiful. For instance, in 1973, when she discovered that a road widening project on Peaceable Ridge had resulted in the cutting of many dogwoods, she wrote The Ridgefield Press, decrying the work and calling for more care in highway planning. “In the spring when the dogwood was in bloom, right here in Ridgefield we had our own Greenfield Hill,” she wrote, referring to the location of the famous Dogwood Festival in Fairfield. “The dogwood has to rank high on everybody's list [but] one more lovely dogwood-lined road has bitten the chain-saw dust.”
As Davis grew older she sold Butterfly and would stay instead at The Elms Inn on Main Street until she became too frail to do even that.
In 1999, “shortly before she died, she expressed a fervent wish to see Ridgefield again,” said her son John. Arrangements were made to have her stay in an inn and to celebrate her 94th birthday at the Silver Spring Country Club. But by the time of her birthday, she had become too weak to make the trip from New York City.
“She died peacefully in her New York apartment after her desire to go to Ridgefield one more last time was thwarted,” John Davis said.