Jeo Casagrande:
The POW and His Mom
Jeo Casagrande’s life was one of extraordinary adventure, service and accomplishment. Starting out aiming to be an aircraft mechanic, Casagrande wound up piloting huge 10-engine nuclear-armed bombers. He also spent a year and a half as a German prisoner of war.
Jeo Joseph Casagrande was born in 1921 to Adolfo and Ulrica Marcucci Casagrande, longtime residents of Bryon Avenue.  His siblings included Pio, Rudolph, Peter, Yola and Columba Casagrande.
His given name was rather unusual; today only about  two babies in every million born are named Jeo. It led to some identity problems, especially in military reporting. His name often appears in official records as Leo Casagrande, and sometimes as Joe Casagrande. The American Air Museum in Britain uses both Leo and Joe, but never Jeo.
Casagrande attended Ridgefield schools and graduated from Ridgefield High School in 1939. That December he entered the U.S. Army; it was three months after war had begun in Europe but two years before the United States became involved.
His aim was to be an aircraft mechanic, but the Army saw different talents in the 18-year-old recruit. In the years that followed Casagrande worked his way up to become an  officer and a navigator aboard heavy bombers that flew in the European Theatre from bases in England.
On Jan. 11, 1944, he was on a bombing mission to Oschersleben in north-central Germany when his B-17 Flying Fortress was shot down by German fighters. Strangely, two days after his plane was lost, his parents received a cablegram from him, reporting he had been promoted from second to first lieutenant. About 10 days later, however, they learned he was missing in action.
There were reports Casagrande may have parachuted from the plane, giving the family hope. Then in March, a postcard arrived, dated Jan. 17, saying: “I am a prisoner of war in Germany. I am not injured in any way. Apply to your local Red Cross agent for all details. This is only a transit camp. I will write and give my return address from my next camp in a few days. Love to all, Jeo.”
On Jan. 26, he wrote another card, not received in Ridgefield until May. “Dear Mom,” he 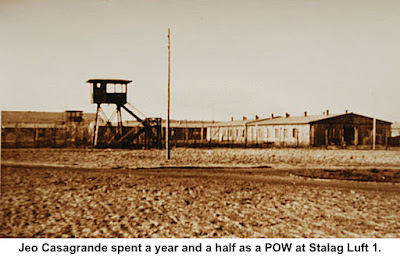 said, “Just finished a good game of cards and am about ready for bed. Sleep and food are both very plentiful. You must give the Red Cross $25 for me. They’re doing wonders over here…”

To cheer up his family, he added, “Believe me, when I get home, there won’t be a sad person around. Everyone must be cheerful and I myself will not have a grouchy day for the rest of my life.”
Casagrande spent the rest of the war as a prisoner at Stalag Luft 1 in Barth-Vogelsang, Prussia, and was liberated by the Russians in June 1945.
For many people, six years  — a quarter of the time in a German prison camp  — would have been enough military service. But Casagrande loved the Army Air Corps and elected to stay in after the war. After the U.S. Air Force became a separate entity in 1947, he became a captain in the new service.
In 1950 he was chosen to pilot of one of the first new B-36 bombers assigned to the 2nd Air Force, the reconnaissance arm of the Strategic Air Command. The B-36 was an immense aircraft — the largest piston-engined airplane ever put to use, with the longest wingspan — 230 feet — of any combat aircraft ever built (by comparison, a Boeing 747 has 196-foot wingspan). The plane’s first 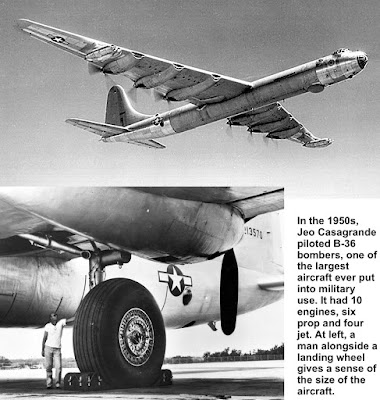 versions had six engines, a total soon increased to 10 — six prop and four jet! The B-36 required a crew of from nine to 15 people and because of it size and complexity, it was notoriously difficult to fly.

When he retired in 1962, Casagrande was a lieutenant colonel serving as an SAC squadron leader of B-47 bombers. His commendations included the Air Medal, awarded for meritorious service in aerial flight during World War II.
He became a stockbroker in Riverside, Calif., where he lived for 35 years and was active in community work. He served on the Commission on Aging and on an area social services board, and was active in the California Handicapped Association. He died in Riverside in 1996 at the age of 74. He was buried in Riverside National Cemetery with full military honors and an Air Force fly-over.
One of the first things Jeo Casagrande did when he was freed from Stalag Luft 1 was to write home, praising the Red Cross  — knowing that his mother, Ulrica, was a Red Cross volunteer in Ridgefield.
“The efforts and accomplishments of the Red Cross are a work worthy of the utmost admiration,” he told his mother. “While I was a prisoner, it was the Red Cross who kept me from looking like one of those neglected prisoners of war you no doubt have seen in the movies or magazines. Now, though the Army gives us the best of care, food and medical attention, it is the Red Cross which provides the entertainment and additional comforts which make life quite pleasant.”


Casagrande added, “I am proud to know my Mom has been patiently making bandages and other stuff for this famous organization. Yes, here is one of the Casagrande boys coming home in a few weeks and probably the biggest one factor in helping him survive this struggle has been his own mother’s outfit.”

While I appreciate the tribute to my father , and to the enormously helpful Red Cross, I must add that his assurances of plentiful food, etc., were undoubtedly to relieve his mother of concern.

As a girl I used to ask my father about his time in a Nazi prison camp, and he told me that their only food was black bread, water and rutabagas. My mother reinforced this when she described him upon his return home as so gaunt, that he was nothing like the man she had said goodbye to 2 years before.. The Red Cross, according to my father, was helpful when the POWS were released in monitoring the newly freed men's food intake so they did not kill themselves eating.