Israel Grossfeld:
The Crusading Father
Nineteen-year-old Fred Grossfeld was a quiet, scholarly student at Massachusetts Institute of Technology, where he was a sophomore majoring in mathematics. Slight in build, the Ridgefielder loved books and spent many hours in libraries.
One November night in 1965, Fred played bridge with three friends in a dormitory where his 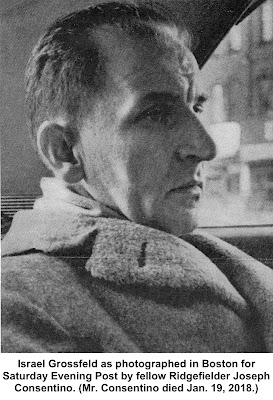 own room was located. After the game ended, he said goodnight and left. He was never seen alive again.

The tragic case of Fred Grossfeld, which made headlines locally and nationally for weeks, sparked his father, Ridgefield merchant Israel Grossfeld, to undertake a campaign that eventually helped change how law enforcement officials in the United States deal with missing persons.
Fred Grossfeld vanished on the evening of Nov. 30, 1965, but it was two days before MIT campus police learned he was missing. Campus police then spent several days either waiting for news or looking into his whereabouts before finally notifying his parents on Dec. 6, nearly a week later.
“We found the delays shocking; the university found them routine,”  Israel Grossfeld told MIT’s president eight months later. Indeed, when Israel Grossfeld had earlier approached an MIT spokesman about publicizing his missing son in the Boston newspapers, he was told, “It isn’t a story. Kids disappear every day. This isn’t news.”
“Then I’ll make it a story,” Grossfeld shot back.
In the weeks that followed, Israel Grossfeld undertook a tireless campaign to publicize the disappearance of his son who he believed had been accosted by robbers or was suffering from amnesia. He knocked on doors of police stations, politicians’ offices, and media newsrooms. Headlines began appearing across the country — The New York Times carried at least four stories.
Fred Grossfeld’s disappearance was mysterious. There was no sign of anything amiss. His room was found in perfect condition. Except for an olive-green raincoat, nothing was missing; even his watch was still sitting on his desk.
The young man was described as a “very quiet, studious boy, who spent most of his time reading and studying,” The Ridgefield Press reported Dec. 9. “He rarely left the MIT campus. He played chess and Ping Pong in addition to bridge.”
His father discounted rumors that he was having trouble in school, noting his son had a 4.8 grade point average of a possible 5. “His only weak subject was physical education,” Israel Grossfeld told The Times.
The FBI briefly investigated in December after Israel received a ransom call from someone, demanding $3,000 for Fred’s return and telling the father to wait the next day near five pay phones at the corner of Tremont and Boylston Streets in Boston. Grossfeld called authorities, and the next day, Boston police and the FBI staked out the area as Grossfeld waited at the corner. No call came. 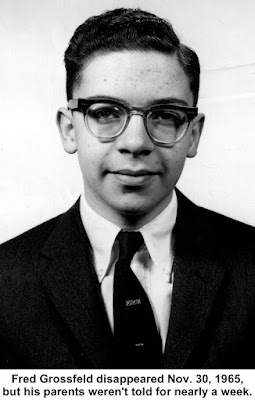 Grossfeld said at the time that he believed the caller never contacted him because news of the call and stakeout appeared in Boston media the night before. “I fear that because I did not follow the caller’s advice to not contact the authorities, they might have killed Fred,” he said.
When nothing materialized, the FBI dropped out of the case.
However, national law enforcement officials began to take more notice after Grossfeld pursued politicians like U.S. Senators Abraham Ribicoff (D-Connecticut) and Ted Kennedy (D-Massachusetts), who in turn pressured U.S. Attorney General Nicholas Katzenbach to personally review the merits of the case. In early February, Katzenbach wound up ordering the FBI to resume the search for the boy.
A native of Poland who was persecuted as a Jew by the Nazis, Israel Grossfeld had come to this country in 1949 with only $8 to his name. He eventually opened I. Grossfeld Ltd., a top-drawer men’s clothing store on Main Street.
As he worked to find his son, he virtually walked away from the business — many people in the community, including an airline pilot and the owner of a competing store — volunteered to work at Grossfeld’s shop while the father searched for his son. Scores of Ridgefielders also helped him send thousands of missing-person flyers all over the county — even to hundreds of libraries, because Fred had been such a book-lover.
“If it takes all of my life, this is my No. 1 job — to find the boy, nothing else,” he told The Times.
The search came to an end on Feb. 8, 1966. A Beacon Street woman was walking her dog along the Esplanade of the Charles River in Boston, when the pet broke loose, ran about 15 feet out onto the frozen river and began barking. Embedded in the ice was the body of Fred Grossfeld.
Boston police reported that, except for his olive-green raincoat, he was clad entirely in black clothing, including a black shirt and black tie. Investigators found no evidence of foul play.
His father was crushed. He could barely do more than nod his head when he came to the police mortuary to identify the body. He had been in Boston to meet with Cardinal Richard Cushing to enlist his aid in the search campaign. 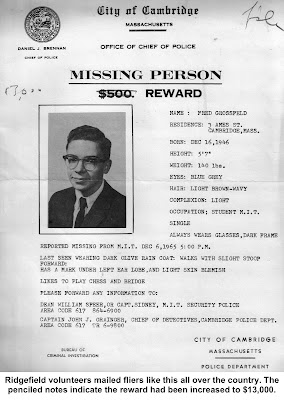 How did Fred Grossfeld wind up frozen in the Charles River? An autopsy found that the boy had drowned. There was speculation that he had committed suicide by jumping off a bridge over the Charles River, but in a letter to The Press on Feb. 15, Israel Grossfeld and his wife, Mina, wrote: “We are sure to our innermost soul that Freddie was not a suicide. He once expressed himself specifically on the subject, saying that only ‘sick’ people did such a thing. He could not inflict pain on anyone or anything, and certainly not on himself.”
Instead, the Grossfelds said, “we believe that Freddie met with foul play, whether from a gang of delinquents roaming the streets or from someone out of the vast hate world we shall probably never know.”
The week after the discovery, Israel Grossfeld told The Press, “I am not going to let the files be closed. If the police don’t care to pursue the case, I will pursue it myself. This is something that I feel I must do for the memory of my boy and for my own peace of mind.”
Grossfeld returned to the MIT campus to try to determine whether school and police officials were making any effort to solve the mystery. He was accompanied by author Max Gunther and photographer Joseph Consentino, both Ridgefielders, who had been assigned by the Saturday Evening Post magazine to cover the story.
Gunther, who had already spent three days interviewing Fred’s dormitory neighbors as well as campus officials, told The Press on Feb. 16 that he “found no evidence that Fred was unhappy or worried in the weeks before his disappearance. Furthermore, Fred’s friends recalled that the brilliant young scholar had always shunned physical violence and was extremely sensitive to pain, cold and other discomfort.
“If Fred was going to commit suicide,” Gunther said, “it seemed unlikely to his friends that he would choose such an agonizing method as jumping into an icy river and drowning.”
By the spring of 1966, Israel Grossfeld had recovered enough to focus on a new campaign: The creation of a federal agency handling missing persons.
“We need what a number of other countries already have: A federal bureau for missing persons, under the FBI,” Grossfeld wrote Senator Ribicoff in July. “In the areas of taxation, water control, education, and movement of traffic, we have gained immeasurably by the unity and coordination of federal control. Why not in personal safety?”
He had already complained to the MIT president, “It is unfortunate that disappearances of college students are each treated as a common, routine matter. In most cases they probably do present no cause for concern, but this results in tragedy for the few exceptions that do occur.”
He felt that MIT should have been more diligent in dealing with Fred’s disappearance and should have notified area police and the parents immediately. “We shall probably never know whether this entirely usual lack of communication made the difference between life and death,” he told the MIT president. 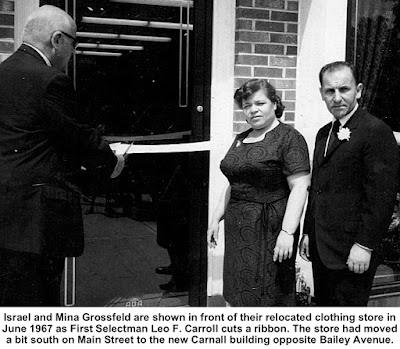 Grossfeld found a supporter in Senator Ribicoff, who had earlier been governor of the Connecticut. In 1967, Ribicoff introduced a bill to create a federal office to help local police departments to find missing persons. It would, as The Times reported, “set up a separate investigative staff within the Justice Department concerned solely with missing persons…. The staff would assist directly in investigations if requested to do so by local policemen…The office would also serve as a national clearinghouse for information on missing persons, using modern computer technology to collect and store information from all over the country.”
Such an agency would no doubt be overloaded, unless it had thousands of staff members. But the federal government did institute the National Crime Information Center, or NCIC, whose huge databases include not only criminals, but also missing and unidentified persons. Today, up to 12 million searches a day are done by law enforcement agencies, using NCIC. Many of those are for missing persons.
But as a result of the efforts of Israel Grossfeld and others, significant improvements in dealing with missing persons have been made. “Many police departments used to wait 24 to 48 hours before accepting a missing persons report,” said current Ridgefield Police Chief John Roche. “No more.”
Grossfeld had argued that any delay in searching for the missing makes the job tougher. Chief Roche agreed. In Ridgefield and in Connecticut in general, missing persons now get instant attention.
“The longer you wait, the less you have the ability to find the person,” Chief Roche said. While many missing persons cases may involve miscommunications or domestic spats, “you just don’t know,” he said.
Ridgefield police even plan for missing persons. One of the more frequent types of missing persons is an Alzheimer’s patient, who may wander off and get lost. The department maintains a database of dementia victims, with information voluntarily supplied by caregivers, so that such vital details as photos, physical descriptions, and habits can be quickly called up at headquarters.
Israel Grossfeld was active in the 1970s in supporting youth programs, particularly the Ridgefield Boys’ Club. For many years the Fred Grossfeld Memorial Fund provided scholarships for Ridgefield High School graduates.
Grossfeld sold his store and his Stonecrest Road home in 1980, the same year his wife, Mina, a teacher of Russian, died. He remarried, eventually moved to Israel, and then to Florida, where he became active in the state chapter of the Friends of Israeli Disabled Veterans.