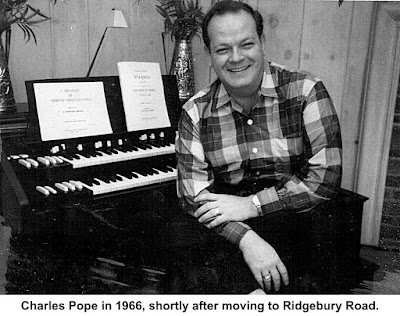 Charles Pope:
King of the Choristers
Music has long been an essential part of Ridgefield life, and among the people who kept the town in song was Charles Pope. But the founder and leader of the Charles Pope Choristers had a stage and reputation that extended far beyond Ridgefield.
Over 34 years the choristers sang more than 1,600 concerts, most of them in and around New York City, including dozens of performances at Carnegie Hall.  But that was just one of the many activities of this man who often worked seven days a week providing people with music.
Charles Frank Pope was born on June 4, 1930, in Brooklyn, N.Y., At the age of 3,   he started his musical instruction at the piano under his father, Alfred August Pope Sr. He gave his first organ recital at 15 and a year later, was hired as a church organist.
Though his father was a pianist, the young Charles Pope was discouraged from pursuing a career in music. “My family felt music wouldn’t be lucrative enough and thought I would starve,” he said in a 1966 interview. “I got a job in a bank for six months, but decided that it wasn’t for me so I went back to the organ.”
At the age of  17 he was attending Guilmant Organ School in Manhattan, and was studying choral and orchestral conducting, organ, piano, harmony, counterpoint, composition, and improvisation. In his younger days he was mentored by many leading musicians, including Robert Shaw, Elaine Brown, Fred Waring, Alice Parker, and Willard Irving Nevins.
At  Guilmant, Pope organized and began conducting the Charles Pope Choristers. Over the next 34 years this full chorus and show group presented more than 1,600 concerts and shows   — many years, he did two concerts annually at Carnegie Hall in New York City. In addition, he conducted more than 800 performances of other choruses in metropolitan New York.
Pope’s skill at leading the choristers often gained recognition in the press, including The New York Times. For instance, in 1961 after the choristers sang at the Town Hall in Manhattan, Alan Rich of The Times wrote that “the chorus has about 65 members, chosen without regard to musical training. This fact did not deter Mr. Pope from choosing an exceptionally varied, interesting and difficult program. The major work, in which the ensemble was joined by a group of brass players and a timpanist, was Purcell’s imposing Funeral Music for Queen Mary, of which few, if any, previous American performances are recorded. Energy and devotion characterized the performance, along with a remarkable degree of professional polish.”
According to his family, “he also won acclaim from the New York critics when he appeared at Carnegie Hall as a soloist with his interpretations of Bach.”
In the 1950s and 60s, Pope was also organist, choir director, minister of music, and youth director at many houses of worship in the city — ecumenical in his outlook, he performed at Lutheran, Methodist, Episcopal, Congregational and Catholic churches as well as Jewish synagogues. 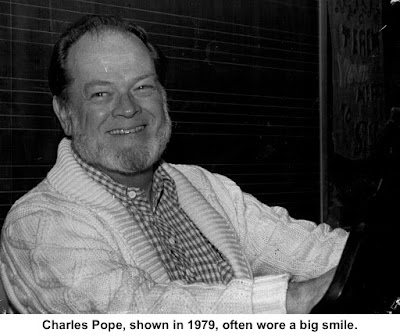 At many churches, he organized, directed, and supervised up to five vocal, two handbell and brass choirs. He also influenced and oversaw the replacement of organs at seven churches.

Pope’s Choristers appeared on both TV and radio. For the CBS television network, he conducted several hour-long, national Christmas specials and, for NBC, performed for the Kraft Music Hall and the Ernie Kovacs Show. For radio, the Charles Pope Choristers sang on  many WNYC radio broadcasts.
He presented more than 250 fully staged Gilbert and Sullivan productions, including the Mikado, H.M.S. Pinafore, Iolanthe, and the Pirates of Penzance; staged tributes to Rodgers & Hammerstein; and did dozens of Broadway shows, including The Sound of Music, Amahl and the Night Visitors, Annie Get Your Gun, Guys and Dolls, Bye, Bye Birdie, Brigadoon, 1776, and The Wizard of Oz.
Pope also served as the festival conductor for the Associated Male Choruses of America, at times leading a chorus of 2,000 men!
He was so busy he often worked seven-day weeks,  performing at the keyboard, leading  his choristers and other groups, and teaching music.
In 1965 when he moved from Brooklyn to a home on five acres in Ridgefield, he moved the choristers’ base of operations from the Brooklyn Academy of Music to Ridgefield. “My big dream for years was to have a home in Connecticut,” he said. “I looked for two years before I found this.” (To this day the sharp curve of Ridgebury Road where the Popes lived is called Pope’s Corner.)
A year later he married Eleanor Zettelmayer, whom he had met while serving as musical director for the Equitable Life Assurance Society where she was an expediter and he led the company choral group.
In 1972, he opened the Ridgefield Musical Kindergarten, aimed at teaching music to   four- and five-year-olds — who he said were “the ideal age to acquire with ease the language of music.”  By then he was also leading a bell choir and a boys choir, as well as the Charles Pope Choristers, from his house.
The Charles Pope Choristers continued to perform in Ridgefield and the region into the 1980s when the Popes decided to semi-retire and move north. He was living in Bethel when he died in 2006 at the age of 75 and had been providing organ music for churches in the area, especially Immanuel Lutheran in Danbury.
One of the churches he had served early in his career was the Dutch Reformed Church in Brooklyn, which had been established in 1654. There he started a “cherub choir,” and among its members was a young Lois Brennan. Both Brennan’s father and cousin were members of the Charles Pope Choristers, and “Uncle Charlie” became almost a part of her Brooklyn family.
“Charles and his dad were colorful characters in our family life,” Brennan recalled. “He would join us in the Berkshires for a week in August and scare the likes of us with ghost stories!”
Years later, when Brennan moved to Ridgefield, she was surprised to find Charles Pope and his choristers here. Their concerts could bring back many memories.
“I was ushering the Charles Pope Choristers Christmas Concert at East Ridge Middle School when I heard them sing the old Scottish hymn, ‘God Be in My Head,’” she said of one occasion. “Well, tears filled my eyes at the remembrance of days long ago when my dad was one of them.”
For a while in the 1990s, the Popes’ son led a new group, the Jonathan Pope Choristers. Today he is teaching music at Newtown Middle School where many of his students describe him as “amazing.”


Jonathan had an amazing teacher himself.