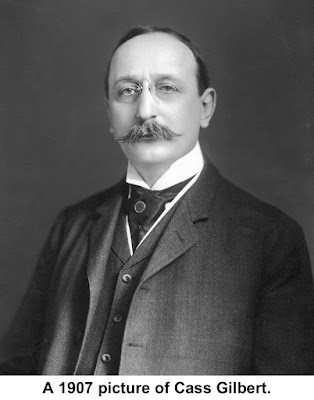 Cass Gilbert:
A Most Remarkable Architect
In New York, his Woolworth Building — once the tallest building in the world — still graces the Manhattan skyline.
In Washington, his Supreme Court building stands strong, despite battles over whom it houses.
In Ridgefield, while it has too often fallen to the failings of drivers, his fountain has greeted visitors for more than a century.
Cass Gilbert, who bought the Keeler Tavern as his country home and gave us our fountain, was one of the most acclaimed architects of the 20th Century. He designed dozens of important buildings including the U.S. Custom House in New York, the state capitols of Minnesota, Arkansas 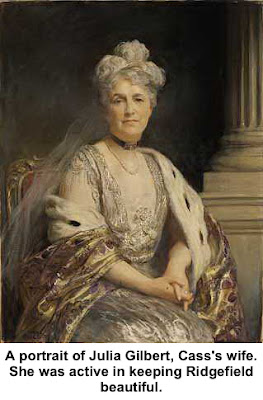 and West Virginia, the main libraries of St. Louis and Detroit, and parts of the campuses of the Universities of Texas and Minnesota.

A native of Zanesville, Ohio, Gilbert was born in 1859, and named for Lewis Cass, a U.S. senator from Michigan who served in the cabinets of Presidents Jackson and Buchanan, and was a distant relative of his surveyor father.
Gilbert quit studies at Macalester College and at the age of 17 went to work for an architect in St. Paul, Minn., then spent 1878 studying at Massachusetts Institute of Technology. After some time in Europe, he joined the prestigious New York firm of McKim, Mead, and White — White being the famous Stanford White, shot and killed by a jealous husband in 1906.
By 1882 Gilbert had set up his own architectural business in St. Paul, Minn., with James Knox Taylor, a fellow student from MIT. They turned out many local houses, churches and commercial buildings as well as the Minnesota State Capitol.
In 1880, while still in New York, he met his future wife, Julia Finch, a finishing school student. She was 18; he, 21. But it was not until 1886 when Julia was vacationing at Lake Minnetonka in Minnesota that they again met and struck up what became a serious relationship. He was living in St. Paul with his mother and she in Milwaukee with her parents, and most of their courting took place via the U.S. mail. They were married in 1887.
In 1899, Gilbert won a competition to design the U.S. Custom House in lower Manhattan — with a little help from his by-now former partner, James Taylor, who had become a federal Treasury Department design official; Taylor cast the deciding vote in Gilbert’s favor. Virtually an unknown on the national scene, Gilbert won out over many well-known firms and soon gained a wider reputation and many jobs in New York City, to which he moved in 1900.
Among his New York City projects over the years were a tall neo-Gothic building at 90 West Street (heavily damaged on 9/11); the U.S. Courthouse at Foley Square; the New York Life Building; and many train stations on the Harlem branch of what is now Metro North.
In 1913, his most famous project, the Woolworth Building, opened in Manhattan. At 790 feet, it was the tallest building in the world at the time. One contemporary observer — a minister — called it Gilbert’s “Cathedral of Commerce.” 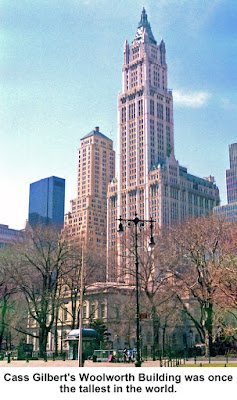 With many more words and much more poetry, Paul Goldberger, the architectural critic of The New York Times, described it in 1981 as “one of the great icons of 20th Century architecture. It has a mix of delicacy and strength that is almost Mozartian, a sense of light, graceful detail applied to a firm and self-assured structure that no later building has ever quite equalled….It was pure, graceful composition — the serene ordering of well-proportioned parts.”
Although the Woolworth Building was one of Gilbert’s most famous accomplishments, he was not the first choice to design it. Frank W. Woolworth, owner of the huge chain of “dime stores,” first approached McKim, Mead, and White, where Gilbert had earlier worked. Among the staff architects there was Harris Hunnewell Murdock of Spring Valley Road in Ridgefield. Murdock later revealed that Woolworth had called on the telephone to ask the firm about designing his new headquarters.  After Woolworth hung up, one of the firm’s partners told his secretary to give a polite brush-off to the “five-and-dime man.”
While some of his buildings were among the tallest of their time, Gilbert grew pessimistic about the future of skyscrapers, revealing in 1931 that he was uncertain that form of architecture was “here to stay,” The Ridgefield Press reported at the time. In fact, he didn’t seem happy about the tall, light-hogging buildings he’d done.
“When I see the long shadows cast even at noon on a winter’s day,” he said, “I sometimes 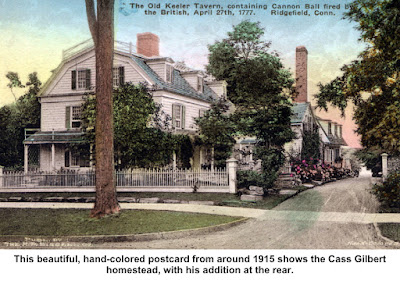 wonder if the light and air their occupants enjoy compensate for the sunlight their neighbors lose.”

Among Gilbert’s less lofty Connecticut projects were the New Haven train station, New Haven (Ives Memorial) Library and the Waterbury City Hall.
And, of course, a little fountain in Ridgefield.
Cass and Julia Gilbert came to Ridgefield in 1907, buying what had been the Ressiguie's Hotel, earlier known as the Keeler Tavern. (The Press in 1907 indicated Julia was a descendant of Timothy Keeler, the 18th Century innkeeper, but we have been unable to find evidence of that.)
The Gilberts called their home the Cannonball House because of the cannonball — actually, a defused grenade — lodged in one of the beams on the north side of the building; it was fired from a British cannon during the Battle of Ridgefield in 1777 and can be seen by visitors today.
Gilbert immediately set about enlarging the building by adding a wing to the rear that included a dining room and then-modern kitchen, with additional rooms upstairs. Around 1915, he built the formal, brick-walled gardens and Garden House, now used for many weddings and special events. But he avoided changing the lines and historic features of the old tavern building itself.
His best known work in Ridgefield, however, is the fountain that he donated to the community in 1916 at the intersection of Main Street and West Lane. When it was installed, the 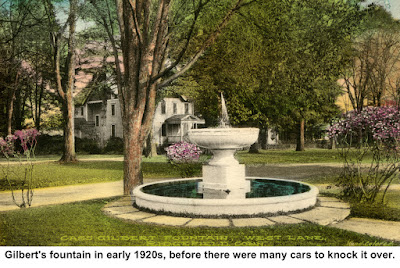 intersection looked much different from today’s heavily trafficked junction — it was a simple triangle that included a tree, and the fountain itself was much lower, with its base almost flush with the ground. The fountain was made of Italian marble — the same material used on his U.S. Supreme Court building.

The fountain was not only a welcoming symbol for people arriving from the west or south, it had a practical purpose. The lower, ground-level bowl served as a watering trough for horses that had just made long climbs to reach Ridgefield; the fountain is some 800 feet above sea level.
After being hit by many automobiles over the ensuing century, including a Hummer driven by a drunk in 2003 that shattered much of the structure, the fountain has been raised a couple feet and surrounded by planters designed to absorb the shock of a crash. A truck that hit the fountain in 2018 did hardly any damage, thanks to these precautions.
The landmark has also survived numerous attempts by the State of Connecticut to move it elsewhere so that a more traffic-friendly intersection could be created. Ridgefielders, of course, have fought each and every move-the-fountain proposal, refusing to sacrifice a landmark that sits in a prominent location at the main southern entrances to the village.
Cass Gilbert died in 1934 while on one of his frequent trips to England. There he was held in 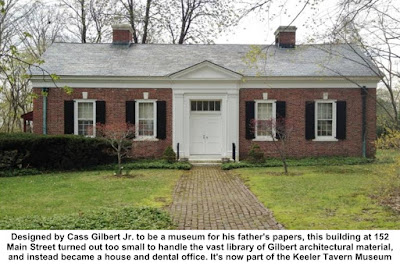 such high esteem that he had been elected to the Royal Academy of Arts, the only American since John Singer Sargent, the painter, to be so honored. (Gilbert had earlier been president of the National Academy of Design for eight years and was appointed to the Council of Fine Arts by Presidents Roosevelt, Taft and Wilson.)

The London Times wrote after he died, “The list of his most important buildings would only be long enough to prove him the most remarkable architect of his generation in America.”
Since his death, more than a dozen books have been written about Cass Gilbert and his work.
Only a year after he died, his architect son Cass Gilbert Jr. of Wilton (he designed what’s now the Ridgefield Playhouse) created a brick building at 152 Main Street as a museum to hold his father’s sketches, drawings, paintings, and papers. Located just north of the Gilberts’ Keeler Tavern home and part of the original Keeler Tavern lot, the Cass Gilbert Memorial was dedicated in October 1937 in a ceremony at which Gov. Wilbur Cross spoke.
“I am proud...to have known him, for he was one of the highest ranking architects of the country,” Governor Cross said. “He was a man who could see beauty in the tall building. You cannot prize too highly Cass Gilbert.”
However, the memorial building turned out to be too small to house the large collection of Gilbert material, which was eventually turned over to the Smithsonian Institution, Library of Congress, Minnesota Historical Society, and other archives. The memorial building was sold as a residence and eventually became the home and dental offices of Dr. Robert Mead.
Quite appropriately, Bob Mead turned into an expert at repairing Cass Gilbert’s auto- 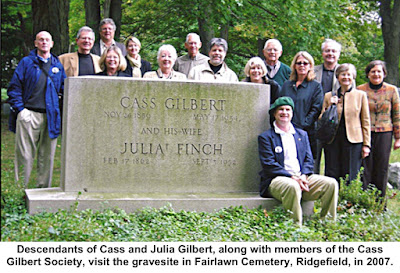 damaged fountain, and often was called upon to do so — using, also appropriately enough, dental epoxy. Dr. Mead even had copies of the fountain’s spouting turtles made so they could be replaced after periodically being stolen by vandals.

Dr. Mead died in 2015 and a year later, his family sold the homestead to the Keeler Tavern Museum, which now uses the building for its offices. Thus, two properties that were one in the 1700s and 1800s were back together again.
Cass Gilbert and many members of his family are buried in a large plot at Fairlawn Cemetery. Oddly enough, only a few dozen feet away is the grave of Ralph Thomas Walker (1889–1973),  designer of dozens of famous skyscrapers whom The New York Times called the “architect of the century.”
Thus, in a small rural cemetery on North Salem Road, containing about 625 graves,  the remains of two of the 20th Century’s greatest city architects rest in peace, each beneath relatively modest stones.