Dr. Maurice Enright:
A Better Doctor Than Writer
Ridgefield has figured into the subject or the setting of dozens of books over the last two centuries. Many are well-done, be they history or fiction, but one book stands out as just plain awful. Its author was a beloved physician.
Maurice Enright was born in Ridgefield in 1862, son of Irish immigrant farming parents who lived on Ramapoo Road opposite Casey Lane. James and Jane Enright must have been an inspiring mother and father, for many of their children became successful in the worlds of business and health. 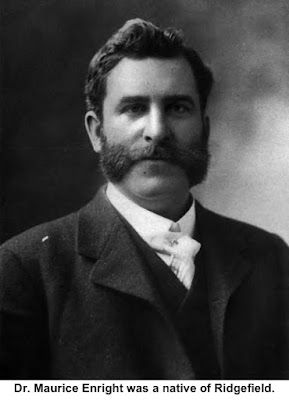 One daughter, Helen, became a leading nurse in New York City and, late in her career, became the first nurse ever employed by what’s now the Ridgefield Visiting Nurse Association.

Maurice Enright grew up in town, attending its one-room schoolhouses, and was then tutored in classical studies by Father Thaddeus P. Walsh, pastor of St. Mary’s Parish. That education was enough to gain him admission to the College of Physicians and Surgeons of New York, the first medical school in the United States and now part of Columbia University.
Dr. Enright established a practice in Brooklyn, N.Y., where he also served on the staffs of St. Catharine’s Hospital and the Little Sisters of the Poor Home for the Aged. He was a sanitary inspector for the Brooklyn Board of Health for eight years.
“Dr. Enright is progressive as a physician and as a citizen, and takes a deep interest in everything that pertains to the growth and welfare of Brooklyn, giving his support to every movement which in his judgment is calculated to advance the interests of its people,” said the “A History of Long Island” by Peter Ross, published in 1902.
On his death in 1926, The New York Times called him “a well-known Brooklyn physician and author.”
He was certainly well-known as a doctor in Brooklyn, but one might question his fame as an author.
His only known book was a novel, “The Ridgefield Tavern: A Romance of Sarah Bishop (Hermitess),” published in 1908 in both hardcover and paperback editions.
Set in the late 1700s the novel describes Sarah Bishop as the daughter of the keeper of the local inn which Enright calls the Ridgefield Tavern but illustrates it with a picture of Keeler Tavern. (History — or perhaps legend — says the real hermitess Sarah Bishop was a farmer’s daughter from 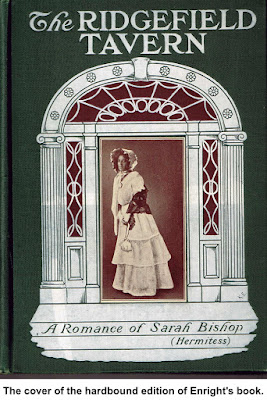 Long Island who was ravaged by a British soldier during the Revolution. She had no early connection with Ridgefield or the tavern before she began her many years of living in a small cave on West Mountain.)

In Dr. Enright’s story Sarah falls in love with an American patriot. He is wounded in battle and Sarah marries him on his deathbed — she is a widow 36 hours after she becomes a bride. After his death she retires to a cave on West Mountain for the rest of her life.
“The Ridgefield Tavern” was apparently not well-received by critics. The only review we could find devoted two sentences to it, and they were devastating: “In ‘The Ridgefield Tavern,’” wrote The New York Sun on June 27, 1908, “Dr. Maurice Enright betrays only elementary perceptions of the art of fiction. The bits of historical information included in his story are interesting; the rest of it is well nigh unreadable.”
That’s pretty rough. But then, the novel offers such lively action passages as: “When the colonel was wounded he was partly facing his men and the bullet passing obliquely through the soft parts of his back, shattered the dorsal vertebrae and either a fragment of bone or the bullet is pressing upon the spinal marrow, causing paralysis below that point.”
As for romantic writing: “That there was a mutual attraction between them could be observed by the lingering gaze of the Colonel in letting his eyes rest for a moment longer than usual in evident admiration, while a slight suffusion mounting from cheek to forehead, and a dropping of eyelids, a slight embarrassment indicating that deeper feeling which follows attraction.”
If you don’t mind Dr. Enright’s style, print-on-demand copies of his book are available on Amazon for from $10 to $50. An original hardbound is being advertised for $975!