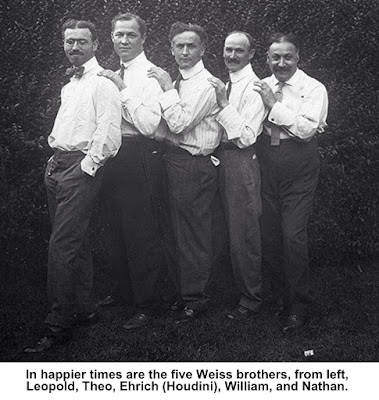 Leopold and Sady Weiss:
Why Houdini Wasn’t Happy
For decades stories have circulated about Houdini’s visits to his brother in Ridgefield. Some reports have gone so far as to maintain the world-famous magician practiced his underwater escape tricks in a pool at the grand Sunset Hall estate on Old West Mountain Road.
However, there is evidence Houdini wouldn’t have set foot in that house, which belonged not to his brother, but to his hated sister-in-law.
The brother was Dr. Leopold Weiss, a pioneer in the field of medical radiology. The sister-in-law was Leopold’s wife, Sadie — later Sady, a Manhattan fashion executive who owned Sunset Hall for six years.
Born in 1877 in Appleton, Wisc., Leopold David Weiss was the youngest of six children of Rabbi Mayer Weisz and his wife, Cecilia, natives of Budapest. One of the five Weisz brothers, Ehrich, went by the name of Harry Houdini.
Dr. Weiss, who was called Leo, became what some reports say was the first radiologist in New York City. He started his practice from Houdini’s brownstone in Harlem shortly after the turn of the 20th Century.
The Weiss family members were close and often gathered together. But in 1917, the family was in turmoil.
Sadie Glanz Weiss had divorced her husband, Nathan Weiss — brother of Leopold and brother of Houdini — and 10 days later, she married Leopold.
Houdini was heartbroken as well as furious over what he considered scandalous mistreatment of Nathan.
“The precise details of the family drama are not entirely known, but Houdini's displeasure 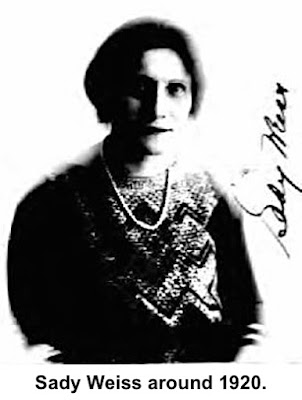 took many forms, including cutting Leo’s head out of family portraits and forbidding his burial in the Weiss family plot,” said John Cox, a longtime student of Houdini.

Accounts do not specifically mention Leo’s being disinherited, but do say that Houdini’s will specified that none of his estate should “ever directly or indirectly go to Sadie Glantz Weiss, the divorced wife of my brother Joseph Nathan Weiss, and the present wife of my brother, Dr. Leopold Nathan Weiss.”
Sadie Weiss, who by 1928 was spelling her name Sady, was a New York City fashion designer and executive. The daughter of Hungarian parents, she was born in New York and married Nathan Weiss in 1899 when she was about 22 years old.
In 1912, she and her sister, Anna Bruck, established the Bruck-Weiss Millinery, which by 1918 was “the largest exclusive millinery shop to be found on either side of the Atlantic,” according to a contemporary trade publication.  The firm owned a 10-story building just off Fifth Avenue, and occupied most of the floors, selling not only hats, but other articles of clothing for wealthy women.
“The interiors are finished in old ivory, after the period of Louis XVI, with reproductions of needlework tapestry, and festooned crystal chandeliers of the same period,” the “Illustrated Milliner” reported. “Rich Chinese rugs ornament the beautiful parquet floors, while the curtains are of extraordinarily fine Belgium laces…”
Sady, who was referred to in the press as “Madame Weiss,” believed women should have a clothing philosophy. “Until a woman has a well-established idea in her mind of just what clothes she can wear, she is unsettled, drifting,” she said in a 1928 interview published in newspapers across the country. “A clothes philosophy is almost as important in a woman’s life as a career.”
In November 1924, Sady Weiss bought the Ridgefield mansion of James Stokes, a place today called Sunset Hall. A Manhattan banker who was a pillar of the YMCA movement, Stokes had built the huge, 10-bedroom house on Old West Mountain Road in 1912 and died six years later. Sady Weiss purchased the place from a niece who had inherited it. Houdini’s brother Leopold was not mentioned in the deed or in any deeds involving the property.
Sady Weiss held on to the house until 1931, when she sold it to Ruth Cutten.
Meanwhile, the same year Sady bought Sunset Hall, Houdini wrote his will, excluding her 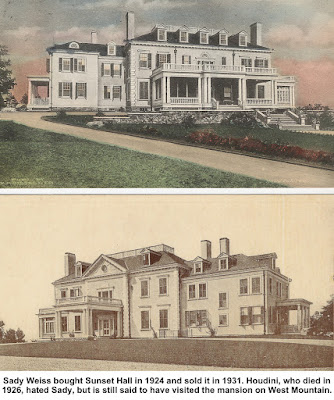 and perhaps Leopold from any inheritance.

On Oct. 31, 1926, Houdini died of peritonitis from a burst appendix.
Thus, there were less than two years when Houdini could have visited Sunset Hall — between December 1924 and his death on Halloween, 1926.
For all this period, he is known to have hated Sady Weiss and was reported to be estranged from his brother as well.
Why then would he have visited Sunset Hall — Sady’s house?
Houdini scholar Cox has also found evidence that Leopold may not have thought much of his brother Houdini. An interview with a woman who knew Leopold’s office nurse revealed that Dr. Weiss did not speak well of his brother. She reported Leopold had said Houdini “was an embarrassment to the family because he was a magician.”
Cox wondered about this. “Possibly Leo felt entertainment was a lowly profession compared to his own,” he wrote. “Or maybe the hard feelings between the brothers went both ways. But it’s fascinating to hear what Leo had to say because, until now, we’ve only heard Houdini’s side of the feud.”
Compounding the mystery of whether or why Houdini would visit Ridgefield is the account of Richard E. Venus, former Ridgefield town historian. In a Dick’s Dispatch column in The Ridgefield Press in 1987, Venus wrote that Houdini and his wife, Bess, “spent many weekends at his brother’s Ridgefield home. I recall seeing him as he stopped in the local stores on a Saturday morning. On one occasion, I sold Houdini a Ridgefield Press.”
Adding still more to the mystery is the fact that Sady and Leopold themselves were not on the best of terms during the 1920s, according to testimony during their 1932 divorce proceedings.
The divorce battle was ugly. Leopold, who brought the suit against Sady, charged that she would spend weekends at Sunset Hall and another country home she had in Ossining with either of two boyfriends 20 years younger than her. Sady’s butler told Leopold he often served Sady and her lover breakfast in bed. One boyfriend was named “Locke Lorraine,” according to the suit.
Leopold also:
Sady in response charged that:
After their divorce — whose settlement is unknown — Sady lived on West 59th Street in Manhattan until her death in 1935 at the age of 54.
Leopold continued his radiology practice until 1949 when he retired because of increasing blindness — due, it’s been suggested, to his exposure to x-rays. He eventually began running low on money and on Oct. 5, 1962, Dr. Weiss jumped off the roof of his apartment building, killing himself. He was 70 years old.
“Leo left all his worldly goods to his long-time, former nurse, Marguerite Elliott,” John Cox reported. “But Marguerite’s husband forbad her from accepting, so all that was left of the last living Weiss sibling was thrown out.”
Even though Houdini had supposedly banned him from the family plot in Machpelah Cemetery in Queens 38 years earlier, Leopold was buried there.
The whereabouts of Sady’s remains are unknown.

Groundbreaking research, Jack! So much here I never knew. Thank you.