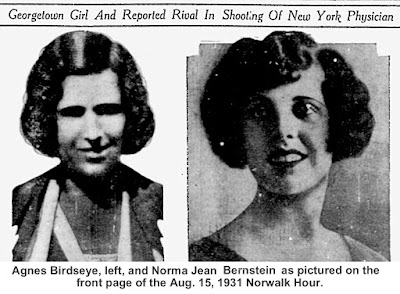 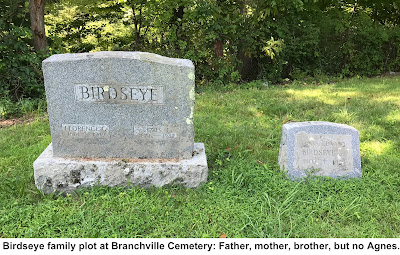 standing on Nov. 18, 1934, when a state official did a survey of all the monuments in Branchville Cemetery.

It has since vanished. Instead, there are monuments for her parents, Lewis, who died in 1942, and Florence, 1949, along with her brother, Lewis Jr., who died in 1958.
Also buried in the Birdseye plot is Dr. Archibald Abernethy, a native of Canada, who was a physician at the Norwich State Tuberculosis Sanitarium. Around 1930, he married Agnes’s sister, Elizabeth, probably a nurse at the same facility, and died two years later — less than a year after Agnes’s death. (His wife is not in Branchville, however; she later married Peter Thornton and moved to Florida where she died in 1980.)
What happened to the gravestone of Agnes Birdseye? Perhaps it was removed by members of the family who grew to be embarrassed by her tragic end. More likely the family removed it because they didn’t want sensation-seeking members of the public ghoulishly gawking at her gravesite.
However, it may even have been stolen by a souvenir seeker after the story resurfaced in newspapers across the country in 1936 when Milton Thomashefsky died.
A year after his daughter’s tragic death, and perhaps as a result of it, Lewis Birdseye left the world of hospital administration to become a social worker with the St. John’s Guild, a charitable organization sponsored by the Episcopal Church that focused on helping underprivileged children.
He became widely known among the poor in New York City when he managed the guild’s Floating Hospital, a ship that mixed recreation with medical assistance. Thousands of city children in the summer took trips on the vessel, getting exposure to fresh air and the sea, and in the process receivings checkups and screenings from physicians and nurses on board. At the same time staff members would instruct parents in good child-rearing practices.
The Floating Hospital is still in operation today.