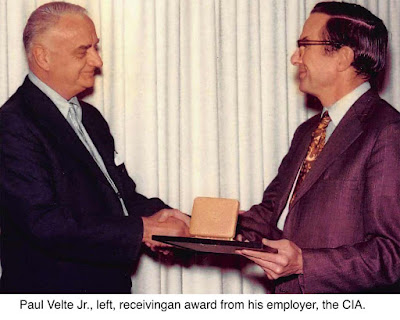 Paul C. Velte Jr.:
Escape from Saigon
Paul C. Velte Jr. led a quiet life in Ridgefield, serving as a scoutmaster, a church building committee chairman, and even a justice of the peace. But his last job was anything but quiet: Working for the CIA, he orchestrated the evacuation of more than 1,000 Americans in the final hours of the U.S. presence in Vietnam.
Velte was CEO of Air America, a large airline that was secretly owned by the Central Intelligence Agency and used for a variety of missions in Southeast Asia. During the war years, Air America had flown civilians, diplomats, spies, doctors, refugees, commandos, drug enforcement agents, injured soldiers, and even Richard M. Nixon. But its last mission was rescuing Americans from Saigon as the city was about to fall to North Vietnamese troops.
On April 29, 1975, the South Vietnamese capital became the scene of what has been called the largest helicopter evacuation in history. “Two United States Marine Corps helicopter squadrons, ten U.S. Air Force helicopters, and Air America carried out 1,373 Americans and 5,595 people of other nationalities,” wrote William Leary and E. Merton Coulter in MHQ, a military history magazine.
Velte didn’t direct operations from the headquarters in Washington: He was on the ground in

Vietnam, often in situations where he, his pilots and staff were under fire, such as at Tan Son Nhut airport just outside the city. He planned to supply 28 Air America Bell UH-1 “Huey” helicopters that were light enough to land on buildings; the larger Marine copters, used for most of the evacuation flights, were too heavy for many buildings to support.

“Because of a shortage of pilots, many of these helicopters would have to be flown by a single pilot,” Leary and Coulter wrote. “According to the U.S. Air Force account of the final evacuation, ‘This was risky, but Air America was accustomed to such risks and expressed no reservations about that aspect of the Saigon air evacuation.’”
Velte had to deal not only with the enemy fire, but also with political and other problems. U.S. Ambassador Graham Martin hesitated for days to act on evacuation planning. There was a lack of adequate fuel to keep the Hueys going. The military refused to protect Air America’s helicopters, and the North Vietnamese subsequently stole some of those undefended aircraft.
In mid-April Velte had tried to get the Air Force to arrange for an aircraft carrier to be offshore to serve as an operating base in case his helicopters were needed for the evacuation and the Tan Son Nhut airport was under attack or overtaken.
“The baby carrier,” he told the Air Force, “had the necessary machine shops to do repair work, had fuel, and had mobility. It could move up and down the coast and would allow Air America to perform its missions as required.”
An Air Force general said the carrier could not be provided, but then tried to arrange for 30 Marine pilots to serve as copilots on the Air America helicopters. Ambassador Martin, still reluctant to admit Saigon was about to fall, vetoed the plan for copilots.
Martin was later criticized for delaying the evacuation planning and execution—even though most of South Vietnam had already fallen to the North. “Faced with imminent disaster,” Secretary of State Henry Kissinger wrote, “Martin decided to go down with the ship…. I considered Martin’s stonewalling dangerous.”
In the end Air America, down to around 13 helicopters, still managed to evacuate more than 1,000 Americans and Vietnamese to offshore ships or to locations on land where the bigger Marine copters could ferry them to vessels.
“That was no small accomplishment, to be sure,” said a CIA analyst named Frank Snepp, “particularly in view of the fact that the maximum capacity of each Huey was barely 12 people.”
According to Velte’s grandson, David Wilson, his grandfather “was on the last helicopter out of Saigon with nothing but a .45 pistol and a pair of underwear.”
The end of the Vietnam conflict also spelled the end of Air America. On May 5, 1975, CIA Director William Colby cabled Velte: “The withdrawal from Vietnam draws to a conclusion Air America’s operational activities.”
He added a few words of praise for the staff. “Air America, appropriately named, has served its country well,” he said.
However, “the pilots never heard even that modest accolade,” wrote Leary and Coulter. “The CIA would not publicly acknowledge its ownership of the airline for another year, and it would not issue a commendation to these secret soldiers of the Cold War until 2001.”
A native of New York City, Paul Christian Velte Jr. was born in 1914. He was a Pace College 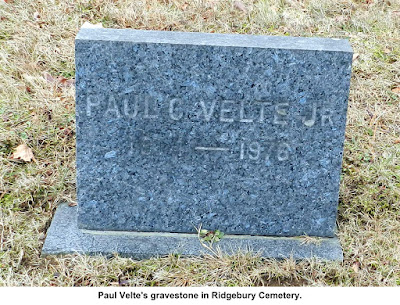 graduate and World War II Navy veteran who had worked as an executive for Pan American Airlines before joining Air America. He was based in Taipei, Taiwan, and later at the main Air America headquarters in Washington, but had also maintained a home in Ridgefield from 1955 until his death at age 62 in 1976—the same year the CIA officially dissolved Air America.

His contributions to aviation were recognized in Who’s Who in America, but his contribution to the largest helicopter evacuation in history has gone largely unnoticed or unheralded.
He is buried in Ridgebury Cemetery where a small monument marks his grave.