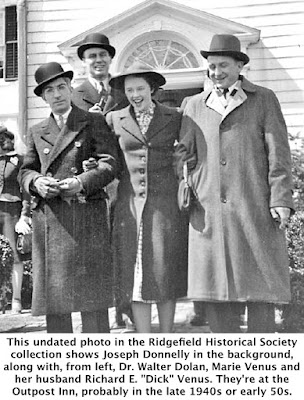 Joseph H. Donnelly:
The First Lawyer
Joe Donnelly made quite a name for himself in Ridgefield. In fact, he made several names for himself.
Ridgefield’s first full-time practicing attorney and one of its most astute real estate entrepreneurs had a career that lasted more than 60 years and included countless hours of public service, both with Ridgefield government and in numerous community organizations.
“He was really good to an awful lot of people, and helped an awful lot of people — behind the scenes,” said Paul S. McNamara, who had been his partner for many years. “He was reserved and preferred to remain anonymous.”
Even so, his name does appear on three town roads.
Joseph Henry Donnelly was born in 1906 in Bridgeport, got his bachelor’s and law degrees

from Columbia University, and went to work for his brother’s  prestigious law firm in Bridgeport.

In July 1931, when he was only 24 years old, he decided to strike out on his own and arrived in Ridgefield in “an old Pontiac,” recalled former town historian Richard E. Venus. He lived at Ashland Cottage, the Victorian house just south of the St. Stephen’s campus where once another attorney had lived. While Samuel “Lawyer Sam” Keeler was a full-time attorney, he had practiced only in New York City; the newcomer, the town’s only local lawyer, was the first to live and practice full-time in Ridgefield.
After his marriage to Ellen Gavin, whom he had met at Columbia, Donnelly moved to a house on West Mountain Road. Later he bought a farm on Wilton Road West, part of which he eventually developed into a subdivision served by Donnelly Drive — one of three roads in town using his name.
Soon after his arrival Judge Donnelly became active in his new community. He was named the town attorney in 1935, serving until 1948 and again for a year in the late 1960s.
From 1941 to 1949 he was judge of probate, an elective office that was the source of the judicial title that stuck over the years — many people referred to him as “Judge Donnelly” long after he stopped being a probate judge.
For many years, he was involved in the drive to bring zoning to Ridgefield and was in the forefront of the campaign that led to zoning’s adoption in 1946. The ordinance he championed was written by his brother, John V. Donnelly, who was city attorney of Bridgeport and whose law firm broke in many of the state’s top trial lawyers, not to mention his own brother.
Joe Donnelly served in many other government posts including on a charter revision commission and the Police Commission. He was Ridgefield’s state representative from 1939 to 1941, and a prosecutor in the town’s Trial Justice Court in the 1940s. He was active in the Republican party, serving for a while as town chairman. He was a frequent moderator of town meetings.
Real estate was one of Donnelly’s long-standing interests and over the years he amassed a lot 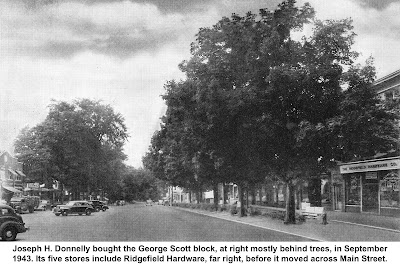 of property. Though he had sold off some by the time of his death, he was still one of the town’s top 10 taxpayers — most of the other nine were corporations.

Among his earliest purchases was the commercial block belonging to Judge George G. Scott, whom he succeeded as probate judge. The block, which he acquired in 1943, consists of stores and offices between the Masonic Hall and the old Bissell building, which today includes Craig’s Jewelers, Shine Hair Salon and Rodier Flowers. He bought the land behind this in the mid-1950s and built the “Donnelly Shopping Center” that now houses the Ridgefield Thrift Shop, Ancona’s Wines and Liquors, Ridgefield Music, Colby’s, and other shops but had originally been home to Woolworth’s and First National.
He was involved in the development of Ridgefield Commerce Park on Danbury Road, and several subdivisions. Among these were the 1950s Scodon development in Ridgebury that includes Scodon Drive (he was the “don” while Ridgefield Savings Bank president Carlton Scofield was the “sco”).
With jeweler Francis D. Martin and real estate and insurance broker Arthur J. Carnall, he developed the road that’s named from the first three letters of the threesome’s surnames: Marcardon Avenue. Martin, also a large investor in real estate, was once Donnelly’s landlord — the judge’s first office was over today’s Planet Pizza in the Tudoresque building then owned by Martin.
Later, Judge Donnelly acquired Gov.  Phineas Lounsbury’s one-time home on Governor Street and converted it to offices, which included his own firm of Donnelly, McNamara and Gustafson (now practicing from the Ridgefield Bank building on Danbury Road).
Through his involvement in real estate, both in representing clients and in his own dealings, 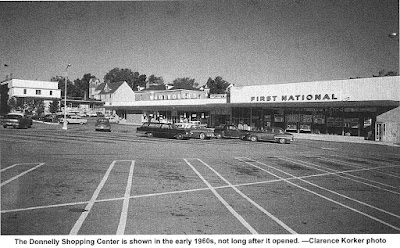 he became perhaps the foremost authority on property in town, and some said his records were better than town hall’s. He maintained thousands of property records, first on three-by-five cards and later on microfilm. As historian Dick Venus observed, “he could search a title without leaving his office.”

“He was one of the best real estate lawyers,” said attorney John E. Dowling, who’d also been a probate judge. “He could tell you the deal on a closing many years after. Joe was a detail man.”
Donnelly’s business interests included the Cadillac dealership on Danbury Road, which he and Irving B. Conklin Sr. operated in the early 1950s; it later became Kellogg-Thiess. He had also served on the boards of directors of several banks.
“He spent an awful lot of time on local organizations, helping the town,” said McNamara. Among the many civic groups for which he volunteered were the Salvation Army, the District Nursing Association, the Ridgefield and Fairlawn Cemetery Associations, and the Knights of Columbus. He was an honorary life member of the Ridgefield Volunteer Fire Department. During World War II he was on the Ration Board and the Selective Service Committee.
He belonged to St. Mary’s Parish, but was ecumenical in his assistance.  “He helped a lot of churches of all denominations,” said Dowling. “He did a lot of work for them and I don’t think he ever charged them for it.”
An avid golfer, Donnelly was a charter member of the Silver Spring Country Club.
“We used to play golf together,” Dowling recalled. “It used to be the lawyers against the bankers. Joe and I would play Scofield and (Frank) Warner.” Other Ridgefield businessmen who’d often be among his golfing partners or competitors included Abe Morelli, Reed F. Shields, Arthur Carnall, Fred Orrico, and Charles Coles.
In 1980 Donnelly was honored on his 50-year membership in the Connecticut Bar. He died in 1992 at the age of 85.
One of Joe Donnelly’s favorite legal cases  — and one he enjoyed recollecting — was his service as administrator of the estate of an 85-year-old Bethel woman named Helen Dow Peck. In 1955, Mrs. Peck bequeathed $180,000 ($1.7 million in 2018) to someone named John Gale Forbes, whom she’d “met” many years earlier via a Ouija board she had purchased at a toy store in 1919.
The bizarre case drew widespread publicity, especially after nine nieces and nephews appealed the bequest on the grounds that Mrs. Peck “did not have the right use of her reason when she executed her will,” giving a small fortune to a “spirit” she’d never seen in person.
The appeal went all the way to the state Supreme Court of Errors, and the relatives, represented by Dowling, won.
The case “was on the Connecticut Bar exam at least once,” Dowling said with a smile.