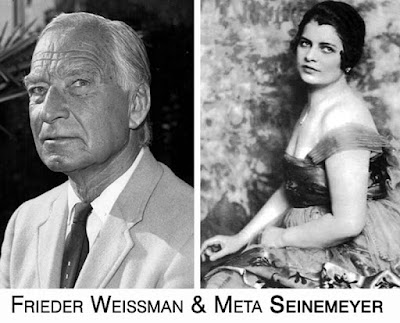 Frieder Weissmann:
World Conductor
In the 1960s and 70s, Ridgefielders frequently encountered an elegant, elderly couple strolling the village sidewalks. Many thought they made a cute pair. Few recognized the man as a conductor of most of the world’s leading concert and opera orchestras.
Over his long career, Frieder Weissmann once estimated, he had contributed to more than 4,000 classical music recordings, most of them in Germany in the 1920s.
A native of Germany, Dr. Weissmann was born in 1893, studied at Heidelberg, Munich, Grenoble, and Geneva, and began his conducting career at the State Opera of Berlin while in his 20s. In 1932 and 1933, he was a guest conductor of the Berlin Philharmonic, which the likes of Brahms, Dvorak, Grieg, and Mahler had also led.
But with rising anti-Semitic sentiments in Germany, he left the country in 1933, arriving first in Holland where he led the Concertgebouw in some concerts, and then spent several years in Argentina where he met and married his second wife, Rosita “Rose” Chevallier Boutell, an actress and daughter of a well-known Argentine soccer player. (He married his first wife, popular German opera star Meta Seinemeyer, as she was dying of leukemia at the age of 33.)
During the next three decades, he conducted orchestras throughout North and South America, including almost every major American symphony orchestra. In this country he recorded for such labels as RCA Victor, Decca, Columbia, and Odeon. Many of his recordings are still being sold today.
The Weissmanns came to Ridgefield around 1960, summering at The Elms Inn  for nine years and then living full-time on Prospect Ridge.
“It is the most secretly guarded, God-given talent which enables you to stand in front of 100 men and without a word, only with the movement of your eyes, evoke from them as from one person the utmost of expression of delight, of harshness, of piano, of forte, of anything that might be contained in human nature,” Dr. Weissmann said in a 1966 Ridgefield Press interview.
The late Tom Belote, a Ridgefield attorney and historian who knew Weissmann when the conductor lived at The Elms, confirmed the power of the maestro’s eyes.  “He had blue eyes and used them when he talked to people,”  Belote recalled.  “It was impressive.”
Belote added, “He also used his cane in later years as he would have used a conductor’s baton. He would wave it while standing on the street to wave down a car for a ride. He would also use it in the restaurant and stamp it in the floor while he was sitting if he wanted something from a waiter.”
He was “a person of style and quality so obvious it demanded respect,” said Peter Laurence Cooper, who worked at The Elms when Weissmann was a frequent customer.
Dr. Weissmann continued to travel and conduct orchestras well into his 80s. “I’ll stop when I am dead,” he once said.
Rose Weissmann died here in 1980, and is buried in Ridgebury Cemetery. Two years later, Frieder moved to Amsterdam, where he died in 1984 at the age of 91.