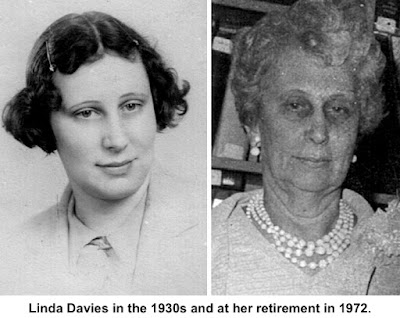 Linda Davies:
A Long Career and Memory
Linda Davies was one of the last of a long line of educators who were born in Ridgefield, grew up in the town,  and spent their lives teaching here. In her case, that career lasted nearly a half century.
As a 20-year-old in 1930,  Davies began instructing first through fourth graders at the two-room Branchville Schoolhouse, which still stands along Old Branchville Road. She went on to teach for 42 years. “Even after her retirement, she came back and served as a substitute for a number of years,” said former schools personnel director Paul Hazel. “What a delightful thing that is.”
Margaret Linda Davies was born here the day before Christmas in 1909, a daughter of William and Jenny Tait Davies. Her father, an immigrant from England who was an estate gardener, and her mother, who was born in Northern Ireland, had each left school after the fourth grade.
She attended Ridgefield schools and graduated from Ridgefield High School in 1928. She then studied in the teaching program at Danbury Normal School, now Western Connecticut State University, for two years and began working at Branchville. By the 1950s, she was teaching fifth grade at the new Veterans Park School and when she retired in 1972, was a social studies teacher at East Ridge Junior High School.
Over the years she had continued her studies, receiving a bachelor's degree from Teachers College at Columbia University in 1939 and a master's degree there two years later. She did advanced graduate studies at New York University, Eastern Connecticut State College, UConn, and Fairfield University.
She considered teaching a difficult but rewarding experience. "The processes of child development are extremely complex," she told a Press interviewer in 1955. “One of the greatest sources of satisfaction to the teacher is in noting [a child’s] improvement and realizing that she or he, through study and evaluation, has had an opportunity to be of some assistance in helping the child to make these gains, whether they be social, emotional, educational, or other."
Davies was active in many Ridgefield organizations, including the Sunshine Society, the OWLS, the Friends of the Library,  the old Grange chapter, and the Keeler Tavern, where she was a cashier for the gift shop. She lived for many years on  Ramapoo Hill Road
Davies belonged to the First Congregational Church where she was a member of the Women's Fellowship. “She was a very dynamic and practical lady,” said Dotty Hall, a fellow church member. “She had good sense and she always had the right answers.”
Davies had a lifelong interest  in politics. In 1978, she was selected as a senior intern to serve in the U.S Congress in Washington, D.C., from the Fifth Congressional District.
She was also an avid traveler and in her younger years, was an active bowler.
She died in 2000 at a nursing home in Mansfield at the age of 90.
Linda Davies was another oldtimer who was valued for her memory of the past. She could recall many details of what life in the village was like long before Main Street was even paved. She knew the people and places well, and had a collection of early photos of the town. She “maintained a vast knowledge of the history and people of Ridgefield,” a family member said.
For seven years, she aided the Ridgefield Archives Committee — forerunner of the Ridgefield Historical Society — in its efforts to identify thousands of old Joseph Hartmann photographs of the town and its people from early in the century. “She knew everything,” said Kay Ables of the Archives Committee and now town historian. “She knew all the people all the stories. She had all this information in her head.”