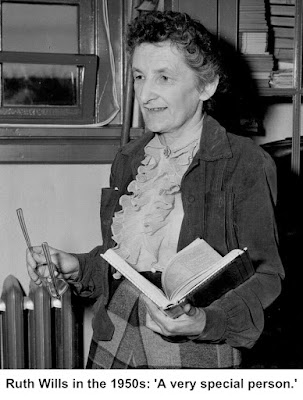 Ruth Wills:
Legendary Latin Teacher
Ruth Wills was a scholarly woman whose advanced Latin students often excelled statewide. The five-foot-tall teacher was also tough: She had no problem grabbing a hulking, misbehaving football player and dragging him to the principal’s office.
“When Ruth let you have both barrels, it didn’t matter if you were a 245-pound tackle on the football team, you quaked,” recalled a former colleague, Dirk Bollenback, former chairman of the Social Studies Department.
“She was a very, very special person,” added Bollenback. “I never met anyone on the Ridgefield High School staff who didn’t have the highest respect for Ruth Wills.”
Ruth Ella Wills was born in Monson, Mass., in 1897. She graduated from Colby College in 1920 and that September, came to Ridgefield’s Hamilton High School a few years after the town’s first secondary school had opened. The two-story frame building stood on Bailey Avenue where  there’s now a municipal parking lot. When the school moved to East Ridge and took the name Ridgefield High School, Wills continued to work there until her retirement in 1965.
Over her 45-year career, she taught Latin, French, German, and English. In later years, however, she taught only Latin. “Year after year her advanced students would score the highest in the state of Connecticut in the Latin Achievement tests,” Bollenback said.
She was famous as a strict disciplinarian. Although diminutive in size, Wills “scared some of the biggest guys in Ridgefield,” recalled Town Clerk Barbara Serfilippi, a 1960 graduate of the high school. “She was a little lady but, boy, you didn’t mess with her."
Despite that reputation for discipline, she was also known for her quiet sense of humor. Among her favorite stories was one about a Latin II test in which her student, in answer to a question about the second periphrastic conjugation, wrote, “This construction is known as the second pair of elastics.”
Wills was a woman of many interests. She spoke several languages fluently, followed foreign affairs closely, collected antique foreign coins, knitted, did crossword puzzles, read extensively, and was an avid fan of the New York Rangers, the New York Knicks, and  — in their day — the Brooklyn Dodgers. She also surprised many ex-students by being sighted at the old Danbury fairgrounds race track  — she was an avid fan of midget class auto racing.
When, in a 1954 interview, Wills was asked what she liked most about teaching, she replied in one sentence: “It is very gratifying to know that perhaps in some small way I have been able to help various students to attain and achieve their goal toward a happy, democratic way of life.”
Her work and her interests couldn’t have hurt her health: When she died in 2000 (the same day as her longtime colleague Linda Davies), she was 102 years old.