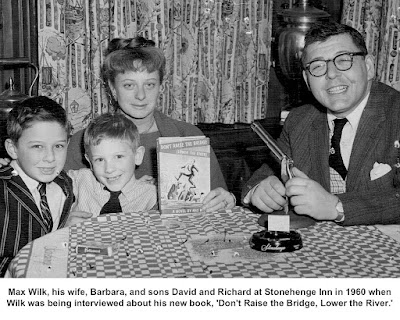 Max Wilk:
A Man of Memories
“My mind is a repository of memories, of cameos and anecdotes,” Max Wilk said in 1997. “Nightly, I entertain a cast of thousands. Usually, at about 4 a.m., they arrive.”
Then 77, Wilk was still doing what he had done for years – write books and scripts, and write them with a sense of humor.
The son of a literary agent and Warner Brothers story editor,  Wilk was born in 1920, grew up in Minnesota, and studied drama at Yale. He served in the Army in World War II with a Hollywood motion picture unit, and wrote training films starring the likes of Alan Ladd, Clark Gable, and Jimmy Stewart. After the war, he worked on Broadway and, starting in 1948, became a pioneer in television, writing skits for comedians like Ed Wynn, Victor Borge, Art Carney, and Jonathan Winters.
He and his family moved to Silver Spring Road in 1951 and here he wrote his first book, “Don’t Raise the Bridge, Lower the River,” published in 1960. “While the locale of this book is Connecticut, it has nothing of importance to say about Suburbia, Exurbia, or the stifling wave of Middle Class Conformity which, it is augured, will soon engulf the whole of Fairfield County,” the jacket says.
Nonetheless, local readers could see many lighthearted slices of 1950s Ridgefield life in his portrait of Green Haven and an innkeeper (loosely based on Walter Tode’s Inn on West Lane, now Bernard’s). The book was turned into a movie starring Jerry Lewis, but its setting was changed from a Ridgefield-like town to London, England!
Wilk went on to write nearly 20 books with such titles as “The Golden Age of Television: Notes from Survivors” and “They’re Playing Our Song: Conversations with America’s Classic Songwriters.” He wrote the novelization of The Beatles’ cartoon movie, “Yellow Submarine.”  His novel, “Help, Help, Help,” also contains anecdotes based on living in Ridgefield.
He  also wrote many TV shows and his CBS special, “The Fabulous Fifties,” won an Emmy, a Peabody and a Writers Guild Award.
Wilk and his wife, Barbara, an artist who exhibited nationally and who had received the President’s Volunteer Action Award for community service, moved in 1966 to Westport where Wilk died in  2011 at the age of 91.