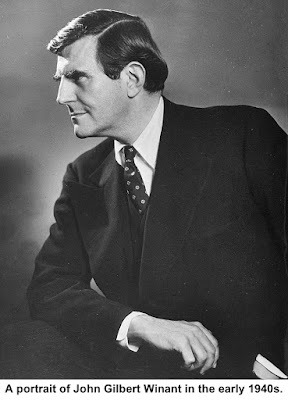 John Winant:
A Man of Merit
To Ridgefielders early in the 20th Century, he was Gil Winant, the catcher on a team of teenagers from the Ridgefield Club. To the King of England three decades later, he was Ambassador Winant, the man who splendidly represented the United States during Britain’s darkest hour.
John Gilbert Winant was born in 1889 in New York City, a son of a wealthy real estate executive. Starting around 1907 when he was in his teens, he would spend his summers in Ridgefield with his family, who occupied what became the Peaceable Street estate of B. Ogden Chisolm. Later the family acquired a farm in nearby South Salem.
The Winants were undoubtedly drawn to Ridgefield because John’s mother, Jeannette 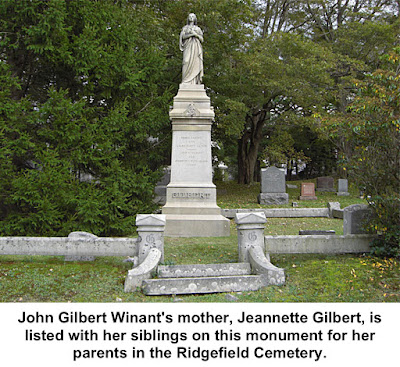 Gilbert Winant, came from an old Ridgefield family. Jeannette’s parents were John A. and Jeannette Wilkie Gilbert, who have a huge monument in Ridgefield Cemetery. While the monument lists John and Jeannette and their children, including daughter Jeannette, it is most likely a memorial; none of the family named on the obelisk is actually buried in the plot.

Winant and his three brothers belonged to the Ridgefield Club whose headquarters later became the Congregational Church House that burned in 1978. “The club had a fine ball team  for several summers and the Winants made up about one-third of it,” The Ridgefield Press reported in 1941. Among the other players was a young Francis D. Martin, who became a longtime Ridgefield businessman;  Gil Winant caught Marty’s pitches.
Throughout most of his life, John Gilbert Winant would visit relatives and friends in Ridgefield.
Winant attended St. Paul’s School in Concord, N.H., which apparently introduced him to the 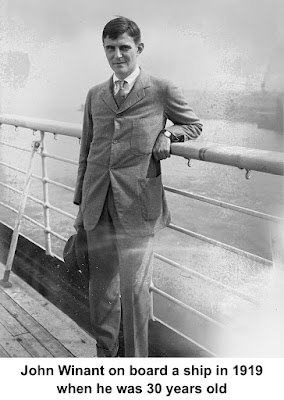 state that was to become his home. After studying at Princeton, where one of his history professors was Woodrow Wilson, he left to take a position at St. Paul’s, teaching history. In 1916, he got his first taste of politics when he was elected to the New Hampshire House of Representatives.

However, a year later, with war looming, Winant joined the U.S. Army Air Service and was trained as a pilot. He wound up a captain, commanding the 8th Aero Observation Squadron in France.
After the war he returned to St. Paul’s and to politics; he was elected to the New Hampshire Senate in 1920. Five years later he was won a two-year term as governor of New Hampshire, the youngest person ever elected the state’s governor and the first to serve three terms. He was elected again in 1931 and 1933 at the beginning of the Depression, and though a Republican, “was quick to support President Roosevelt when the latter established the National Recovery Administration,” The New York Times reported. “This he did in the face of expressed disapproval of many rock-ribbed Republicans.”
While governor, The Times said, “Winant introduced many social and labor innovations that later were to become Federal laws. These included a minimum wage law, a state relief bill, aid to dependent children, and creation of the second state planning board in the country.”
Under Winant, New Hampshire was the first state in the nation to fill its enrollment quota in the Civilian Conservation Corps.
He also  limited the number of hours that women and children could work, and fought for transparency in government.  “Dismayed by the closed-door executive council meetings, he snuck a local reporter into the meeting, and the journalist wrote a front-page story on the council’s deliberations,” wrote Elizabeth Kendall in a profile of Winant.  “The meetings became open to the public as they remain today.”
New Hampshire historian Richard Hesse said Winant “was an excellent leader. He was very thoughtful and he could sit down and talk to a number of people who didn’t agree, and somehow bring them together.”
Winant himself said, “Concentrate on the things that unite humanity rather than on the things that divide it.”
His progressive thinking did not go unnoticed by President Roosevelt who in 1935 appointed Winant the first head of the new Social Security Board. Two years later he became U.S. representative to International Labor Office in Geneva, Switzerland, where he was elected director-general in 1939.
In 1941, as England was at war with Germany, Roosevelt picked Winant as U.S. ambassador to Britain, replacing Joseph P. Kennedy (father of John F. Kennedy). Kennedy had favored 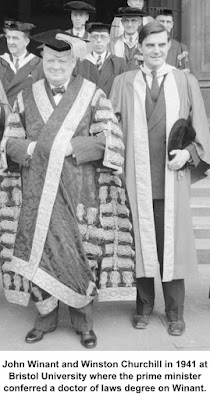 appeasement of Germany while Winant made no secret that he and his government considered Germany the enemy.

The Times in 1941 offered this analysis of the appointment. “The President, convinced that the war was causing fundamental social changes in England, desired as his representative in London a man of liberal mold intimately acquainted with the British labor leaders. Mr. Winant established such friendly relations as American representative to the International Labor Office and as its director since 1939...For this reason, as well as personal attributes — to his friends Mr. Winant seems to bear a moral and physical resemblance to Abraham Lincoln — the appointment is said to have been urged upon the President by Justice Frankfurter of the Supreme Court and others.”
Winant quickly won the hearts of the British people. When he arrived in England — which 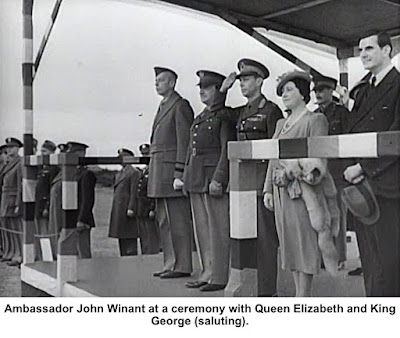 was being bombed daily by the Germans — he declared at the airport: “I am very glad to be here. There is no place I’d rather be at this time than in England.” That statement was quoted on the front page of virtually every newspaper in that war-torn country.

“Winant lived modestly in London despite his station and traveled widely despite the Blitz,” said the Nashua (N.H.) Telegraph in a 2010 article.  “He became a familiar figure at bombed buildings, helping where he could. He preferred conversing with janitors and waiters to rubbing elbows with the high-born.”
Nonetheless, he wound up becoming close to King George VI and especially to Prime Minister Winston Churchill — he was with Churchill when both men learned that Pearl Harbor had been attacked; the two were excited because they knew it meant the United States would enter the war.
Winant spent many weekends at the prime minister’s country estate, Chequers Court, where he met and soon fell in love with Churchill’s daughter, Sarah, an actress 25 years his junior. According to an article published by the New England Historical Society, “They spent as much time 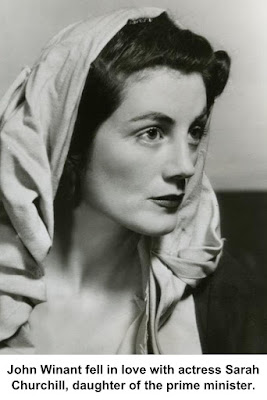 as they could together. They danced after dinner at wartime conferences in Cairo and Teheran, and saw each other in London, where her apartment was a five-minute walk from the U.S. embassy in Grosvenor Square. They were terrified of scandal and tried to keep the affair quiet.”

Sarah Churchill was separated from her comedian husband and Winant was married to Constance Rivington Russell, a former New York socialite, who was back in New Hampshire. Their marriage had been troubled from early on. “She loved Paris and parties, he loved Concord and social reform,” the historical society said.
After the war, Winant resigned as ambassador, took an apartment in London and told Sarah he would seek a divorce so they could be married. Sarah declined the offer. Winant was heart-broken.
For a while Winant served as U.S. representative to UNESCO. However, biographers have reported that he had hoped to be appointed the first secretary-general of the newly formed United Nations, and was disappointed when Trygve Lie of Norway got the post.
In early 1947, he left public life and retired to his home on Pleasant Street in Concord.  In her 2010 book, “Citizens of London: The Americans Who Stood with Britain in Its Darkest, Finest Hour,” Lynne Olson said Winant “was an exhausted, sick man.” He was estranged from his wife, depressed over the outcome of his affair with Sarah Churchill, saddened at not getting the UN post, and financially broke.
On Nov. 3, 1947 — the day his autobiography, “Letter from Grosvenor Square,” was published — Winant went into a bedroom in his Concord home and shot himself in the head. He was 58 years old. Sarah Churchill, who had talked to Winant on the phone only a few days earlier, blamed herself for his death.
Winant wanted to be buried on the grounds of St. Paul’s School, but because he was a suicide, the Episcopal institution would not allow it and he was buried in a Concord cemetery. Twenty years later the school had change of heart, and Winant’s casket was moved to St. Paul’s.
Winant’s service and support of England was so appreciated by the English that, a year after his death, he was made an honorary member of the British Order of Merit. He was only the second — and the last — American to be so honored; the other OM was Dwight D. Eisenhower.
Throughout his life, John Winant was famous for his generosity. When he left for the war in 1917, he asked a friend to take care of his affairs. The friend was amazed to find a huge monthly bill for milk — Winant had been providing daily deliveries to needy families in the area. On his way to 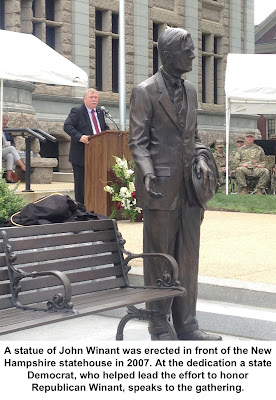 the station to go to New York one day, he ran into a former maid at St. Paul’s who was financially destitute. He gave her all his cash and wound up having to borrow money at the station to buy his ticket. He often gave money to poor people outside the Statehouse and would tell the Concord police to buy breakfast for homeless people and send him the bill.

In 2007, 60 years after his death, a statue of John Gilbert Winant was erected in front of the State House in Concord.
“Imagine if you can that he is here with us, right now, uncomfortably listening to us recount his good deeds,” said Mike Hirschfeld, rector of St. Paul’s School, during the dedication ceremony. “In my mind’s eye, I can see him shuffling uneasily, and awkwardly looking down at his feet, embarrassed by our praise.”