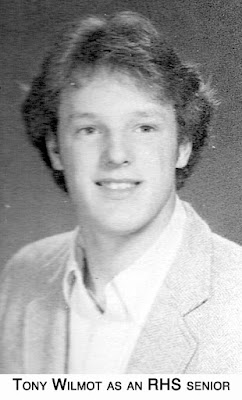 Tony Wilmot:
Mr. Baseball
If anyone could be called Mr. Baseball in Ridgefield during the last quarter of the 20th Century, it was Anthony “Tony” Wilmot. He not only starred on the local and collegiate diamonds, but coached winning Ridgefield High School teams.
Wilmot was born in Greenwich in 1963, the sixth and last child of Clifford and Jeremy Wilmot — his mother was a former Ridgefield selectman who was active in efforts to document Ridgefield history and save its historic buildings.
He came to Ridgefield as a child and “exhibited many talents at an early age,” his family said. “He was an acclaimed tennis player and an ardent golfer. But it was when he discovered baseball that he’d found the activity at which he would excel and that would consume him for the rest of his life — first as a player, then a coach and always as a passionate promoter of fair play and healthy competition.”
His talent began being recognized in Little League where he was a top pitcher and once hurled a perfect game.  He was captain of the varsity baseball team at Ridgefield High School, where he graduated in 1982. He earned a scholarship to Texas Christian University, where he was captain of the NCAA Division I baseball team and where he earned his bachelor’s degree in 1986.
“Tony set the school single-season record for total hits and extra base hits,” Tom Belote said when Wilmot was honored by the Ridgefield Old Timers in 2010. “These accomplishments were achieved when TCU was part of the Southwest Conference, a conference considered by many to be the best college baseball conference in the country.”
Wilmot later served as head coach of the RHS varsity baseball team for six years, amassing a 77-43 record. He was also an assistant coach for the Western Connecticut State University Colonials. In addition, he gave his time and talent to the special needs kids who played in the Holland Division of Ridgefield Little League.
After college Wilmot went to work for Anheuser Busch in New York City, but eventually joined with his sister, Jessica, and learned the restaurant business at her Ancient Mariner.
In 2009, Tony and his wife, Kristina Traynor, also a restaurateur, opened their own restaurant, the Bar & Grille on Route 7. It was a sports-oriented establishment, where fans could gather to watch the games on 11 wall-mounted TVs and enjoy food prepared by two graduates of the Culinary Institute of America.
“I didn't want to be a typical sports bar,”  Wilmot said when Bar and Grille opened. “When I think of a sports bar, I think of deep-fried food, banners all over the place, waitresses in referee tops. This restaurant’s nicer than that.”
Tony Wilmot died in 2014 from influenza-related complications. He was 50 years old.