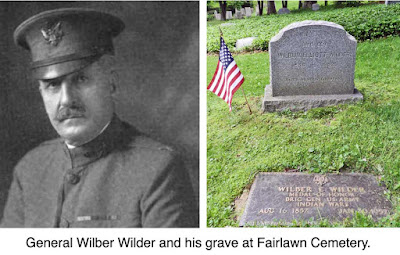 Gen. Wilber E. Wilder:
Medal of Honor Winner
Gen. Wilber E. Wilder, one of three residents who had earned the Congressional Medal of Honor, is the only winner buried in Ridgefield.
In an 1882 battle with the Apaches in Horseshoe Canyon, N.M., General Wilder, then a lieutenant, carried a wounded comrade down the side of a mountain amid a hail of Apache bullets, an act of heroism that earned him the medal in 1896.
“He carried off a wounded soldier who had been left between the Indians and the troops during a forced retreat which the troops had made,” his son Throop M. Wilder wrote at the time of his father’s death many years later.
Born in 1857 in Michigan, Wilder entered the U.S. Military Academy at West Point at the age of 16, graduated in 1877 and was assigned to the Cavalry, soon serving in the American Indian Wars in Arizona, New Mexico, Texas, and the Indian Territories.
In 1886 he was considered a key figure in negotiating the surrender of the Apache chief Geronimo.
“His greatest single exploit was his ride into Geronimo’s camp at the end of a year’s pursuit by General Nelson A. Miles,” his son said. “No one knew whether the Indians would surrender, or whether anyone venturing into their camp to find out would ever return.”
Wilder did return and a surrender was finally agreed to.
By 1895, Wilder was stationed at West Point as adjutant of the Military Academy, but he was soon off to other assignments near and far.
In 1898, in the Spanish-American war he commanded the 14th New York “Volunteers.”
While a captain, he served as acting superintendent of Yellowstone National Park in 1899.
He was sent to Manilla during the Philippine-American War, serving under General Arthur MacArthur (both Arthur and his son, General Douglas MacArthur, were also awarded the Medal of Honor, the first father-son pair to be so honored). For a while Wilder was superintendent of police in Manila.
As colonel of the 5th Cavalry, he was second in command in General Pershing’s Expeditionary Force into Mexico to fight Pancho Villa in 1916.
He served during World War I as brigadier general in France.
Wilder retired in 1927 and came to live quietly for many years at The Elms Inn on Main Street. “He was a very modest man and did not talk about his exploits,” said former town historian Richard E. Venus.
Gen. Wilder died in 1952 and is buried in Fairlawn Cemetery, where a special plaque marks him as a Medal of Honor recipient.