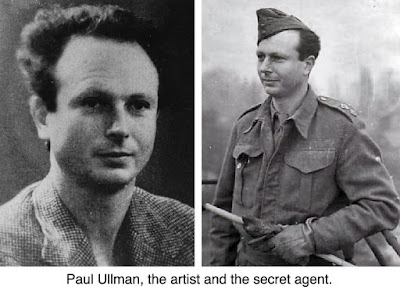 Paul Ullman:
Artist and Patriot
A Ridgefield-based artist-turned-underground fighter died in the service of both his native and adopted countries.
Born in Paris in 1906, Paul Ullman was the son of French artist Eugene-Paul Ullman and American writer Alice Woods. He first came to America as a child in 1914 when war in Europe broke out. While he became a U.S. citizen, he returned to France after the war for his college studies and decided to establish a studio in Paris, painting there from 1928 until 1939.
“He was one of the outstanding young painters of France, belonging to an important group of exhibitors in Paris,” The Ridgefield Press said in 1944. Several books about him and his work have been published, and he has been exhibited at major museums in both the United States and Europe.
After Paris fell, Ullman served in the American Field Service as an ambulance driver. But he, his wife, Babette, and son Jacques were still based in France, and the dangers to Ullman, a Jew, were increasing.
The Ullmans decided to move to the United States and eventually came to Ridgefield to live with his uncle, George Ullman, who, in 1942, bought the large Main Street house (114)  just south of 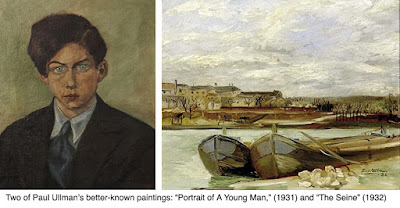 the Keeler Tavern and opposite the fountain. George was the head of General Printing Ink Corporation in New York City, which, in 1945, became Sun Chemical, today the world’s largest producer of printing inks.

A nephew of his father was involved in helping British Intelligence track the activities of German sympathizers and suspected agents in this country, and encouraged  Ullman to join the U.S. Army’s Office of Strategic Services (OSS) soon after it formed in 1942.
Ullman jumped at the opportunity. During his more than a year of training, he was able to occasionally visit his wife and son in Ridgefield.
Because he was fluent in both French and English, the OSS loaned Paul to the Special Operations Executive (SOE), a highly secret British espionage unit. There he underwent extensive training as an underground agent who would serve in France.
Meanwhile, in Ridgefield, his wife Babette became involved in efforts to help her native country. She packed hundreds of boxes of food and clothing for war relief efforts in France and hosted French sailors and other French visitors at the Ullman home.
In the summer of 1944,  she and a family friend, Michael Wills, organized a Quatorze Juillet — Bastille Day — celebration to publicize and support the French war relief effort, reports Constance Crawford, who wrote the biography, “Babette.” They got permission to close off Main Street in the center of town, set out tables with checkered cloths in front of the stores to simulate 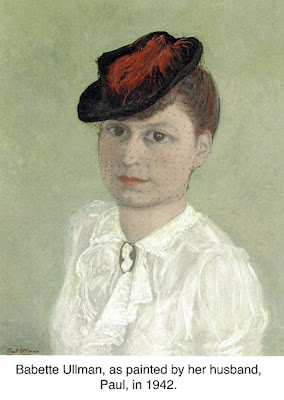 Parisian cafes, and had various celebrities perform — among them was the noted harpsichordist Wanda Landowska. There was dancing in the streets, The Press reported.

While the celebrating was going on, Babette was unaware that her husband had been killed by the Nazis.
In April of 1944 Paul Ullman was parachuted into France near Dijon on a mission to blow up a railroad bridge near Montbeliard.  He was taken to a supposedly safe house belonging to a man named Jean-Pierre Barbier in the village of Valentigney.
On his second night there, the house was surrounded and raided by the Germans.
“Waking, Ullman pulled an overcoat and trousers on over his pajamas and while Madame Barbier was being questioned by the Germans, he jumped from a window,” reports British military historian Paul McCue. “As he made a run for it down the street, however, he was spotted and fired upon, a burst of automatic gunfire from the enemy hitting him from behind in the head.
“Gravely wounded, he was taken to the German military hospital where two bullet wounds to his head were treated and dressed, but Ullman did not recover and died shortly after admission.
“The Germans — reported to be the Gestapo from Belfort — were said to have been looking for the Barbiers' son (the family was very active in the Resistance, but the son was not then at home), rather than an Allied agent. If so, it was remarkably bad fortune that Ullman was spending only his second night in the field in the suspect house.”
The Germans never knew who Ullman was and his body, labeled “unknown,” was quickly released for burial in a local cemetery.  “A positive identification of Ullman was made post-liberation by the American Graves Registration Service from the morgue’s records and photographs and the body was subsequently re-interred in the American Military Cemetery at Epinal,” McCue said.
Ullman was 38 years old when he was killed. He was posthumously awarded the Bronze Star by the U.S. Army, and the Croix de guerre and Legion of Honor by the French government.  At the OSS Memorial Wall at Central Intelligence Agency headquarters in McLean, Va., he is included in the Book of Honor, which lists OSS operatives killed in action.
He died “fighting for the peace of the world and for the love of two countries,” The Press said at his death.
Because of the secrecy surrounding his mission and the agency he worked for, Babette did not learn of her husband’s death until November, seven months later. Devastated, she attempted suicide by drinking a belladonna mixture, which severely sickened but did not kill her.
She eventually married Michael Wills and moved to California. The Wills’s home in Portola Valley was called “Willy Nilly” and became a gathering place for artists, intellectuals and activists, including Nobel laureate Linus Pauling, United Farm Workers leader Cesar Chavez, filmmaker Felix Greene, and author Wallace Stegner.
Babette Ullman Wills died in 2009 at the age of 97.
While she and Michael Wills were happily married until he died in 1994, she told   biographer Crawford that it took her 20 years to get over the loss of Paul Ullman.