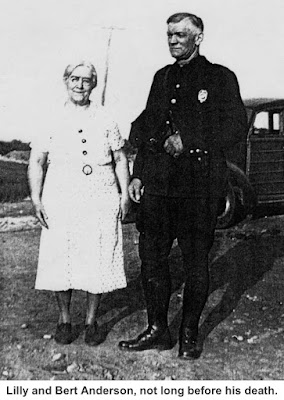 Bert Anderson:
He Died On Duty
Only two Ridgefield police officers have lost their lives while on duty. One of them died in the town hall.
In the days before Ridgefield had its own formal police department, Bert Anderson was the town’s night constable, also called the night watchman, hired to patrol the village mostly on foot during the evening and early morning hours.
Anderson appeared “in excellent spirits” when he stopped by the Ridgefield Bakery at 4 a.m. on Oct. 9, 1939.
A few hours later, workers arriving at the Town Hall found Anderson dead in the constables’ office. He had been shot through the abdomen with his own 41 caliber revolver.
State police from Troop A on East Ridge, led by Lt. Leo F. Carroll and including the medical examiner, Dr. R.W. Lowe, investigated. Based on their findings, county coroner Patrick McIlroy of New Canaan declared that Anderson’s death was accidental.
“Lt. Carroll said Anderson was probably removing his gun belt when the weapon fell to the 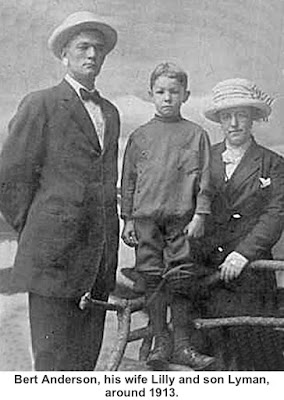 Anderson was 60 years old.
A native of Baltimore, Md.,  Jesse Ebert Anderson was born in 1879 and came to Ridgefield around the turn of the 20th Century. He had been for many years superintendent of Casagmo, the estate of Miss Mary Olcott on Main Street.
In 1905, he married Florence Lillian “Lilly” Whitlock, a local girl. They had two children, including Lyman Ebert Anderson, a longtime Ridgefielder.
Various accounts says Bert Anderson had been chief of the Ridgefield Fire Department, but no record of that could be found. However, his grandson, Rodney A. Anderson, was chief  in 1972-73.
The other ill-fated officer was John Palmer.