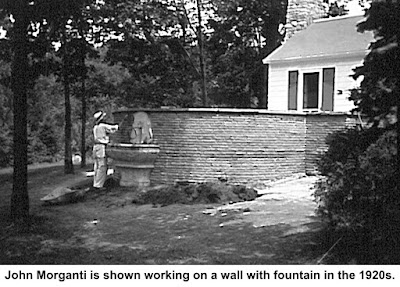 John Morganti:
A Solid Foundation
Giovanni Silvio Morganti was a teenager from Italy who spoke hardly a word of English when he arrived in America. Yet John Morganti, as he came to be known, fathered a multimillion dollar company and a family that have both been major forces in the shaping of Ridgefield in the 20th Century.
However, three times over the years he came close to dying — from disease, from war and from a fire. He survived to be 78.
Born in 1887 in Tomba, Italy, John Morganti got off the boat from Genoa on the morning of 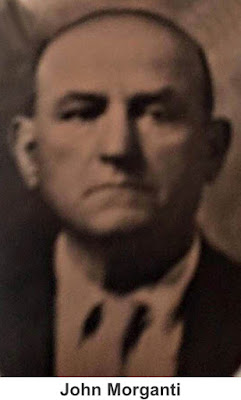 April 17, 1903, with about $50 in his pocket. He was only 15 years old. He took a train from New York to Ridgefield and that afternoon, was hard at work on building the new sewer lines in the village.

After some jobs in New Haven and then two years laboring at the Ridgefield Electric Company’s powerhouse alongside the old railroad tracks on Ivy Hill Road, Morganti worked for local contractors on building houses, including some of the High Ridge mansions – Altnacraig among them. Intent on becoming an American citizen, he studied English by attending night classes at the old Center School on Bailey Avenue.
In 1907, he decided to return to Italy to visit his parents for Christmas, only to be pressed into service by the Italian army and sent to Italian Somaliland in east Africa to help build a railroad. There, he contracted malaria and was sent back to Italy, spending 83 days in a hospital.
Two years after his impressment into the Italian Army, Morganti decided it was time to go “home.” With the help of three friends, two of them Ridgefielders, he snuck across the Italian border into France and eventually returned to America in February 1910. He became a U.S. citizen in 1917.
In 1916, he started his own contracting firm. A year later he already had six workers and over the subsequent decades, employed dozens of Ridgefielders.
Though he was reluctant to remain in the Italian Army,  Morganti had no qualms about joining the United States forces in World War I. He served in the Marne and Argonne campaigns in France with the 77th Infantry, fought in a half dozen major battles, and was wounded in the forehead.
After the war, he return to run his contracting company. “From its beginning through the 1940’s, Morganti grew from stonewall and small masonry projects into road building, bridge construction, high-end residential, shopping centers and commercial buildings,” Morganti Inc. says today on its website. A company motto is “Constructing solid foundations that last a lifetime.”
John Morganti and Sons also built and/or paved many of the roads in Ridgefield, and did some small-scale subdivisions. But large industrial and public buildings became the specialty of what became Morganti Inc.
The firm grew to the point where, in the 1970s, it was among the 400 largest construction companies in the nation. Among Morganti’s projects in town were East Ridge Middle School, Ridgebury School, Yankee Ridge shopping center on Main Street, Ridgefield Commerce Park on Danbury, and 901 Ethan Allen Highway (former Benrus Center, now the Pond’s Edge medical offices). Morganti built Wilton High School, much of Danbury Hospital, and in the last half of the 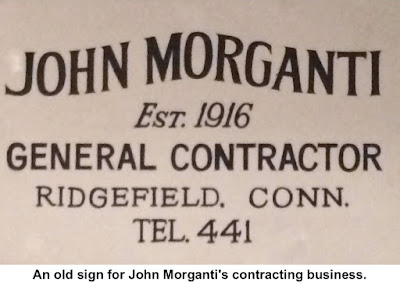 20th Century, many other schools, hospitals, and public buildings  throughout the eastern United States, and in the Middle East.

John Morganti remained active in his company until the early 1960s when his son, Paul J. Morganti, took over as president. Paul Morganti was also well known in town, serving in the 1950s and early 60s as a selectman, and then again in the 1990s in the same position. John’s other sons, John, Joseph, and Robert, were also executives in the company and well-known in the community.
In 1988, his company was sold to Consolidated Contractors Company of Athens, Greece, which retained the Morganti Inc. name but moved its offices to Danbury. Other Morganti offices are now in Florida, Massachusetts, New York, and Texas, Abu-Dhabi, Dubai, Egypt, Greece, Jordan, Qatar, and — appropriately enough — Italy.
John Morganti and his wife, the former Elizabeth Eramo, marked their 47th wedding anniversary in January 1965, three months before his death. He died on April 17, just 62 years and two days after he arrived in Ridgefield, an eager teenager from a far-away land.
In the early days of their marriage, John and Elizabeth lived in a three-story building on Bailey Avenue, just east of the Ridgefield Press. The Italian cooperative store occupied the first floor, along with Travostino’s bakery, while several families — including the Morgantis — lived upstairs.
“We had nice, large rooms in the Cooperative building and there was electricity,” Elizabeth Morganti told Aldo Biagiotti, author of “Impact: The Historical Account of the Italian Immigrants of Ridgefield, Connecticut.”
“There was a bathroom along the hallway. We paid $12 a month rent. Once a month on a Sunday morning, Sam Denton knocked at the door to collect the rent.”
On the night of April 22, 1922, John and Elizabeth were awakened to the cries of “Fire! Get out!” It was Antonio Travostino, who had arisen early to start up his ovens and who had discovered the building was on fire.
“My husband and I ... rushed out onto the sidewalk,” Elizabeth said. “The only thing I had on was my nightgown. We lost everything, as did all the others, and I do mean everything.”
The building burned for three days. “You know, the firemen did not have enough water to fight the fire,” she said. “Some of the roofs of houses way over on Governor Street burned as a result of the fire.”
However, she added, “if it were not for Travostino, we would have all burned to death. Although we and the other families lost everything, we were lucky. We got out of the fire with our lives.”

That was my grandfather, what an amazing man. Ridgefield would not what it is today wout his contributions❤️