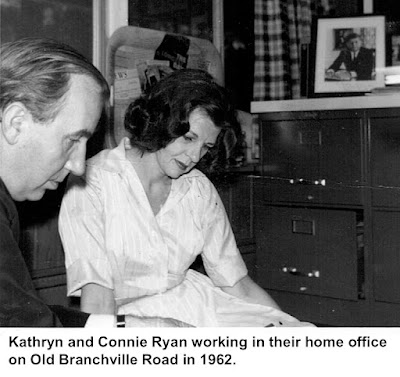 Kathryn Morgan Ryan:
A Woman of Words
Often working in the shadow of her famous husband, Kathryn Morgan Ryan was nonetheless an accomplished writer and researcher, who wrote four books and had a successful career in magazines.
The work through which she touched the most lives may well have been as a researcher and editor on her husband Cornelius Ryan’s World War II books, including “The Longest Day” and “A Bridge Too Far.”
Mrs. Ryan grew up in Iowa, the setting for her 1972 novel, “The Betty Tree,” which The New York Times described as “a novel about Midwestern attitudes and two adolescent children coping with affluent, busy parents.” (She admitted later that she wrote “The Betty Tree” after a dispute  with her husband in which he maintained she could not write a book on her own; she wanted to prove him wrong.)
In 1946, at the age of 19, she graduated Phi Beta Kappa from the University of Missouri’s School of Journalism and had an early career that included writing and editing for Conde Nast magazines.  She was an editor at House and Garden until 1953,  starting out making “the extraordinary sum of $30 a week, but we were encouraged to wear hats in the office — the mark, in those days, of a lady editor,” she said.
From 1955 to 1960,  she was an associate editor with House and Home magazine.
“I was the resident house author on Frank Lloyd Wright,” she told an interviewer in 1972. “While my husband was roaming the world in search of one story after another, I seemed to be knee-deep in bricks and mortar.”
She and Cornelius Ryan were married in 1950, they had a son and a daughter, and for a while Kathryn Ryan was supporting the family while he was researching “The Longest Day.”
“Life really became difficult for us,” she said. “I was working full-time because my job was the Ryans’ only source of income. Our three-room apartment in New York was almost uninhabitable. The children slept in what we laughingly called ‘the master bedroom.’ We bedded down in a room that wouldn’t have made a good-sized closet. Everywhere else, the apartment was piled high with research.”
At the same time, she was also raising two children and helping her husband. “I organized, cross-referenced, filed mountains of information and edited copy,” she said. “Sometimes we worked until 2 or 3 a.m.”
During the same period she also wrote two books, “House & Garden’s Book of Building” and, with comedian Alan King, “Anyone Who Owns His Own Home Deserves It.”
Kathryn Ryan is best known for writing “A Private Battle,” the story of her husband’s death 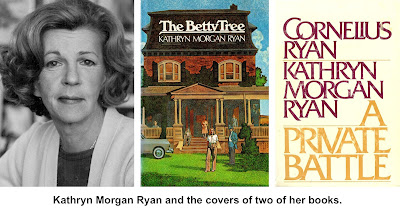 from cancer, which became a Book of the Month Club selection, was condensed by Reader’s Digest, and made into a television special. The book, which bears her husband’s name as co-author, is based on secret notes and tape recordings her husband kept as he was dying from prostate cancer. The notes were discovered after his death.

“Connie was so objective he couldn't resist interviewing an ashtray if one happened to be there, and I think he was both fascinated and repelled by cancer,” she told a Times interviewer. “I think his attitudes indicate he probably would have written a pretty definitive book about it.”
She decided to use his notes to write “A Private Battle,” which was published by Simon & Schuster.
It was a difficult, but cathartic experience, she told The Times. “Connie’s great desk sits just nine feet across the office from mine, and as I was writing it, I would be so immersed in the book I would really feel he was there.”
Over the years she received many honors. Some were unusual including, for her work on World War II, being made an honorary member of four paratroop units in the United States, England, and Poland.
A Ridgefielder for nearly 30 years, she was active in community organizations, including St. Stephen’s Church, the Ridgefield Garden Club, and the District Nurse Association. She lived for many years on Old Branchville Road in a Frank Lloyd Wright-inspired house of redwood, cypress and 84 windows overlooking eight acres. After her husband’s death, she moved to  Jackson Court in the village and some years later, to Florida where she died in 1993 at the age of 68.
Kathryn Ryan’s lifelong love of words came from her mother, who was an English teacher. “We played great games of parsing English sentences,” she recalled in a 1976 Ridgefield Press interview. “We learned grammar in a very entertaining fashion.”
She felt English often wasn’t well taught. “The problem today was the same thing my husband encountered and overcame in writing. History doesn’t have to be dull, and neither does English. It all goes back to imagination, to making something truly interesting to the pupil, to make him want to participate in what you are teaching.
“Once you get participation, you don’t have someone in the back of the room yawning.”