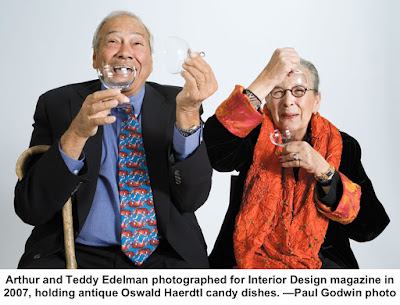 Arthur and Teddy Edelman:
Fine Hides and An Old Barn
When Arthur and Teddy Edelman came to Ridgefield a half century ago, they wanted a home that reflected their many and varied interests and talents that ranged from being leaders in the world  of luxury leathers and modern design, to their love of antiques and fine art, including the Old Masters.
So they bought a barn, took it apart, moved it five miles, and put it back together in a much glassier form. And there they lived the rest of their creative lives.
The Edelmans spent their long careers in the field of fine leathers and fashionable things crafted from them, working with people like Andy Warhol, who was their graphic designer for six years. The company they founded, Edelman Leather, supplies top designers today.
Born in the Bronx in 1925, Arthur Jay Edelman was a son of Russian immigrants. His father was a leather tanner, but that’s not what the young Arthur wanted to be: After serving in the U.S. Navy in World War II, he studied acting at Sarah Lawrence College, which had been a well-known women’s school.
“He went there when it was the first year they allowed men in,” said a co-worker. “He figured his odds were pretty good to meet a girl!”
He did just that, meeting Theodora “Teddy” Joffe, a Brooklyn native born in 1928. Four days 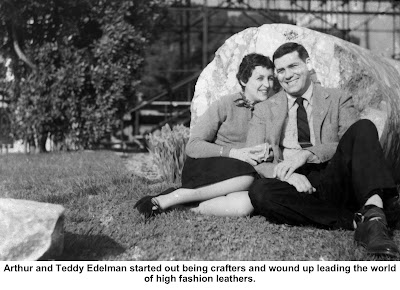 after graduating, they were married and, 66 years later, they became the longest married couple to have met at Sarah Lawrence.

After deciding acting was not his forte, Arthur joined Teddy in creating pieces of art from leathers. That didn’t produce enough money to survive on so the two went to work for Teddy’s family business, Fleming-Joffe, in New York, which was to become a leading supplier of high-fashion leathers and reptile skins. The two eventually took over the company’s management.
Andy Warhol joined Fleming-Joffe as a graphic designer,  producing many posters and advertising art pieces.  In 2016 Arthur Edelman told The Guardian how he first met and hired the artist in 1957.
“One day I was calling on one of our most important customers...in the Empire State Building,” 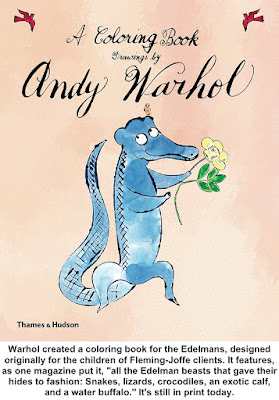 he said. “I was waiting in a darkened hallway when a very peculiar-looking man walked in and joined me. He had a white face, hair that was the brightest white — it just didn’t belong to a human being. His suit looked like it had been pressed under his bed overnight, his shoes were paint-splattered with all the colors of the rainbow. And he was holding a portfolio.

“Now, I’m a big man — six feet six inches — and I was scared.”
It turned out the specter was a struggling artist, there to show some proposed commercial work to Edelman’s customer. Edelman looked at the pictures, which involved snakeskin shoes. They were “most extraordinary,” he said.
The Edelmans had been looking for a promotional designer and Warhol was looking for a full-time job, and thus began a six-year relationship. “He came back to our offices a few blocks over and 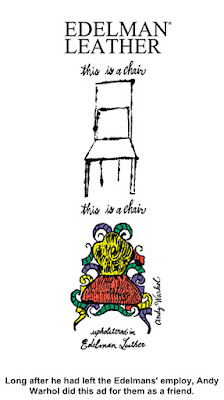 shocked our receptionist with his appearance,” Arthur said. “He and Teddy immediately took a huge liking to one another. Teddy was very motherly to him, which I think he liked.”

Warhol and the Edelmans remained friends until the artist’s death in 1987.
In 1971 the Edelmans sold Fleming-Joffe and exactly 10 years later launched Edelman Leather, which today provides luxury upholstery to architects and interior designers for high-end residential, office, hotel, aviation, and marine projects. “We are in the business of art,” the company says.  “Our art is leather.”
For his old friends in a new business, Warhol created what has become a well-known poster in art circles,  “This is a chair...”
In between their two careers running leather companies, the Edelmans decided to move to the “country,” buying around 30 acres of old farmland on Spring Valley Road. They wanted a custom-designed house with lots of views of the beautiful Mopus Valley, but they both loved antiques and wanted it to have a flavor of the old.
They decided to fashion a new house from an old barn and 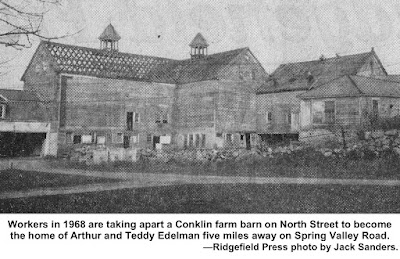 found the barn they liked on North Street, part of the old Stonecrest estate owned by the Conklin family. In November 1968, the huge, 6,800-square-foot structure was carefully dismantled and each piece 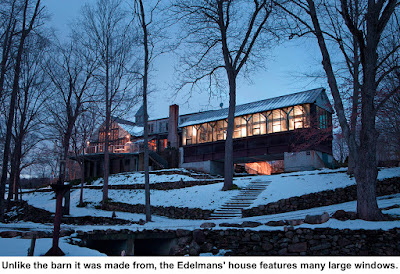 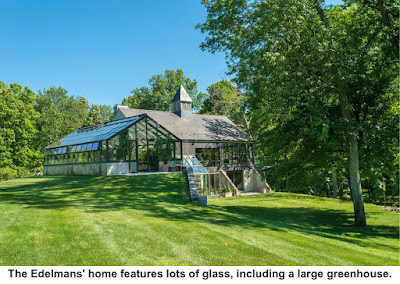 labeled before being moved to Spring Valley Road to create a new barn-like house.

The result is an 8,500 square-foot, seven bedroom home that became the center of their estate. The barnwood walls displayed their collection of paintings by the Old Masters and new talents — from Paul de Vos to, of course, Andy Warhol. They also had many fine antiques that included 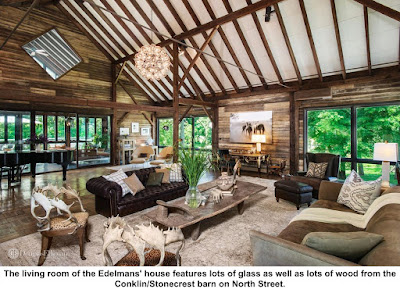 The estate’s name? Something one wouldn’t expect in Ridgefield but would expect from the Edelmans: “Alligator Farm.”
Teddy Edelman died in 2016 at the age of 88, Arthur two years later at 92.
Among their five children, at least two have become leaders in fields related to design.  John, their youngest son, is president and CEO of the contemporary furniture company, Design Within Reach, which has three dozen stores in the United States, Canada and Mexico. The oldest son, Sam, founded Sam Edelman high-fashion footwear.