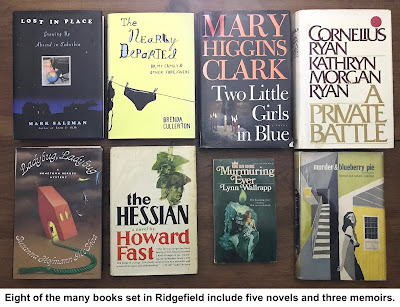 Fiction
A Dying Fall by Hildegarde Dolson, Lippincott, 1973: The victim supposedly slips on a step in the Aldrich Museum sculpture garden, falls and is mortally impaled upon a sharp work of art. Dolson lived in Lewisboro.

Cast Down; A New England Haunting by Tracy Petry, My Mutt Publications, 2015. Story of a family that moves to “Bridgefield” and  a ghost connected with the lost village of Dudleyville.

Divide by Two by Mildred Gilman (Wohlforth), Mercury, 1940: Novel of a child of “modern” divorced parents who tries with unusual results to arrange his life to his liking. Mrs. Wohlforth, one of the original “sob sister” newspaper reporters, lived on Rockwell Road for many years.

Don’t Raise the Bridge (Lower the River) by Max Wilk, MacMillan, 1960. A humorous novel about life in suburbia, airline pilots and a country inn (what is now Bernard’s). Wilk lived on Silver Spring Road when he wrote the book.

God’s Payday by Edgar C. Bross, G. W. Dillingham Company, 1898: A romantic drama, with scenes in Ridgefield — the main character pays a visit by train to escape the city and stays at the Keeler Tavern. Bross was editor of The Ridgefield Press from 1887 to 1899

Murmuring Ever by Lynn Wallrapp, Manor Books Gothic, 1975:  Tale of a family moving to a New England town, where they discover a terrifying legend that has haunted the town since the Revolutionary War. The teenage girl falls in love with the ghost of a soldier hanged 200 years earlier. The author grew up in Ridgefield  and wrote the book here.

My Brother Sam is Dead by Christopher Collier & James Lincoln Collier, Scholastic, 1974: A fictional account of teenagers in the Revolutionary War, set in Redding as well as Ridgefield; won Newbery award, Christopher was Connecticut state historian.

Murder and Blueberry Pie by Richard and Frances Lockridge, Lippincott, 1959: The scene of the title crime is the Keeler Tavern during Ridgefield’s 250th anniversary celebration. The Lockridges, who wrote the famous Mr. and Mrs. North series of mysteries and movies, lived in Lewisboro.

Please Omit Funeral by Hildegarde Dolson, Lippincott, 1975: Deals with the death of the author of a controversial book that has just been banned by the local (Ridgefield) school system. The novel was written during Ridgefield’s famous “book burning” era.

The Hessian by Howard Fast, Morrow, 1972: A novel about a fictional incident involving German soldiers during the Revolutionary War in Ridgefield and Redding. Fast lived on Florida Hill Road.

The Red Petticoat by Joan Palmer, Lothrop Lee & Shepard,1969. A fictional account of the “Red Petticoat” legend from the Battle of Ridgefield in 1777, aimed at teenagers. Palmer, a former AP journalist, lived in Lewisboro.

To Spite Her Face by Hildegarde Dolson, Lippincott, 1971: One of the two murders in this mystery takes places in the Ridgefield Thrift Shop.

Two Little Girls in Blue by Mary Higgins Clark, Simon and Schuster, 2006. A thriller set in Ridgefield about a mother’s search for her kidnapped child.

Non-fiction
A Private Battle by Cornelius Ryan and Kathryn Morgan Ryan, Simon & Schuster, 1979. Kathryn Morgan Ryan used her late husband’s secret accounts to tell the story of his four-year battle with cancer. Cornelius was the author of “The Longest Day” and two other acclaimed histories of World War II, and Kathryn was an editor and novelist who assisted him in his research. They lived on Old Branchville Road.

Lost in Place: Growing Up Absurd in Suburbia by Mark Salzman, Random House, 1995: Salzman, author of the book and movie, “Iron and Silk,” offers a light-hearted autobiographical look at his childhood and youth in Ridgefield.

Memories by Laura Curie Allee Shields, privately printed, 1940: An early activist for woman suffrage tells the story of her life, most of it lived on the corner of Main and Market Streets.

The Nearly Departed: Or, My Family and Other Foreigners by Brenda Cullerton, Little, Brown and Company, 2003: Humorous reminiscences about growing up in an unusual family  on lower St. Johns Road in the 1950s and 60s.