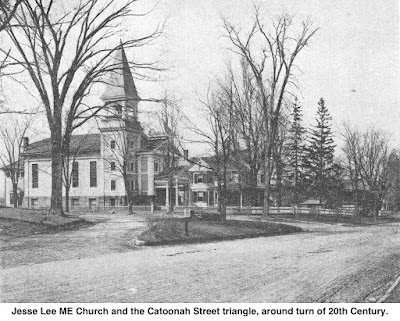 The Catoonah Street Triangle
As work continues on remodeling the front terrace of the Town Hall, we thought it would be fun to see what the view from there more than a century earlier looked like.
This picture, probably taken around 1900 and looking northwesterly, shows the intersection of Main Street (foreground) and Catoonah Street, running off to the left. The Town Hall would be at the  right, beyond the lens of the camera.
The remarkable feature of this picture is its clear depiction of a triangle that had existed at Main and Catoonah before the age of the automobile. Soon after this shot was taken, a watering trough was erected in the triangle and thereafter, the triangle began to disappear. At some point it was completely removed, along with the trough, apparently to deal with increasing traffic from the proliferating horseless carriages.
Often in the case of main highways, triangles don’t fit in with officialdom’s idea of an ideal intersection. Main Street once had at least two other triangles that have vanished: At the intersection of Gilbert Street, and at the intersection of Branchville Road (Route 102). It is quite likely that the junction of Main Street and Danbury Road was also once a triangle.
The only Main Street triangles left are at West Lane and at the very southern end, where the road splits into Wilton Roads East and West. And the state has repeatedly tried to do away with the triangle holding the Cass Gilbert Fountain at West Lane.
This picture is from the cover of a 1924 brochure for a celebration of the 100th anniversary of the first Jesse Lee Methodist Episcopal Church building in Ridgefield. That structure is not the one shown here, but a smaller building that stood at the intersection of North Salem Road and North Street — now the Lounsbury section of the Ridgefield Cemetery (No images of that first church exist.
The Methodist church shown here was built in 1841 and expanded somewhat over the years. In the mid-20th Century, it grew too small and the parking too limited so the congregation decided to build a new church a quarter mile to the south. This building was razed in 1964 and replaced by the brick stores-and-offices building there today.
The rectory, however, was not torn down. Visible just beyond the church, but half hidden by the trees, it became a three-story collection of shops and offices at 409 Main Street that is still used today (long called the Hackert and Monti building for post-Methodist owners).