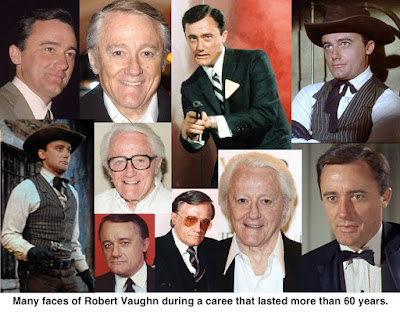 Robert Vaughn:
More Than A Solo
Not many Hollywood stars could be properly addressed as “Dr.” But Robert Vaughn, the actor and one-time political activist, was also a scholar whose Ph.D. thesis was so good, it became a book.
When “Only Victims: A Study of Show Business Blacklisting,”  was published in 1972, Kirkus Reviews called it “the most complete and intelligent treatment of the virulent practice of blacklisting now available.”
Nearly a half century later, it is still in print and regularly assigned to law students.
To most people, of course,  Robert Vaughn was Napoleon Solo of the TV series, “The Man from U.N.C.L.E.,” or the cowardly fop in “The Magnificent Seven” or the heavy drinking friend in “The Young Philadelphians.” Over his long career, he was in more than 100 movies, starred in several TV series, appeared as a guest star hundreds of times in countless television programs, and performed on the stage.
Born in New York in 1932, Robert Francis Vaughn was the son of a radio-actor father and a stage-actress mother. He majored in journalism at the University of Minnesota where, in 1951, he won an acting contest, and decided to move to Los Angeles to pursue that career.
He made his TV debut in 1955 in the series, “Medic,” and his first starring role on the big screen was in Roger Corman’s “Teenage Caveman” in 1958. But it was his Academy Award nomination for Best Supporting Actor for “The Young Philadephians” that really launched his career.
However, acting wasn’t his only interest, and he became active in the Democratic Party in California, eventually heading the Democratic State Central Committee’s speakers bureau.
Vaughn campaigned for John F. Kennedy (who was assassinated on Vaughn’s 31st birthday). He later became a friend of Robert Kennedy and his family, and seriously considered running for office himself until Bobby Kennedy was also killed.
“I lost heart for the battle,” he said later.
He did not lose interest in activism, however. A former Army infantry drill sergeant, Vaughn was the first major member of the film industry to speak out against the Vietnam War. He endured considerable criticism for his opinions, especially early on, but before he was finished, he had delivered more than 1,000 anti-war speeches.
He never really lost an interest in politics, either. Though already famous as an actor (he was Photoplay’s Actor of the Year in 1965), he assumed the role of journalist in covering the 1972 Democratic National Convention for radio KABC in Los Angeles. In the 1990s, Vaughn was doing stints in New York City as a radio talk show host where he showed a keen ability at debating politics.
Perhaps not coincidentally, Vaughn won an Emmy in 1977 for his portrayal of a shifty H.R. Haldeman-type character in “Washington: Behind Closed Doors,” a fictionalized mini-series about the Nixon administration.
He and his wife, Linda, a former actress who has been an activist against child abuse, moved to the historic Sunset Hall mansion on Old West Mountain Road in 1982. In the mid-1990s, they sold the place and moved to a new home on Salem View Drive in Ridgebury where he worked on his autobiography, “A Fortunate Life,”  published in 2008, while continuing to appear on TV and in films.
Vaughn would often be seen around town, doing his own shopping at Ridgefield Hardware or Stop & Shop, having a bite to eat at Nina’s, or attending his son’s Little League games. He drove several classic cars, including a silver Rolls Royce and a red Lincoln Continental.
He made his last film appearance in “Gold Star,” about a daughter’s leaving her life in the city to care for her dying father, portrayed by Vaughn. He delivered a mostly silent performance — he himself was dying of leukemia. Said a Hollywood Reporter reviewer: “It’s Vaughn, still looking dashing despite his obvious frailty, who gives the film its emotional core. In the deeply moving final scene, in which Carmine and Vicki sit quietly together on a beach, his plaintive eyes speak far more powerfully than any amount of dialogue.”
“Gold Star” was released Nov. 10, 2017, just one year after Vaughn had died at the age of 83.
Vaughn’s friendship with Bobby Kennedy led to a strange case of coincidence. On June 6, 1968, the day Robert Kennedy died, Vaughn appeared on the Dick Cavett Show to talk about Kennedy. Vaughn was clearly shaken as he discussed his friend with the popular TV interviewer.
Fourteen years later, Vaughn bought Sunset Hall.
Fifty years later, Cavett bought the same house.
Probably neither man had even heard of Ridgefield, much less Sunset Hall, when the 1968 interview took place.