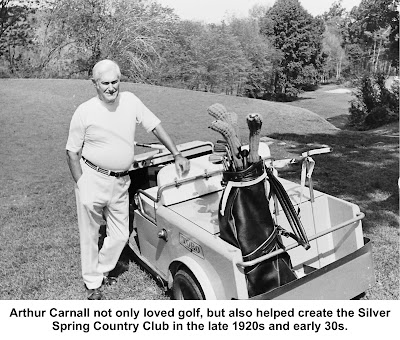 Arthur J. Carnall:
A Shropshire Lad
Arthur J. Carnall was a boy of nine, fresh off the boat from England, when he arrived in Ridgefield in 1904. He made the town his home for the next 67 years and helped change the face and function of the community in many ways.
A native of Shropshire, England, Arthur James Carnall was born in 1895. His family sailed to Boston and immediately came to Ridgefield; they chose the town on the recommendation of William Harrison Bradley of Ridgefield, who was then serving with the American consulate in England and lived across the road from the Carnalls.
He graduated from the old Center School on Bailey Avenue and attended a preparatory school in Virginia. (His sister, Marjorie Agnes Carnall, married John W. “Jack” Smith, the well-known Ridgefield orchid grower and estate superintendent, who was also born in England and who is also profiled in Who Was Who).
During World War I, Arthur Carnall served in the U.S. Navy.
In 1922, he joined the real estate and insurance business of Thaddeus Crane, located about where Dr. George Amatuzzi’s office is on Main Street. Crane (who will be profiled in a future “Who Was Who”) died in a spectacular car-vs.-train accident in 1928 and two years later, Carnall took over the business, renaming it A.J. Carnall Inc. It became Ridgefield’s largest insurance business and, in 1965, moved into the second floor of a new office building at the corner of Main and Catoonah Streets — what became popularly known as “the Carnall Building.”
Throughout his life here, Carnall was involved in efforts to improve the community.  “Mr. Carnall’s love of Ridgefield and devotion to its welfare marked his public life,” The Ridgefield Press said when he died.
One of his first big projects was amassing 270 acres in the late 1920s to create the Silver Spring Country Club, which opened in 1932. Throughout his life he was an active member of the club and at his death in 1972, was its treasurer and a governor. He was, needless to say, an ardent golfer, but was also a good one, winning a number of tournaments in the region over the years.
In the late 1930s, he almost single-handedly conducted a bond-selling drive that, in 1940, created Ridgefield’s first movie theater, the Ridgefield Playhouse, on the site of today’s Prospector Theater. Before then, Ridgefielders had to travel to one of three theaters in Danbury to see a movie. The Playhouse was also used for various stage productions.
A few years later his enthusiasm and salesmanship resulted in the town’s buying the Lounsbury block, now Veterans Park, along with its mansion, now the Community Center. He also helped organize the Community Center operations.
He also dabbled in development – the “car” of Marcardon Avenue is he, partners with Francis D. Martin and Joseph H. Donnelly (Martin, then also a boy, was one of the first people Carnell met when he came to Ridgefield in 1904, and they became lifelong friends.
For 15 years starting in 1941, Carnall was the town tax collector. He was a founder of the Lions Club and of the Danbury and Ridgefield Boards of Realtors, belonged to the Ridgefield Grange and Danbury Elks, was on the Wadsworth R. Lewis Fund advisory committee, and volunteered on countless boards and committees — including serving on the Ration Board during World War II.
He and and Agnes Kelly were married in 1930 and lived on Gilbert Street for their entire   life together. Both took pride in their beautiful gardens. He was 76 years old when he died at his winter home in Florida in 1972. She died in 1996 at the age of 92 in Florida where she had moved after her husband’s death.
In 1999, Ridgefield Bank, now Fairfield County Bank, bought A.J. Carnall Inc., and 10 years later renamed it Fairfield County Bank Insurance Services. It still operates out of the “Carnall Building.” Carnall, incidentally, had held several offices in the old Ridgefield Savings Bank, predecessor of Fairfield County Bank, starting as an incorporator in 1941 and ending as vice president at the time of his death.