The Tulipani Brothers:
A Five Star Family
One of the happiest — perhaps one of the most amazing — stories of World War II was of the five Tulipani brothers, all of whom went off to serve in the armed forces and all of whom returned safe and sound to live long lives in their native Ridgefield.
Aldo, Joseph, Albert, Alfred, and John Tulipani, children of Vincenzo and Evelina Branchini 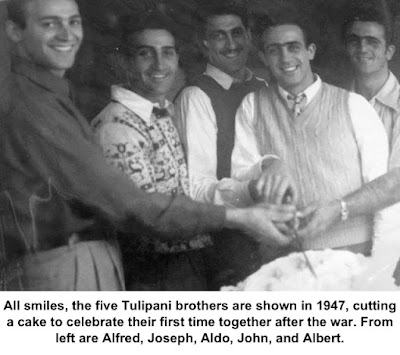 Tulipani, were all native sons, and grew up on the family’s 65-acre farm on Nod Hill Road.

Aldo Anthony Tulipani (1916-2003), the oldest of the boys,  graduated from Ridgefield High School in 1934. He joined the post office in 1940 as a mail messenger,  transferring the mailbags between the Ridgefield post office and the railroad mail cars passing through the Branchville Station.
In World War II Aldo served in the U.S. Army, which sent him to the Philippines with an anti-aircraft unit, in preparation for the invasion of Japan. Soon after he arrived, the atomic bombs were dropped and his duty changed to seeking out Japanese troops still holed up in Philippine caves. As the war was ending, he was transferred to a special entertainment unit, performing on the accordion in a band at various bases and outposts in the Philippines.
Back home, he was hired as a letter carrier for the post office, and soon became well known and loved by the people on his 39-mile route through the southern part of town. For many years he would provide treats for children on his route. “Thursday was candy day,” he recalled. “But before the kids could get some, they had to say the Pledge of Allegiance.  I remember one little girl who 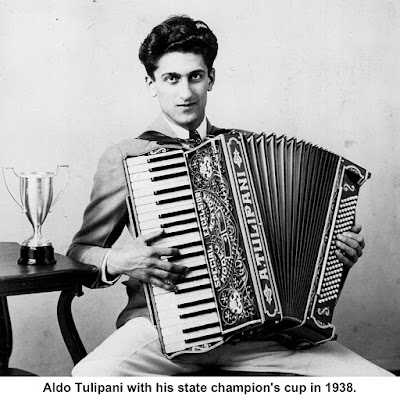 could barely even talk, but her brothers and sisters made her practice the pledge all week. When Thursday came, though, she said it all the way through. Oh, gosh, she was only about three years old — she could barely pronounce words like ‘indivisible.’”

He retired from the post office in 1976.
Aldo was an accomplished accordionist, who made his radio debut in 1933 on a New York City station and later played before a crowd of thousands at the New York World’s Fair. He won the Connecticut state accordion championship in 1938, the same year he began teaching the instrument — he continued providing instruction for nearly a half century. Many Ridgefielders recall his car’s license plate, SQZBX — short for “squeezebox.”
A founder of the local VFW post, he was the Memorial Day grand marshal in 1990. A video interview with Aldo about his war experiences is in the American Folklife Center of the Library of Congress, and may be viewed online.
Joseph Anthony Tulipani (1918-2004) was a 1937 graduate of Ridgefield High School and worked on local estates before becoming one of the first Ridgefielders to fight in World War II. A member of an Army radar unit, he served in Australia,  and in the jungles of New Guinea and the Philippines. He survived Japanese bombing attacks in Australia and in the jungles, and was with General Douglas MacArthur’s forces in the liberation of the Philippines.
Joseph was well known to the local Philippine guerrillas with whom he worked. One day a 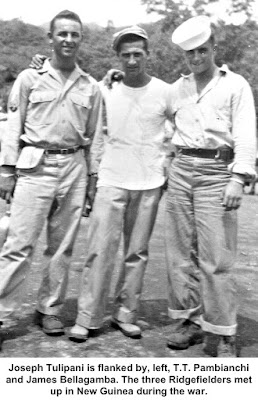 Filipino, with pistol drawn, came upon Joseph’s brother, Aldo, also an Army man, who had recently arrived in the area. The guerrilla might have shot the stranger except that, Joseph said later, “they recognized him as me,” and let him go.

From the day he entered the Army — April 1, 1941 — until he was discharged on Aug. 25, 1945, Joseph kept detailed diaries of what he saw. “Whatever made me do it, I don’t know,” he told an interviewer in 1974. “I had this funny sensation when I got on the bus in Danbury. I sat down and until I got my pencil and pad out, this sensation wouldn’t stop. Somebody was telling me to write.”
And write he did. When his service ended and he was being discharged, he was faced with a dilemma. He had a suitcase full of diaries that were illegal to bring home. “You weren’t allowed to take anything in writing,” he said. “No names and addresses, nothing concerning the unit.” He could have tried to smuggle them out, risking arrest and a court martial, but he decided to “play honest.” He told the inspecting officer what was in the case. “He said, ‘You know what you’ve got to do with those. You’ve got to throw them in the fire,’ ” Joseph  pleaded with the inspector, who finally agreed to turn over the suitcase to the base censors. “I never thought I’d see it again,” Joseph said. But six months after he arrived home, the diary-laden suitcase showed up on his door.
He planned to produce a book of his memoirs, but never completed the project. (The diaries were nearly destroyed in a fire that heavily damaged his home in 2000, but were rescued by firefighters. The writer has not been able to find out where the diaries are now.)
After the war Joseph became the superintendent of Jack Ward’s Ward Acres estate for many years. He also worked semi-professionally as a photographer. When the original St. Mary’s School was operating in the 1960s, he took many of the class and team pictures there.
Albert Nazzareno Joseph Tulipani (1920-1994), also an RHS graduate, went on to attend a music school in New York City, majoring in string instruments. During World War II he served in the U.S. Navy aboard the destroyer U.S.S. Wilson, escorting convoys of cargo ships to Russia on the 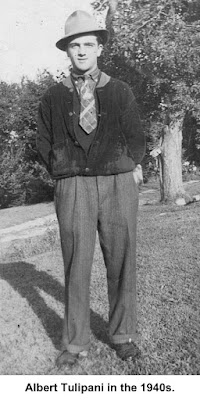 harsh and dangerous “Murmansk run.”  The Wilson also patrolled the Atlantic for German submarines — the ship was credited with sinking two of them — and escorted ships carrying troops to England and, later, the invasion of France.

The Wilson then moved to the Pacific Theatre, participating in such battles as Wake Island and Guadalcanal. Albert also served aboard three aircraft carriers during his three years and 10 months in the Navy. He received the Presidential Unit Citation for service while on duty in the Atlantic and decorations and citations for service in the Asiatic Pacific Campaign, China-Burma Theatre, North Africa Campaign, Middle East Theatre, Solomon Islands, and Casablanca.
Back home, he was a guitar teacher who also played professionally in the region until the early 1960s. He was also a familiar figure at Brunetti’s Market, where he worked for many years, and later at the Grand Union.
Alfred Anthony Tulipani (1921-2013), the last of the five brothers to die, joined the Army in 1942 and spent most of his service in Canada. He was stationed with an Army anti-aircraft unit, guarding Great Lakes locks during the war.
Alfred maintained that his wife, Mary, was “the first war bride in Ridgefield.” The two met 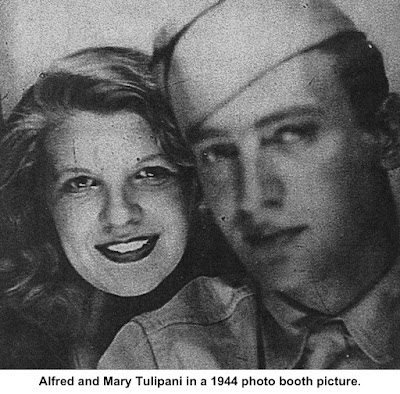 in 1943 at a Woolworth’s in Sault Ste. Marie, Ontario. They were married a year later.

While he was still in the service, his new bride had to get a special “border crossing card” to be able to travel between Ontario and the U.S. While she was in Ridgefield at one point in 1944, she needed to go to Hartford to pick up the card. The only way to get there was on a troop train that stopped in Norwalk.
Brother-in-law Aldo Tulipani drove her to Norwalk and the two boarded the train for Hartford. The 18-year-old newlywed was the only woman on the train, a fact that did not go unnoticed by all the soldiers on board. Several asked the conductor if he would stop the train and allow Mrs. Tulipani to walk down the aisles of the cars. The conductor did, Mary agreed, and she was greeted with countless cheers and much applause.”
After the war, Alfred became a superintendent of local estates, including Casagmo on Main Street, as well as a landscaper. Late in life, he frequently contributed reminiscences about the “old days” in town to The Ridgefield Press. He and Mary had been married 69 years when he died.
John Vincent Tulipani (1922-2002), the youngest of the brothers, graduated from RHS in 1941 and entered the Navy two years later, serving with the 100th SeaBee Battalion. He was stationed in Hawaii, in the Marshall Islands where he helped build a landing field out of coral, and in the Philippines, where he built hospital barracks and other facilities.
The Navy also took advantage of his skill at his lifelong love: baseball. As a seven-year-old 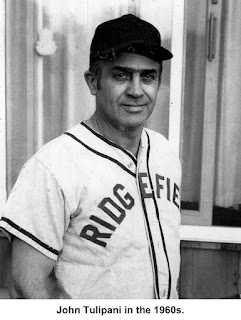 boy, John began playing on the family farm — long before there was a Little League, he and his brothers played in the fields, sometimes running into trouble with their father when they smacked fly balls into his vineyard.  He started playing organized ball at RHS in 1939; Coach Kip Holleran, who was also the school’s principal, called him the best player he ever coached.

In the service on Oahu, John played on the 1944 All-Navy All Star Team that included many former professional players.
After the war he played on both baseball and softball teams in town and the area. He later coached Ridgefield teams, including Babe Ruth League.
Before entering the service, John worked for Domenic Gaeta, a Ridgefield plumbing contractor. After the war, he continued working with Gaeta, but in 1962, struck out on his own, establishing John Tulipani and Sons Plumbing and Heating.  Over the years he was noted for fashioning various tools and devices to assist in the plumbing and heating trade. “He liked to invent things,” said his daughter, Beth McKnight. “He loved to putter.” John retired in 1991.
All five brothers were musicians. “Down on the farm was very lonely, so my father 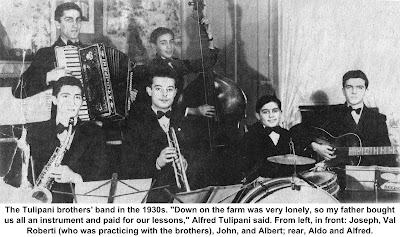 bought us all an instrument and paid for our lessons,” Alfred said in a 2006 reminiscence. Before the war the brothers played together as the Tulipani Orchestra and in the post-war era, performed at countless square dances as the Sagebush Serenaders.  Aldo was on the accordion, Albert  guitar, Joseph sax, John drums or bass, and Alfred  bass.

All five had been active members of the Veterans of Foreign Wars, which, in 1982, honored them, observing that they were the only five brothers who were all World War II veterans and who were still active in the national VFW. 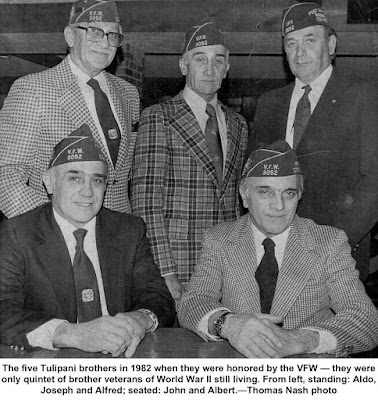