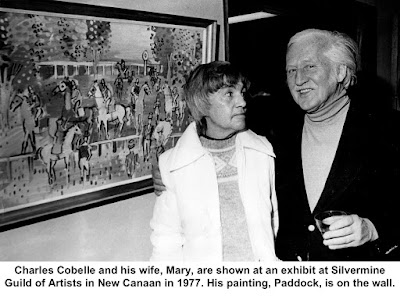 Charles Cobelle:
Painting Joy and Happiness
Thousands of people enjoy the art of Charles Cobelle every day without going to a gallery or museum — his colorful murals of French scenes enliven the walls in buildings across the country, and even in ships that sail the seas.
And the scenes are always bright. “He didn’t want a rainy day — he only wanted happy days,” said a Pennsylvania art gallery owner.  “You’ll never see a rainy, dark day in any of his pieces.”
Born Charles Edelman in Germany in 1902, Cobelle was trained as an architect at the University of Munich. He changed his name to simply “Cobelle” after moving to Paris where he 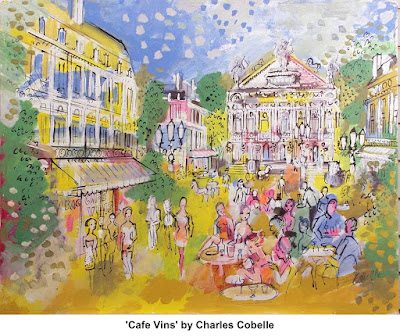 began studying at the Ecole des Beaux-Arts. More important for his art, however, were the many hours he spent working privately with Marc Chagall and Raoul Dufy.

Even after moving to the United states in the late 1920s, his work was filled with Parisian street scenes, impressions of the Riviera, French race tracks, and casinos — but almost always, showing people having fun.
One writer described Cobelle’s work this way: “The subjects in Cobelle’s paintings were not 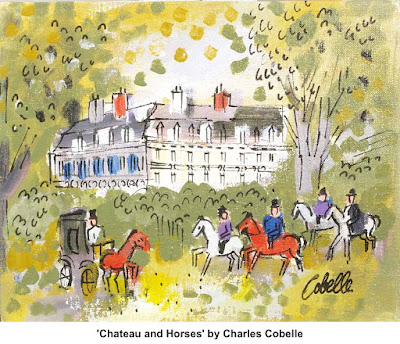 of actual locations or events, but they nevertheless convey the excitement of the places that they depict. This imagery, combined with a vibrant palette of expressive colors, creates a world full of verve and wit that effortlessly transcends reality.

“His paintings are characterized by thin, descriptive line-work over broad patches of bold color. First, Cobelle would map out a scene in blocks of bold, expressive color. Then, he would 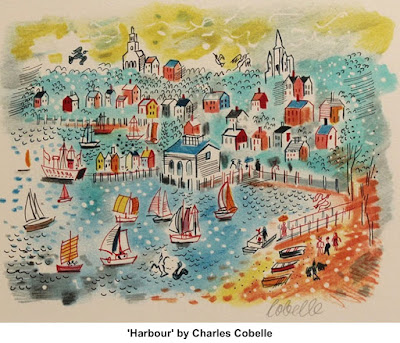 “Many of his paintings were painted on canvas with mixed media — oils, acrylics, tempera, conte crayon, ink, whatever was at hand.”
In the United States, Cobelle became a prolific and popular artist and muralist. His murals could be found throughout the country at such places as the Henry Ford Museum, the offices of 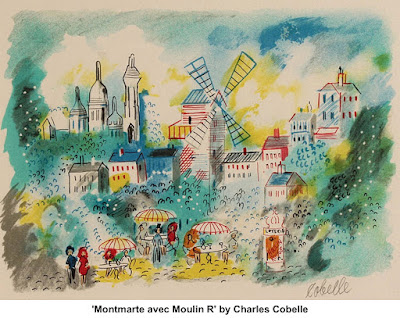 Neiman Marcus, Gimbels, and Bloomingdale’s, hotels like The Desert Inn in Las Vegas and Mark Hopkins in San Francisco, and the ships of Holland American Lines.

He also did murals for the 1939 World’s Fair.
In Ridgefield, his murals can be found at Bernard’s Inn on West Lane and at Boehringer 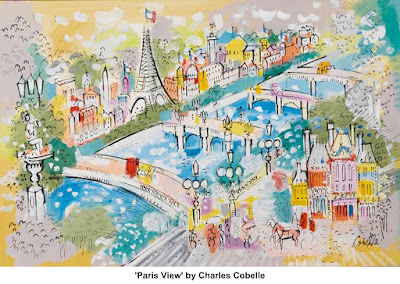 Cobelle did commercial art for the likes of Milton Bradley, Helena Rubenstein, and American Artists Group Greeting Cards, and his paintings appeared on the covers of many 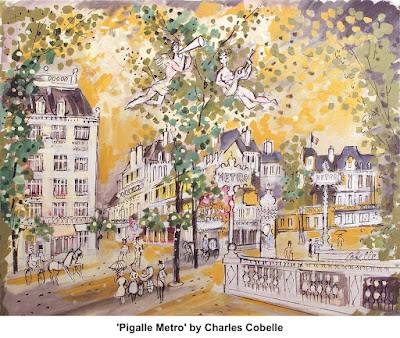 magazines, including Town and Country. He also did pottery designs for such companies as Midwinter Stylecraft, Universal Potteries and Homer Laughlin China.

Cobelle lived in Westport  before moving to Ridgefield where he lived for 32 years, first on 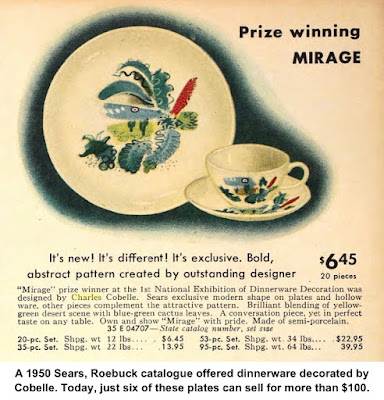 In 1965, he lost most of his early work as well as records and correspondence when a fire destroyed his studio on Barlow Mountain Road.
Cobelle died in 1994 at the age of 92 and is buried in St. Mary Cemetery.
His love of color and bright city scenes live today in the paintings of his daughter, Christina “Tina” Cobelle-Sturges, who grew up in Ridgefield and whose oils and watercolors,  well-known on the regional art scene, were influenced by her father.
“As Cobelle’s child, I would see him constantly creating and painting everything that would bring joy and happiness to the world around him,” she once said. “The reason for Cobelle’s popular success is the joie de vivre that characterizes all of his work.”