Thomas Fitch IV:
Yankee Doodle’s Dad
Connecticut’s venerable Fitch family loved the name Thomas. Generations of men were named Thomas Fitch I, II, III, IV and well beyond. But it was Thomas the Fourth who had a Ridgefield connection and it was his son, Thomas the Fifth, who could be one of the most unknown, 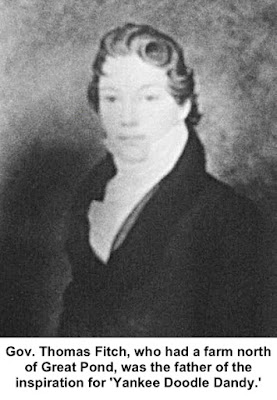 yet at the same time hugely famous people in North America.

Thomas Fitch IV was born around 1700 in Norwalk, son of — of course — Thomas Fitch III, one of the first settlers of that town and a man of some wealth. Thomas IV was the first Norwalk man to graduate from a college (Yale, 1721), where he studied law and also earned a master’s degree. He was a representative from Norwalk in the colonial assembly and was later a chief justice of the Connecticut Supreme Court.
He served as governor of the colony from from 1754 to 1766, a long stretch even by today’s standards. His tenure included leading Connecticut during the difficult French and Indian War, which resulted in the colony’s amassing a huge debt that led to a financial recession. However, he may be more famous as the father of  Thomas Fitch V,  reputed to have been the inspiration for  “Yankee Doodle Dandy.”
Thomas V’s gravestone as well as Musicologist Oscar George Theodore Sonneck, who was once head of the music division of the Library of Congress, maintain that Captain Fitch  assembled a company of recruits at the Fitch homestead in Norwalk in 1755  at the beginning of the French and Indian War. The recruits lacked uniforms and Fitch’s sister Elizabeth wanted these soldiers’ appearance to  have at least some degree of uniformity. So she presented each man with a chicken feather for his hat. Fitch then led the rather tatterdemalion group of new volunteers  to upper New York to fight.
According to the monument at his gravesite in Norwalk, “Upon entering West Albany with these plumes and their homespun and forlorn clothing, their motley appearance caused Dr. Richard Shuckburg, a British surgeon, being both a poet and musician, thru derision and mockery to write the verses dubbing them ‘Yankee Doodles and Macaronies’ ”:
Yankee Doodle went to town
Riding on a pony;
He stuck a feather in his hat,
And called it macaroni.
A macaroni was an 18th Century term for a fop or extravagant dresser, and the British doctor was likening the group from Connecticut to a pack of country-bumpkin dandies.
However, the song that had been written in sarcasm soon became widely popular among the colonials, especially after their successful campaigns.
During the Revolution two decades later, both the British and Americans used their own versions of the tune as rallying cries.  Ferenz Fedor in his 1976 book, “The Birth of Yankee Doodle,” maintains it “became one of the most famous marching songs ever written.” It’s the official state anthem of Connecticut.
So what’s all this have to do with Ridgefield? The Doodle’s dad, Thomas IV, had farmland in what is now Ridgefield.
Sometime during the 1700’s, Thomas Fitch IV acquired at least 132 acres in a part of Redding that is now Ridgefield. “Fitch’s Farm” or “Governor Fitch’s Farm,” as it came to be known, was located in the northwestern part of Redding and what’s now the northeastern part of Ridgefield. The  farm extended along what is now northern Route 7 north of Great Pond, and probably included  the vicinity of modern-day Laurel Lane and the Laurel Ridge, Ridgefield Crossings and Regency senior citizen communities.  That land was  part of Redding until 1786 when it was ceded to Ridgefield.
When Governor Fitch died in 1774, his farm passed on to his heirs. One of these was another son, Jonathan Fitch (1723-93), a sheriff in New Haven County, who apparently got into some financial difficulties. The Ridgefield land records report that in 1787, Samuel Squire of Fairfield sued “Jonathan Fitch of New Haven, sheriff of said New Haven County,” to recover a 126-pound debt, and obtained as settlement from the County Court 132 acres of land – Fitch’s Farm.
Squire subsequently sold the land to Thomas Sherwood, noting that it “is commonly known by the name of Governor Fitch’s Farm, lying in the northwest corner of the town of Redding, lately sett off to the township of Ridgefield.”
A year earlier (1786), Sherwood and others had petitioned the state legislature that a piece of Redding be annexed to Ridgefield because most of its inhabitants found it “inconvenient ... to attend public business in said Reading.”
William Blodgett’s map (published in 1792, but not up-to-date) shows a triangular wedge of Redding extending nearly a mile into Ridgefield, north of Great Pond. Other boundaries on the map were not very accurate, but the document gives a clue as to the location of both the farm and the annexed territory.
The terms “Governor Fitch’s Farm” and “Fitch’s Farm” appeared fairly frequently in the land records in the 1780’s and 1790’s, but thereafter disappeared.
Although the farm had been called Fitch’s, the governor probably never lived there. He may have maintained the land for growing crops, sending up crews from his Norwalk home to work the fields.
Fitch IV died July 18, 1774. He is buried in the East Norwalk Historical Cemetery. The Fitch house in Norwalk, which had been partially destroyed during the “burning of Norwalk” raid carried 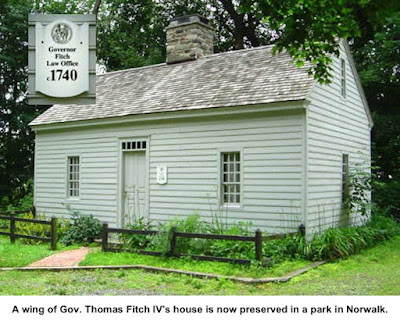 out by William Tryon and British troops in July 1779, had been home to Fitch family descendants until 1945. In 1956, a portion of the Fitch house was relocated to make way for the construction of the Connecticut Turnpike and stands today as part of the Mill Hill Historic Park next to the Green in Norwalk.

Thomas V finished his service in the French and Indian War with the rank of senior colonel, in command of 16 regiments. Back home in Norwalk, he became a prominent citizen during and after the Revolution. He served as a town councilman and was  in the first delegation from Norwalk to the Connecticut House of Representatives in 1776. He helped with the reconstruction efforts after the burning of Norwalk.  He died in 1795 and was also buried in the East Norwalk Historical Cemetery.
As for that name, Thomas, it just kept on going among the Fitch family descendants, including lawyer and congressman Thomas Fitch  (1838-1923), “the Silver-Tongued Orator of the Pacific Coast.”  Attorney Fitch, a former newspaper editor who helped teach the young Mark Twain how to write well, successfully defended Virgil, Morgan, and Wyatt Earp plus Doc Holliday when they were charged with murdering Billy Clanton and the McLaury brothers in the Gunfight at the O.K. Corral in 1881.


And he had a son named Thomas, too.

Aldo was lucky with that squeezebox. --- A WW II story I'll never forget is Umberto Eco's, The Gorge -- http://www.newyorker.com/magazine/2005/03/07/the-gorge. --- (But what I don't understand is The New Yorker's editors not dropping those first two paragraphs!)