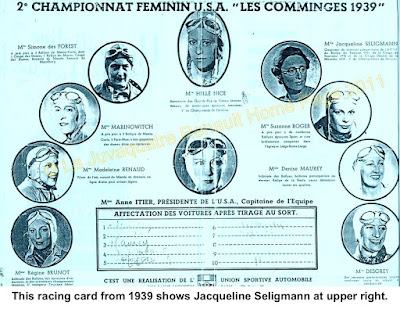 The Unhappy Heiress
Jacqueline Seligmann was one of the more unusual people to have lived in Ridgefield. The daughter of a famous Parisian art dealer, she became both an accomplished photographer and a racecar driver in 1930s France, and was known throughout our area in the early 1960s as a skilled bridge player. But her later life in Ridgefield included seemingly endless battles with her family and the IRS, and she died alone with a house full of cats and worried about “detectives.”
Jacqueline Reine Louise Seligmann was born in 1906, a daughter of Jacques and Ella Grunebaum Seligmann. Her father was an internationally famous art dealer, with galleries on the Place Vendôme in Paris and on Fifth Avenue in New York City. His clients included Baron Edmond de Rothschild of France, the Stroganoff family of Russia, and Sir Philip Sassoon of England. In America, he had advised J.P. Morgan and William Randolph Hearst in their art purchases, and had helped Benjamin Altman build a collection that was later given to the Metropolitan Museum of Art. Jacques Seligmann died in 1923, when Jacqueline was still a teenager. 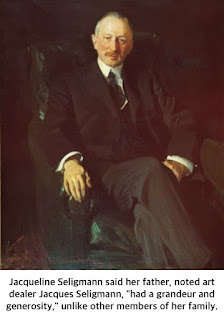 Her old brother, Germain Seligman (he spelled his name with only one N) was a celebrated hero in World War I, earning the French Croix de Guerre with six citations. He had helped his father in running the business, and continued managing the business after his father’s death.
During the 1930s, Jacqueline Seligmann earned a wide reputation as both a professional photographer and as a professional racecar driver. Even today, her photographs appear in art auctions.
During her years on the French racing circuit, she met Edmee Chapelle, who was a French writer and amateur race driver. The two women became partners until Emdee’s death in Ridgefield in 1954.
During the early part of World War II, Seligmann and Chapelle volunteered as drivers of trucks that evacuated children from the path of the invading German army.
According to a 1943 interview in The New York Times, the two “left Paris two days before the German invasion, driving 300 miles south to Mont-Dore with other women drivers in their unit.
The trucks were crowded with refugees and records of the Ministry of Armament, Mrs. Chapelle related. It had been their plan, she added, to remain in Mont-Dore for the duration, but they had to alter their plans a few days later…Accompanied by a 13-year-old wire-haired terrier named Pouff, and Briquet, an 11-year-old toy Schnauzer, they immediately set out for the Spanish border and finally made Lisbon and a boat to America. The two dogs are still with them and represent their only ties with home.”

However, they also brought with them about 6,000 negatives of pictures taken in various European and North African countries, which were turned over to the U.S Naval Intelligence to help in the war effort.  Seligmann had shot many of the photos.
By 1943, they had settled in New York City where the Seligmann family had many ties through their gallery in Manhattan. There they established the Seligmann-Chapelle Photographic Studio. They also served with a city wartime agency designed to help reunite families — especially children — separated after a bombing attack. 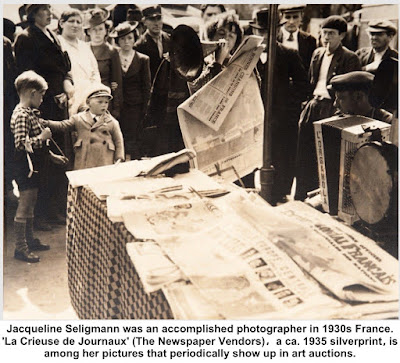 In the 1940s, Seligmann acquired a modest old house on Old West Mountain Road as a country retreat and, with Chapelle, brought along their two dogs that had accompanied them on their escape from France. Over the years they began to acquire many cats “of which they were both very fond,” said Karl S. Nash, publisher of the Ridgefield Press, who often played bridge with Seligmann.
Seligmann’s widely publicized and often bizarre legal battles involving her family and her inheritance began in 1953 when, at the urging of other members of the Seligmann family, a court ordered her to account for the estate of her mother, Ella, who had died in 1940 and for which she was administrator. Missing was a painting by Jean-Auguste-Dominique Ingres, a 19th Century French artist, said to be worth $50,000 ($450,000 in today’s dollars).  She refused to turn over the picture and the court eventually relieved her of her administrator’s position, turning over supervision of the estate  to two banks, including City Trust Company in Bridgeport. In 1963, City Trust sued Seligmann for return of the Ingres painting plus $50,000 damages. A court even had a deputy sheriff search her home, but the painting was never found.
Relations with her family worsened. In 1961, Seligmann wrote President John F. Kennedy, complaining about the “irregularities” in the Internal Revenue Service, the Surrogate Court of New York, and the sheriff’s office in New York, charging that these agencies were mistreating her at the instigation of her relatives. She supplied corroborating documents. White House Press Secretary Pierre Salinger, no less, responded and said her documentation was being turned over to “appropriate government officials.”
Two years later — and shortly before he was assassinated — she wrote Kennedy a long,
letter in which she rattled off charges against government agencies, but again blamed it all on her family, especially her brothers Germain and Francois Gerard. The family had duped the agencies, she said, ticking off dozens of examples of how she was placed under attack by the government, banks, individuals, and by hired agents of the family, whom she called “detectives.”

Speaking of herself, she asked the President: “How, in the 20th Century, can any human being be kept prisoner, for years, in her own home, be watched day and night, live under unshingled and leaky roofs which the insurance has not repaired for two years, unable even to have the bare necessary painting done, sadistically being denied any of the style and life she has been accustomed to.” She added that, to prevent her records from being stolen, she constantly carted around a “45-pound bag” full of  documents  that exposed “this incredible conspiracy and embezzlement” by her family.
In another letter to the president, Seligmann recalled a story that her mother used to tell about her father. “When a poor man steals 100 dollars, he is thrown into prison, but when a rich man steals 100 million dollars, people lift their hats and say ‘How do you do, Mr. Seligmann.’”
“My father may have been unethical, I cannot judge,” Seligmann said. “But he had a grandeur and generosity.” His sons, in-laws and cousins, she said, “are only petty thieves, embezzlers, sadists, and slanderers.” In 1940, she added, Germain had even spread a rumor   that Emdee Chapelle was “a spy.”
By 1967, Seligmann was fighting the Internal Revenue Service, which had notified her that she owed some $100,000 in back taxes ($730,000 today) for the years 1958 through 1964. Acting as her own attorney, Seligmann maintained in a court filing that “plaintiff owes no taxes whatsoever because of her losses which would have to be computed in the billions or more.”
The New York Times reported that she attributed her losses to the opening by her family of “a plethora of financial accounts” all over the world and creation by them of “endless real and fictitious trusts, guardianships, foundations, corporations, and partnerships in 50 states and abroad.” As a result, she alleged, she had 17 IRS numbered accounts in her name, including one listing her as a French citizen and another as a Hungarian (she had become U.S. citizen in the 1940s).
The case dragged on into 1969, an especially sad year for Seligmann. That September, her house on Old West Mountain Road caught fire due to a defective furnace, and was destroyed. Seligmann and 27 cats escaped from the burning house before firemen arrived. 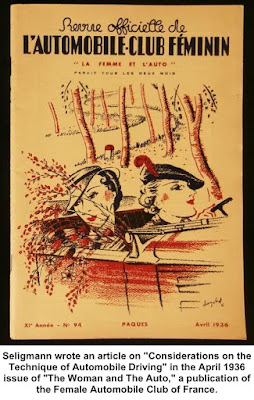 “The cats were all over the place,” reported Fire Captain Richard McGlynn. Other cats had died in the blaze, he added.
Also destroyed in the fire were 14,000 rare books, antiques, paintings, Oriental wood carvings, sculptures, and a valuable daguerreotype collection as well as Seligmann’s negatives and cameras.
One month after the fire, she was due in U.S. Tax Court in New York City. In advance, she placed a small advertisement in The New York Times, saying “REQUEST LARGEST POSSIBLE ATTENDANCE AT MY TRIAL Monday, October 6 … for non-payment income taxes.  I WILL REPRESENT MYSELF. No lawyer retained by me. I can be recognized by 4 missing front teeth and dislocated left shoulder. I am staying temporarily at Stonehenge Inn, Ridgefield, Conn. MISS JACQUELINE SELIGMANN of Ridgefield, Conn, of the art dealers family.”
Four people — three supporters and one New York Post reporter — showed up that October Monday.
In court, Seligmann blamed her house fire on her family. She had called a repair service for her defective furnace, but none had shown up. “The detectives hired by my family prevented the repairman from coming,” Seligmann told the court. “They are always doing things like that. Look at my little Triumph. After 18,000 miles, they started pouring acid on the chassis. At 20,000 miles, it broke in two.”
She repeated her contention that she owed the government nothing. “My money has all been embezzled,” she said. “That’s why they’ve (her family) hired the detectives, because there’s so much money involved. There have been endless forgeries. They even used a computer to forge my name. When this case is over, it’ll turn into something like billions.”
She charged that “my family has even hired a girl to impersonate me. Now she can go places where I’m not supposed to go, and I can’t go anywhere at all.”
Outside the courtroom after the session, Seligmann asked The Post reporter where she could get a new muffler to replace the one that had fallen off her car.
“They loosened it,” she said.
“The detectives?” asked the reporter.
“Yes,” she said.
Seligmann and the IRS eventually agreed to an undisclosed settlement.
She continued to live in Ridgefield with her cats, eventually acquiring a home on Barrack Hill Road. She was a familiar sight in town, driving a classic Buick Skylark convertible that often had cases of cat food in the back seat. She continued to maintain that “detectives” hired by her family were following her, even spying on her from cameras they had secretly mounted on utility poles outside her house.
She died in 1979 at the age of 73 and is buried in Fairlawn Cemetery, alongside Emdee Chapelle.
“How sad it is to be an heiress,” she had said in her 1963 letter to President Kennedy.
at May 12, 2017