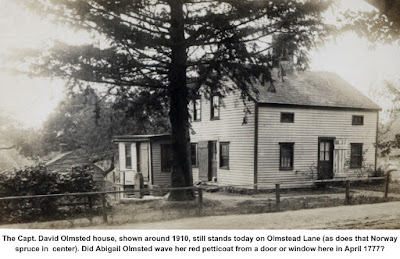 Capt. David Olmstead:
The Tale of the Red Petticoat
Capt. David Olmsted was a leading citizen in the last third of the 18th Century. He was a Revolutionary War hero, longtime state representative, and friend of the makers and shakers of Ridgefield. His father was descended from the founders of the town and his mother was the daughter of Col. David Goodrich, who fought in Queen Anne’s War. His wife was the daughter of the town’s second minister, whose nephew helped write the United States Constitution.
But if David Olmsted is remembered at all today, it for a few angry words he allegedly shouted at his wife after the Battle of Ridgefield.
David Olmsted was born in Ridgefield in 1748, a son of Deacon Nathan Olmsted and Millicent Goodrich Olmsted. He grew up in Ridgefield and, in 1769, married Abigail Ingersoll, daughter of the Rev. Jonathan Ingersoll, minister of the First Congregational Church and a cousin of Jared Ingersoll, who worked on and signed the Constitution. He was 20, she 18. The couple had eight children.
Unlike his father-in-law, who opposed the Continental Congress in 1775, David Olmsted was all for the cause of the revolution. As a captain in the continental army, he led companies of volunteers at West Point, in the defense of Greenwich, and at the alarm at Fairfield. But he is most important locally for his participation in the Battle of Ridgefield on April 27, 1777.
In his book, “Farmers Against the Crown,” Keith Jones describes major players at the battle scene and observes: “Nearby was Captain David Olmsted, whose little one-and-a-half story ‘saltbox’ 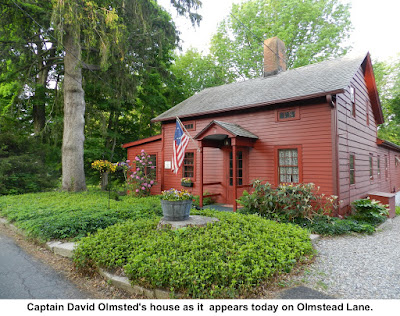 home still stands in the south end of town along (what else) Olmstead Lane. Olmsted...was one of the first Ridgefield men to commit to the Patriot cause, having led a company to Washington’s army in early ’76. The commander-in-chief must have made a forceful impression on the 27-year-old captain, for on this very day one year earlier (April 27, 1776), he named a newly born son George Washington Olmsted! In addition to defending his home and four young children, Captain Olmstead had scores to settle with the Redcoats — cousin Roger fell in action in 1775, and cousin David was killed Jan. 4, 1777, in Washington’s victory at Princeton.”

But it was after the battle and presumably after the British left town when the story of the Red Petticoat finds its origin.
Smithsonian historian Silvio A. Bedini was the first person to recount the tale in print. In his 1958 history of the town, “Ridgefield in Review,” Bedini wrote: “The Red Petticoat story exists in 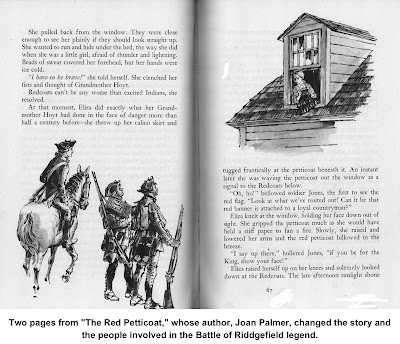 several versions in the local lore of the Battle of Ridgefield, which has been handed down by word of mouth from generation to generation. One account told of Mrs. David Olmsted, who lived in either the original Olmsted homestead … on Olmsted Lane, or  in the Olmsted house [just to the south]. Captain David Olmsted, the owner of the homestead, fought at the barricade and took shelter in the woods when the British advanced through the town.

“His wife remained at home with her children, anxiously awaiting word of her husband and of the progress of the conflict. When the detachment of British troops came marching along Olmstead Lane to the camp site [on Wilton Road West], she feared that her home would suffer the fate of others that had been burned by the British during the day. Looking about for some means of saving it, she thought of posing as a Tory. Having no other suitable symbol at her disposal, she removed her red petticoat and waved it from the house as the British soldiers came marching off West Lane Road and along the lane. The British, thinking it was a Tory house, left it unharmed.
“When her husband arrived home at last during the night or on the following day, Mrs. Olmsted proudly recounted the incident, pleased with her presence of mind. Not so her husband. Livid with rage, Captain Olmstead thundered: ‘Woman, if I had seen you, I would have shot you dead!’ Far better it would have been to have this home destroyed than to have his wife suspected of being a Tory.”
Could the story be true and could Olmsted have really uttered such strong and offensive words to his wife? Possibly; he would probably have been exhausted and perhaps discouraged from the encounter with the British, and may have blurted out his frustration in the unkind words. If he said it, did he mean it? Probably not. It is quite likely that Abigail Olmsted was a strong, highly intelligent woman who would not have put up with a husband who said he would kill her. Since she and David went on to have four more children and remained together for the rest of her life, it seems likely that he would have apologized for his outburst — if it happened at all.
Adding some doubt to the veracity of the whole story is the fact that his homestead did, in fact,  suffer fairly substantial damage from the British. Property owners who suffered losses due to enemy action in the Revolution could seek compensation from the Connecticut government, and many did. According to research done by Keith Jones, “a reimbursement request exceeding £54 appears under Captain Olmsted’s name on the summary of damages submitted by town selectmen to the General Assembly.” £54 was a good deal of money back then.
Both town historian Dick Venus and battle historian Keith Jones said the house standing today at 91 Olmstead Lane is likely the Captain David Olmsted place. It was so marked with a sign during the town’s celebration of the Bicentennial in 1776, and Silvio Bedini said he thought of the three old Olmsted houses on the road, #91 was most likely the one owned by David.
While the legend has no basis in historical records, it did inspire a 1969 book for youngsters. In “The Red Petticoat,” by Joan Palmer of South Salem, a girl named Eliza Bouton waves a red petticoat out the window while her father and grandfather are off fighting the British on Main Street. However, she did so not to save her house, but to protect a young, wounded patriot, carrying a desperately needed message for General Washington, who had collapsed on her home’s doorstep. Needless to say, no one talked of shooting her for her petticoat trickery.
Toward the end of the war, Olmsted was promoted to lieutenant colonel — but local history and perhaps his local contemporaries continued to call him Captain Olmsted. After the war he became active in the government, serving as a member of the Board of Selectmen and holding other offices. From 1781 until 1798, he was often elected one of Ridgefield’s representatives to the state Legislature — helping Connecticut and Ridgefield to recovery during the post-war years. He often served in the legislature alongside Col. Philip Burr Bradley or Lt. Joshua King, two veterans of the Revolution and leading Ridgefield citizens.
However, around the beginning of the 19th Century, Olmsted did what many New England 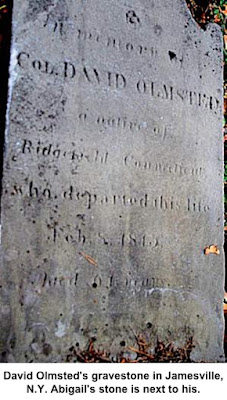 farmers were doing: He went west. Good land was becoming scarce here and western New York promised new possibilities. He and Abigail and their family moved to Onondaga County, N.Y., , becoming one of the first settlers of the area around Jamesville, now part of the town of DeWitt. There, he was known as Colonel Olmsted. By 1806, he owned a tavern, which a local history reported was “popularly considered the best hostelry west of Utica.” (This was a community that knew about spirits; Jamesville area was settled between 1790 and 1800 and, in 1798, one Matthew Dumfrie was already building a distillery, malt house and brewery there, producing the first beer and whiskey made in Onondaga County — a territory that includes Syracuse.)

Abigail died in 1805. Olmsted subsequently married Abiah Keeler, a native of Norwalk who, like others, had headed west. They had no children.


Olmsted died in 1815 at the age of 66. He is buried alongside Abigail in the Walnut Grove Cemetery, Jamesville, Onondaga County, N.Y.