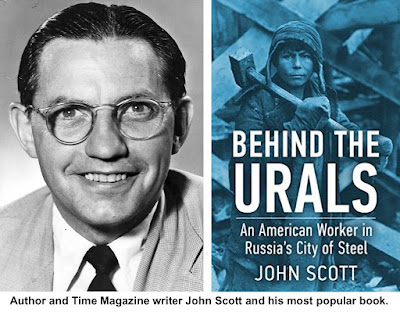 John Scott:
A Hands-On Journalist
When journalist John Scott worked with his hands, it was not just to type his eight books, scores of white papers, and countless Time magazine articles. Scott began his career a welder in Russia, and later, when he came to Ridgefield in 1948, built his stone-and-wood Peaceable Ridge home with his own hands.
The son of the liberal social reformer, Scott Nearing, John Scott Nearing was born in Philadelphia in 1912. He dropped his father’s name after a disagreement and left the University of Wisconsin after two years because of financial problems. It was during the Depression and, intrigued by communism and socialism, he decided to learn electric welding at the General Electric school in Schenectady, N.Y., and, after unraveling a lot of red tape, headed for Russia. There, at age 20, he began working in a Urals factory as a welder. After several years, he became a foreman and finally a chemist.
It was in the Urals that he met and married his wife, Maria “Masha” Dikareva, the daughter of illiterate peasant parents. Thanks to the free education system in Russia, Masha Scott had studied mathematics and chemistry at a Moscow institute and her siblings included two teachers, two engineers, two doctors, an economist, and a college dean. Throughout her life, along with raising two daughters, Masha Scott continued her studies and taught in many places, including at the University of Connecticut and Norwich University in Vermont. She had earned a master’s degree and, late in 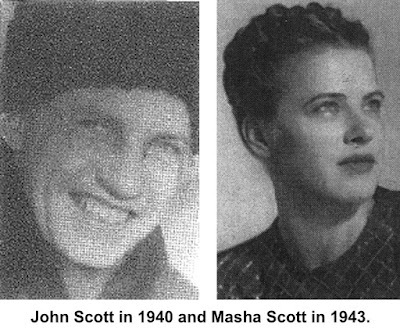 life, was working on a doctorate in Russian language.

Scott lost his job in Stalin’s 1937 purge, but he remained in Russia as a French and British news correspondent. Two weeks before the German attack on the USSR in 1940, he was expelled from the country for “slandering” Soviet foreign policy and “inventing” reports of Soviet-German tension.
He soon began covering World War II as a correspondent for Time magazine, and was in Japan in 1941, just before Pearl Harbor.
In 1942, Scott became a staff writer for Time’s foreign news section and during much of the war, headed Time-Life’s bureau in Stockholm.  After the armistice he reopened the Central European bureau, covering the aftermath of the war. There are reports that especially early in the war, Scott worked for the U.S. Office of Strategic Services, the predecessor of the Central Intelligence Agency, and had supplied the government with information on the Soviet war industry.
Throughout and after the war,  he delivered many lectures on world affairs, speaking before such groups as the Foreign Policy Association.
In 1948, he moved to Time’s Manhattan offices and came to Ridgefield where he took a year’s break and began building his Peaceable Ridge home. He later confessed that “I was going to run for the senate and write the great novel. Those projects flopped ignominiously, but I did get my house built.”
Peaceable Ridge back then was called Standpipe Road, had only one house along it, and was 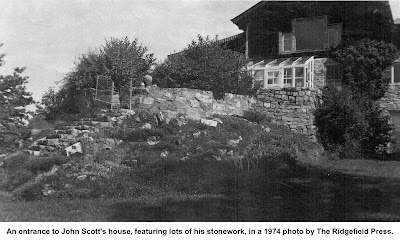 a narrow, dirt path that was treacherous in bad weather. But the view from his place offered a wide sweep of the Hudson Valley; on a clear day, one could see the Empire State Building.  He bought three acres from Harold O. Davis, who was the longtime town tax assessor, but, he said,  “later, when we got it surveyed, we found out we had five acres which is something that was very fortuitous — something for which I don’t think Harold has ever forgiven me.”

Scott decided to use the parcel’s natural resources — rocks and trees — to build his home, which wound up as an eclectic four-story structure along the side of a hill. The house had many walls of rock, beams from local trees, and no nails — Scott employed the colonial technique of using wooden pegs with mortise and tenon joints. He built most of the furniture, also without nails, including four large oak tables, one of which was so large that it could never be removed from the room in which it was fashioned. He took pains to make sure any “store-bought” furniture matched the hand-made look of the interior. “That was a regular Steinway,” he told a visitor in 1974, pointing to a piano, “but we sanded it down and stained it the same color as the rest of the stuff in the room.”
The grounds included many stone walls, a swimming pool and a tennis court.
The Scotts often entertained friends and associates at dinner parties and outdoor poolside gatherings — Vice President Henry Wallace of South Salem was a frequent visitor.
In 1951 he joined the close staff of Time-Life publisher Henry R. Luce, also of Ridgefield, and began in-depth reporting on crisis areas such as Latin America, the Soviet Union and the Middle East. Over 17 years he turned out 12 reports that Time distributed to leaders in government, education and business.
He also lectured widely, especially at colleges and universities. A gifted speaker (he won an oratory contest as a child at the Quaker school he attended in Pennsylvania), Scott never used prepared text or even notes for his addresses. His many talks were often spiced with good humor. Lecturing, he said in 1973, is largely a matter of “mastering diaphragmatic breathing. I’ve been told that if you breathe right, it doesn’t matter what you say.”
His first book, published in 1942, was “Beyond the Urals,” the story of his experiences in the Soviet steel mill, which the New York Times called “a genuine grassroots account of Soviet life” and “a rich portrait of daily life under Stalin.” It is still in print.
Other books were “Duel for Europe” (1942), “Europe in Revolution” (1945), “Political Warfare” (1955), “Democracy Is Not Enough” (1960), “China, The Hungry Dragon” (1967), “Hunger: Man’s Struggle to Feed Himself” (1969), “Divided They Stand” (about East and West Germany) (1973), “Detente Through Soviet Eyes” (1974), and “Millions Will Starve” (1975).
Despite his work at Time and at his home, Scott still had time for his hometown, especially its political side. He belonged at first to the Ridgefield Democratic Club.  But he later became a Republican and promoted more conservative policies. He often spoke here, and in 1966, delivered the 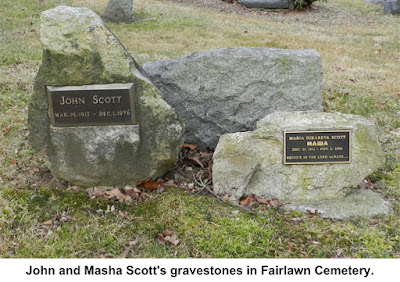 After his retirement from Time in 1973, he became vice president of Radio Free Europe and Radio Liberty, where he would also sometimes appear on the air.  In 1974, he made “five broadcasts in Russian on hunger, beamed to millions of listeners from Leningrad to Odessa,” he told an interviewer.
He also continued to lecture around the country. And it was while on a speaking tour in 1976 that he suffered a stroke at the Lake Shore Club in Chicago and died at the age of 64.
“He wanted to build the structure of a better world,” said the Rev. Clayton R. Lund of the First Congregational Church at his funeral. “Such optimism never left him because he had such access to human weakness and nobility; he was obsessed with the triumph of the human spirit.”

Awesome story, thank you! I just finished reading his book "Beyond The Urals"