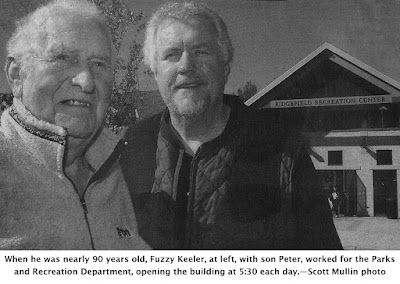 Nehemiah Lyman Keeler:
A Last Link
When Lyman Keeler died in 2005, the town lost a last link with what Ridgefield was for most of its existence: A community of hard-working farmers, most of whom were born here and most of whom spent their lives in fields and barns, tending crops and livestock. For much of his life, he tilled land and milked cows, just as had generations of Keelers before him.
Fuzzy Keeler was a direct descendant of the pioneers who came to these hilly, rock-riddled woods in 1708 to create a new settlement called Ridgefield. One of his Keeler ancestors built the house in which he was born. It was the same house in which he died — the famous “Pink House” on Ridgebury Road that was torn down in 2009 amid much controversy.
“He gives you a flicker of what Ridgefield used to be, and the uncommon people that made it what it was — in a word, a pleasure,” fellow Ridgeburian John Katz once said of him.
Nehemiah Lyman Keeler was born in 1913 in that Pink House; it was one of the town's oldest buildings, dating from the early 1700s and believed to have been erected by Jonah Keeler. It had remained in the Keeler family for more than two and one-half centuries. His ancestors, Ralph and Samuel Keeler, were among the first settlers of Ridgefield and, later, its Ridgebury parish.
When he attended first through eighth grades in the one-room Ridgebury Schoolhouse at the corner of Ridgebury and Old Stagecoach Roads,  Keeler was known as a boy with an eye for the prank. He once filled a bag with leaves, climbed a ladder onto the school’s roof, and stuffed the bag in the chimney. When the teacher lit a fire in the stove, the entire schoolhouse filled with smoke.
“They closed school for two days for that one,”  Keeler, a twinkle in his eye, recalled in a 2002 interview.
From northern Ridgebury, Danbury was two miles closer than Ridgefield center, and  Keeler attended Danbury High School — reached by horse and buggy. After high school, he began working

Back when he was a boy, Ridgefield was mostly an agricultural community. “Every place was a farm, every place,” he said. “I remember when there wasn’t a car on the road, just horse and wagons.” Occasionally a car might come along the dirt Ridgebury Road “and everybody’d run out to see and see who it was.”
“It’s like a city now,” he said in 2003. “I waited for 51 cars to go by my driveway the other day before I could get out.”
“But you can’t stop progress,” he added. “You got to keep going.”
By 1961, when Keeler was having difficulty finding enough good help to keep the farm going, he decided to sell most of the pastures, some 120 acres. Jerry Tuccio eventually acquired the property, turning it into the Pleasant View Estates subdivision. Keeler Drive there recalls the land’s past. 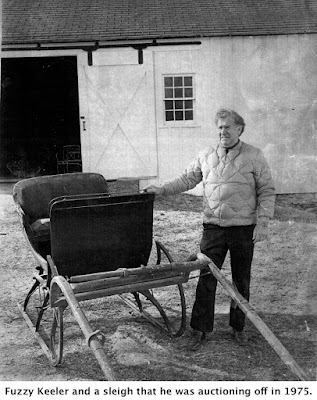 Over the next 30 years, Keeler held a variety of jobs, including car salesman, gun shop owner, assistant service manager for a Chrysler dealer, owner and operator of a trucking delivery business, and an auctioneer selling everything from cattle to go-carts.
When he was 90, he worked at the Parks and Recreation Center, opening the building at 5:30 each morning — the same time he used to milk the cows. He retired the year before he died.
In the 1930s,  Keeler began his lifelong interest in motorcycles, acquiring a four-cylinder Henderson. “His true love was motorcycle riding,” said his son, Peter. “He received many ‘oldest rider awards’ at rallies and rode up until the summer of 2004.”
He was also an avid hunter, gardener, and animal lover.
Keeler loved Ridgefield and had no inclination to leave. “I’ve been to Florida a few times, but I won’t go back,” he said. “It's like a jungle down there with the heat and the noise. I said, ‘What the hell kind of place is this?’”
And while the farming community of his youth has disappeared, he accepted change. “There is nothing you can do about it,” he said. “But it is good to think about the old times.”
After his death his “Pink House” on Ridgebury Road was purchased by a couple who lived next door and who planned to restore it. When they found restoration would be too expensive and fearing liabilities from having a vacant, deteriorating building, they offered the old house to the town, which would have to move it to another site. When the town did not act on the offer, they tore it down, prompting many townspeople to decry landmark’s loss.
When Lyman Keeler died at the age of 91, The Ridgefield Press observed: “Over the years many people have been called ‘Mr. Ridgefield,’ chiefly for their involvement in town affairs. But few have had more Ridgefield in them than Fuzzy Keeler, a man who was born, lived and died in the home of his ancestors and who had worked the same land those ancestors carved from the wilderness nearly three centuries ago.”