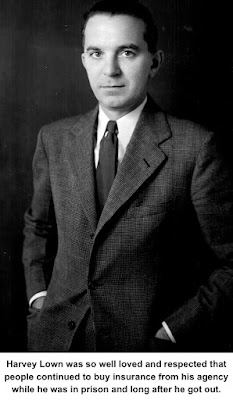 Harvey Lown:
The Beloved Embezzler
Probably no arrest in Ridgefield’s history has evoked the outpouring of emotion that surrounded the case of Harvey Lown, a beloved war veteran and native son who had been Ridgefield’s tax collector for 13 years . Even the judge who sent Lown to prison had tears in his eyes when he pronounced the sentence.
When the arrest came in February of 1940, “it was as though a bomb had been dropped in our little community,” wrote former town historian Richard E. Venus.
Harvey Bishop Lown was the Norman Rockwell picture of the ideal citizen of a small New England town, a man who had risked his life for his country in World War I, who owned a successful local business, who had led many major organizations in town, who had served on the school board and as a state representative, and who, with his beautiful schoolteacher wife, was invited to many of the nicest social events in Ridgefield.
Born in 1899 in neighboring Wilton, young Harvey Lown came to Ridgefield at the age of three. He attended local schools and Norwalk High School — Ridgefield had no high school back then — and was both a good student and a fine athlete. “He was a great baseball player, an exceptionally good hitter and base runner, and played the outfield with the grace of a Tris Speaker or Joe DiMaggio,” recalled Venus. “He had a very pleasing personality and was very easy to like.”
After graduating Lown worked as a clerk in S.D. Keeler’s store (where Deborah Ann’s Sweet Shoppe is now) until the outbreak of World War I, when he joined the U.S. Navy. Lown served as a storekeeper aboard the U.S.S. Minnesota and later the U.S.S. Tenadores, which was transporting troops and war supplies to France. He sailed on seven missions to France, but on the eighth, his military career nearly ended. At midnight on Dec. 28, 1918, the 485-foot Tenadores struck rocks in the Bay of Biscay and began sinking. Lown and fellow crewmates drifted in a lifeboat for two days before being rescued by a minesweeper. He was then assigned to a destroyer, which stayed afloat till war’s end.
Back in his hometown, Lown went to work for Judge George G. Scott, who had an insurance business and was also the town clerk. It was working under Scott that Lown was introduced to a bookkeeping technique that was to be his downfall. In 1926, he bought Scott’s business on Main Street, a bit south of the town hall, and renamed it the Lown Agency.
Lown was becoming increasingly involved in the community, where he eventually became president of the Promoter’s Club, precursor of the Lions Club, of which he was also president. He was chairman of the 1939 Building Committee that enlarged Ridgefield High School with an auditorium (now the Ridgefield Playhouse), cafeteria and classrooms. He was active in the Red Cross, the Masons, the American Legion, St. Stephen’s Church, and various relief efforts during the Great Depression.
In 1927, Lown was elected the town’s tax collector, a part-time job held over the generations by the most respected and trustworthy citizens.
At around this time he was courting a popular Ridgefield teacher, Elizabeth O’Shea (whose sister Isabel, also a teacher, became the first principal of Veterans Park School). Venus described 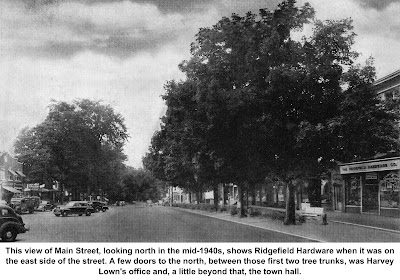 Elizabeth as “very pretty” and “very popular.” Harvey and Elizabeth were married in August 1929, two months before the Wall Street crash that was to figure in Harvey’s later troubles. 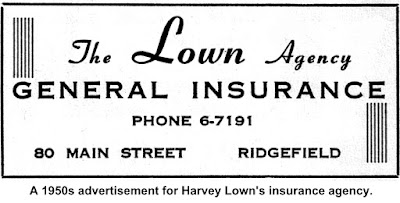 many Ridgefielders would buy their insurance from his wife. People still loved Lown, and tried to help in many ways. Dr. and Mrs. Robert DuBois, for instance, doubled their amount of insurance to show their support for him.

When he was released from prison in 1943, “the strain had taken its toll,” Venus said. “The once vibrant and enthusiastic Lowns would never be the happy people they had been.”
Nonetheless, Lown remained a part of the business and social community, and was particularly active in the American Legion where he served many years as chairman of the Sailors, Soldiers and Marines Fund, retiring in 1962 because of poor eyesight. In 1964, he was elected president of the Last Man’s Club, a group of World War I veterans. In a touch of irony, his vice president was John C. Kelly, former head of the Connecticut State Police Department.
The Lown Agency was eventually sold to A.J. Carnall, which is now part of the Fairfield County Bank Insurance Services. Elizabeth died in 1959 at the age of 57. A year later, Lown married Katherine Klein English, a widow from Bethel.
When he died in 1967, the man who had once been a friend of everyone in town and subject of countless front-page stories, good and bad, had only a brief six-paragraph obituary, placed deep inside that week’s Ridgefield Press. It said nothing of his having been the town’s tax collector for 13 years — or of his arrest and imprisonment.


“Harvey’s loyal friends have always felt that he never shortchanged anyone but himself,” Venus said.—from “Wicked Ridgefield”