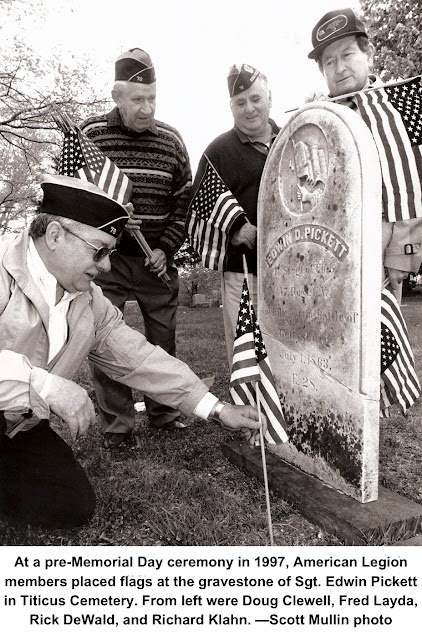 Edwin D. Pickett:
Grasping the Colors
A total of 3,155 Union soldiers died at the Battle of Gettysburg at the beginning of July, 1863. Among the first was Eddie Pickett, who was killed on July 1. He was 28 years old and left a wife and two-year-old son.
Unlike most victims, however, his name survived long after most others were forgotten.
Edwin Darling Pickett was born in Ridgefield in 1835, a son of Rufus H. “Boss” Pickett and his wife, Betsey Parsons Pickett. His father was a noted furniture-maker in town; his first shop was on Main Street, opposite today’s Christian Science church, and he later worked from a building on Market Street.
In 1857 Edwin Pickett married Sarah Chickering Harrington — a descendant of a Revolutionary War captain — in Taunton, Mass., and four years later, they had a son, Edwin William Starr Pickett.
Described by a friend as a “taciturn country lad,” Pickett was working as a clerk in the early 1860s when he enlisted as a corporal in the 17th Regiment from Connecticut in August 1862.
“He rose rapidly, and was promoted to sergeant by mid-November to 1st sergeant a month before his death,” wrote Charles Pankenier in his book, “Ridgefield Fights the Civil War.” “As ‘orderly,’ he was entrusted with running the company in the absence of its captain, and in preference to the lieutenants who were his nominal superiors.”
On July 1, his regiment was advancing at Barlow’s Knoll. “They were led by the flags that were the symbol of regimental honor — and a high-profile target,” Pankenier said. “Years later a comrade would recall: ‘Here Orderly Edwin D. Pickett was shot down while grasping the regimental colors, being the third bearer, who had carried them to the death.”
News of Pickett’s fate had reached home by July 6 when Anna Resseguie, daughter of the 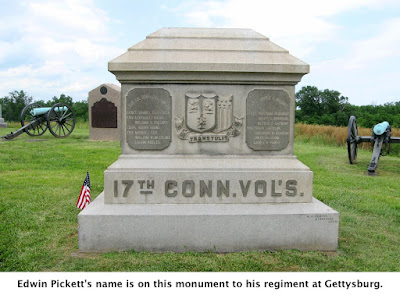 Keeler Tavern proprietors, noted his death in her diary. Edwin’s brother, Rufus Starr Pickett, known as Starr, went to Pennsylvania to retrieve his brother’s body and, Resseguie said July 12, “searched some time among the dead at Gettysburg before he was found; his blanket was wrapped about him, his watch and pencil given by Starr, were in his coat sleeve.”

Resseguie also reported that at the July 12 funeral, “a long procession of pedestrians, as well as carriages, followed his remains to the grave.”
After the war ended, Ridgefielders formed a post of the Grand Army of the Republic (GAR), the equivalent of an American Legion for Civil War veterans. Among the founders was Aaron W. Lee of Farmingville. A close friend of Pickett, Lee was also at Gettysburg, was with Pickett in the battle at Barlow’s Knoll, and was wounded at the same time. Lee woke up to find his buddy lying dead beside him.
It was Lee who suggested the new GAR group be named for his fallen comrade, and for many years the Edwin D. Pickett Post of the GAR was a major organization in Ridgefield. In fact, in 1884, it played host to the Connecticut GAR reunion that included a parade of 400 Civil War veterans down Main Street, watched by some 2,000 people. (The entire town’s population back then was 2,100.)
Among the speakers at the gathering was Attorney Rufus Starr Pickett of New Haven, who 21 years earlier had searched Gettysburg for the body of his heroic brother.