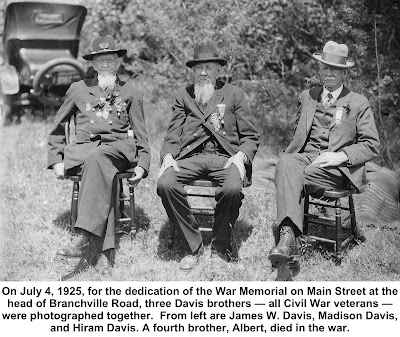 Hiram Davis:
The Last Blue
When Hiram Davis died in 1947, he was one of only two Connecticut veterans of the Civil War still living and one of only 47 survivors of the war in the nation who were listed on the Veterans Pension Rolls in Washington. He had also been the last living Civil War veteran from Ridgefield.
But perhaps even more significant — and often overlooked — was the fact that Hiram was just one of four brothers who all served in the Civil War.
One of them never returned.
Hiram Davis was born in 1849 on the Davis family farm in Wilton, right on the Ridgefield border, along Nod Road. A twin brother, Henry, died as an infant.
When he was only 15 years old, Hiram enlisted in the 25th Regiment of the New York Cavalry. He served as a drummer boy in Sheridan’s army in the Shenandoah Valley and was with the general on his 20-mile dash from Winchester, immortalized in the Thomas Buchanan Reed poem, “Sheridan’s Ride.”
After the war, he moved to Ridgefield, living here until 1929 when he retired to Florida.
He was a stonemason and, according to The Ridgefield Press, “it was said there was scarcely a chimney in Ridgefield…which had not been built or repaired by him.”
Active in the community, Hiram served as a state representative in 1908, as a borough warden, and in the fire department. He was a Mason, Odd Fellow, and the last member of the Edwin D. Pickett Post of the Grand Army of the Republic, Ridgefield’s organization for Civil War veterans.
When he died in 1947, he was 98 years old.
Hiram was one of at least eight children of Hiram and Catherine Hoyt Davis. Three brothers, James W. Davis (1844-1927), Albert N. Davis (1929-1864), and Madison Davis, all served in the war. James and Albert enlisted from Ridgefield, Madison from Wilton.
Albert died of dysentery in a Washington, D.C., hospital nearly a year after enlisting in the Connecticut First Regiment of Heavy Artillery.
James was in the 12th Regiment, enlisting at the age of 16. He served under General B. F. Butler with Admiral Farragut and was at the surrender of New Orleans, and in the Battles of Georgia Landing and Pattersonville. He was with General Sheridan at the Battle of Winchester, and through the Shenandoah Valley of Virginia, and was reportedly wounded at least once during combat. James became a minister and, in 1925, was the commander of Connecticut’s Grand Army of the Republic organization when he spoke at the dedication of the War Memorial on Main Street at the head of Branchville Road. According to one account, he “made a stirring address telling of the trials and tribulations of service in the Civil War.”
Madison also served in the 12th Regiment, was captured at Cedar Creek, Va., in 1864, and was held for several months at the infamous Andersonville prisoner-of-war camp. Among Madison’s grandchildren was Harold O. Davis (1905-1986), longtime tax assessor of the town of Ridgefield.