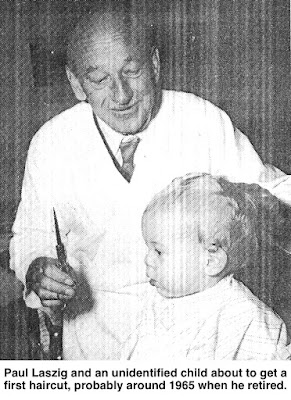 Paul and Johanna Laszig:
Surprise Philanthropists
A man who listened to advice and a woman who was grateful for help were behind a generous philanthropic effort. Since the early 1980s, the Paul and Johanna Laszig Fund for the Elderly has distributed more than one million dollars to help Ridgefield’s seniors.
Paul Laszig was born in Gonswen, East Prussia (now Poland), in 1900. After learning the trade of a barber, he emigrated to Buenos Aires, Argentina, in 1923. After only three years there, he decided to come to the United States, arriving in 1926 and living in New York City. There, in 1932, he married Irmgard Johanna Heine, who had been born in 1892 in Dresden, Saxony, which was later part of East Germany. She had come to the United States two years earlier to work as a maid.
The same year they were married, the Laszigs moved to Ridgefield.
For 33 years Paul Laszig operated The Modern Barber Shop on Catoonah Street, about opposite where the telephone building is today. The couple rented on Gilbert Street for many years before building a house at 245 West Lane (torn down around 2007 to make way for a more elaborate house).
On Wednesdays, when his shop was closed, Paul Laszig would visit the homes of some of 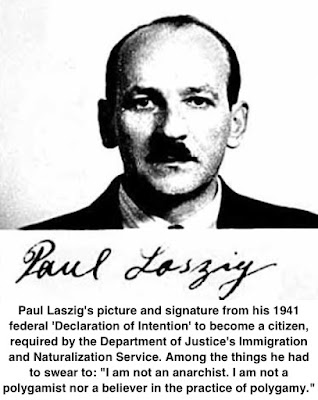 the area’s wealthy and powerful men to cut their hair. In the process, he’d pick up their advice on smart investments, in stocks or real estate. Among his clients were former U.S. Vice President Henry Wallace of South Salem, Ingersoll-Rand Chairman George Doubleday of Ridgefield, Underwood typewriter chief Philip Wagoner of Ridgefield, and pollster Elmo Roper of Redding. “Paul, like most barbers, was a good conversationalist, but more important, he was a good listener,” said town historian Dick Venus.

Laszig retired in 1965 after 51 years of cutting hair. He died in 1974 at the age of 74.
After Johanna died in 1980 at the age of 87, it was revealed that she had left an estate worth around $1.4 million, most of which was investments her husband had made thanks to his Wednesday clippings.
In her will Johanna bequeathed a share of her estate to create a fund to benefit the elderly. In her later years, she had had difficulty walking and was eventually wheelchair-bound. Friends speculated that the assistance she received from organizations such as Meals on Wheels and the District Nursing Association (now Visiting Nurse Association) helped inspire her to create the fund.
The will specified that the trust fund would aid elderly Ridgefielders “including, but not limited to, providing them with housing, medical assistance, transportation, food, or other  services for their general welfare in order that they may live out the remainder of their lives in dignity.”
The estate took more than two years to settle, delayed partly because the main portion of the bequests was left to five of Mrs. Laszig’s relatives in East Germany including a cousin and a nephew. Since East Germany was a communist country,  the will stipulated that if  “for any reason whatsoever, including but not limited to the law or policy of the government of East Germany,” the German beneficiaries would not receive the money left to them, that money would go to the fund for the elderly.
Union Trust Company, the bank that through several mergers is now Wells Fargo, was in charge of the trust. Attorney John E. Dowling, representing the bank and the trust, questioned whether the money should be sent to East Germany because most of it would wind up in the hands of the communist government there.
Dowling and the bank’s senior trust officer flew to West Germany to meet with a lawyer the East German heirs had hired. They negotiated an agreement in which the East Germans would receive 65% of the investments instead of all of it. The Laszig Fund would get the remaining 35% plus the $100,000 from the sale of the house. Thus, the fund was set up with around $371,000 instead of $100,000. In today’s dollars, that’s $935,000 vs. $252,000 — well worth the trip to Germany.
Each year the fund provides an average of six grants to nonprofit organizations and efforts helping Ridgefielders who are 62 years old or older. Grants range from $1,000 to $25,000, and total around $50,000 — although some years, as much as $59,000 has been distributed.
Among the efforts the fund has recently help support  are the fitness program at Founders Hall, the work of the town’s Commission on Aging, and buying large-print and audio books for the Ridgefield Library. Groups getting aid also include the Ridgefield Community Center, the town’s Social Services Department, Meals on Wheels, and the Ridgefield Visiting Nurse Association.
In 1983, the fund gave out $25,000 in grants — equivalent to about $61,000 in today’s money. So far over the years, it has distributed more than $1 million to aid the elderly of Ridgefield. The fund itself, which began at $371,000, has grown over the years and now has assets worth just over $1 million.


“I think Mrs. Laszig will be remembered for a long time for her generosity to agencies like Meals on Wheels,” said Romeo G. Petroni, who had been Mrs. Laszig’s attorney when her will was draw up. “Her memory and Paul’s memory will long survive — after we’re all gone — for the good they’ve done.”