Sperry and Doris Andrews:
Artists with A Sense of History
Sperry Andrews was the third noted artist to own the old Beers farmhouse at the corner of Nod Hill Road and Pelham Lane. He and his artist wife, Doris, decided that their home should become a memorial to the two preceding owners.
Today thousands visit the result: Weir Farm National Historic Site.
“The Andrewses recognized their farm as a place of extraordinary significance to American art and were instrumental in preserving its landscape and artistic legacy for future generations of artists,” the National Park Service said.
Charles Sperry Andrews III was born in 1917 in Manhattan (his banker father, Charles Sperry Andrews II,  and his grandfather were from Danbury and he could trace  his roots hereabouts back more than 200 years). When he was three, the family moved to Bronxville, N.Y., where his father had become president of a new bank.
Andrews attended both public and private schools, and knew from a very young age that he wanted to be an artist. He began sketching seriously at eight years old. He eventually studied at the 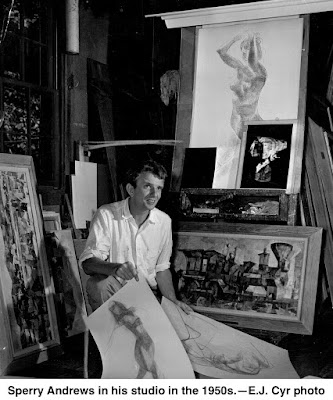 National Academy of Design in New York and later at the Art Students League, also in New York.

During World War II, Andrews served in the First Army Division from 1941 to 1945,   in Iceland, France, Belgium, and Germany. He was in charge of munitions, and took part in the second wave of the invasion of the beaches at Normandy.
It was at Art Students League that he met fellow student Doris Bass, who became his wife for 55 years. A native of Louisville, Ky., she was born in 1920 — a great-granddaughter of William Kelly, who invented the pneumatic process of refining steel. She graduated from the Erskine School in Boston and served in the U.S. Army Corps of Engineers as a Morse code telegraph operator during World War II. After the war she moved to New York City to study art.
The couple had three children. In 1948 they moved to Ridgefield, living in the old “Book Barn,” which had been a bookstore and tearoom in the 1930s, on Route 33 right on the Wilton line.
They lived there nearly 10 years, painting, raising their children, and summering on Block Island — one of the artist’s favorite subjects for his pictures.
Soon after he moved here, Andrews learned that Mahonri Mackintosh Young, the noted American sculptor and son-in-law of American Impressionist Julian Alden Weir, lived in Ridgefield. As a new artist in town, Andrews knocked on the old artist’s door — “the door of the farmhouse the late Mr. Weir had acquired in 1882 and made a country retreat for a wide circle of turn-of-the-century artist friends, including Albert Pinkham Ryder, Childe Hassam, John Twachtman, and John Singer Sargent,” wrote Macklin Reid in Andrews’s obituary. “It was an artistic legacy that Mr. Andrews grew to deeply appreciate, first as a friend of Mr. Young, later as an owner and, eventually, as artist-in-residence at The Weir Farm.”
The Andrewses became close friends with Young (also profiled in Who Was Who). When Young died in 1957, they bought the main Weir farmhouse and surrounding property.  They also became friends with Cora Weir Burlingham, a daughter of J. Alden Weir, who donated substantial portions of her nearby property to Nature Conservancy as the Weir Preserve. 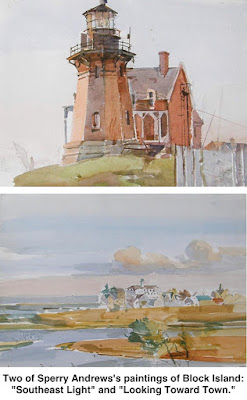 During their 50 years in the house, “they never altered any of the original architectural footprints or interior details of the various structures on the site,” said Julie Trachtenberg, a former Weir Farm researcher.
In the late 1970’s, as the property in the area began to be developed for subdivisions, the couple started a grassroots effort to preserve the farm for future enjoyment by the public and by artists. “Both Sperry and Doris Andrews devoted tremendous amounts of time and energy to preserving the property and ensuring that others recognized its importance in the history of art in America,” Reid wrote.
They enlisted the support of The Nature Conservancy, The Trust for Public Land, the State of Connecticut, and various politicians, including U.S. Senator Joseph Lieberman. Finally in 1990, Congress voted to create Weir Farm National Historic Site, the only national park property in the country that celebrates American painting.
While the Weir Farm was sold to the federal government, the couple retained life use of the main farmhouse and they continued to live and paint there until they died.
Sperry Andrews was an accomplished and well recognized artist whose specialty was plein air landscapes. He was remembered locally in the 1950s and 60s for his mobile studio — an old Willys Jeep with all but the driver’s seat removed.
He “paints year round out-of-doors,” New Britain Museum of American Art Director Charles Ferguson wrote in 1983. “His paintings are completed on the spot, not the usual ‘sketch from the field, redo it in the studio’ scheme.”
“That is undoubtedly why Sperry Andrews’ paintings and drawings have such freshness and harmony of light, color and line. One may find traces of Cubism and the Orient in his work but he has developed a blend which is uniquely all his own.”
New York Times art critic Vivien Raynor once observed that he “paints the Connecticut countryside, but with considerably more panache than Weir… Though he uses richer color and seldom if ever includes figures, Mr. Andrews often recalls Fairfield Porter in the suppleness of his Impressionistic brushwork and in his intimations of a life lived in comfortable middle class surroundings.”
Andrews worked primarily in oil, watercolor, charcoal, and pencil and over his long life, produced more than 10,000 works.
His art is in the permanent collection of the New Britain Museum as well as at the Wadsworth Atheneum, the Columbus Gallery of Fine Art, and the National Academy of Design.
He won many art awards and prizes and was elected a member of the Century Association in 1993 and made an academician of the National Academy of Design in 1994. He taught at the Wooster Community Arts Center in Danbury and at the Silvermine College of the Art  in New Canaan.
Andrews was 87 when he died in 2005, and is buried in Wilton’s Hillside Cemetery. Doris had died two years earlier at the age of 82.
“His vision of a singularly beautiful world inspired all those who knew him,” said his 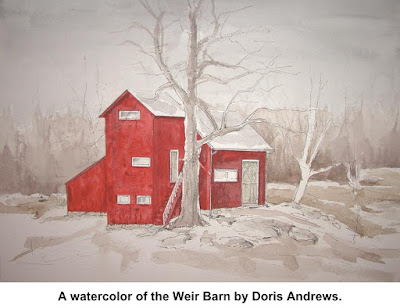 daughter, Catherine Barrett Andrews. “He was unfailingly gracious and polite in his approach to people, and to life itself.”

However, Catherine Andrews pointed out in 2003, her mother was also “a brilliant watercolorist. She really gave up her art work for him, when they got married and started a family.”
Catherine recalled that “at one point my father and a bunch of their artist friends were sitting around and my brother, Sperry, produced a number of her early works, watercolors, and everyone present was just amazed at how beautiful they were. There was just this stunned silence.