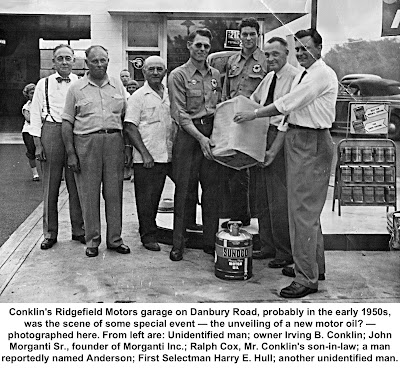 Irving B. Conklin:
A Symbol of Change
In a way, Irving Conklin symbolized the changing nature of Ridgefield in the 20th Century – from a farming town, to a haven for estates, and then to a bedroom community for commuters. Conklin participated in all three levels of the community, and was a leading participant in all three.
Born in 1899 in Hyde Park, N.Y., Irving B. Conklin Sr. came to Ridgefield as a young man and became superintendent of Dr. George G. Shelton’s estate along West Lane at the Ridgefield-Lewisboro line.
From 1928 till the early 1940s, he owned Conklin’s Dairy on Ramapoo Road, Ridgefield’s largest and last major dairy farm. Over those years he had supplied most of Ridgefield with milk.
“That was a time when the per capita consumption of milk in Ridgefield actually exceeded the per capita consumption of alcoholic beverages,” former town historian Dick Venus once observed, perhaps with a wink of an eye. As a young man Venus had delivered milk for Conklin, usually by horse and cart, and later had his own dairy.
In the 1950s, as more and more commuters were eyeing Ridgefield as a place to live, the Conklin farm was subdivided; it includes today’s neighborhoods of Farm Hill Road, Overlook Drive and Nutmeg Court.
In 1944 Irving Conklin and Leo Pambianchi started Ridgefield Motors, which grew into Conklin Motors, then became Village Pontiac-Cadillac on Danbury Road; the building now houses Party Depot.
In 1941, he acquired  Stonecrest, the large estate on North Street, and had his home there. During the war he and Joseph Young raised beef, pigs and sheep on the Stonecrest Farm.
In the 1950s he and his wife, Ethel, subdivided much of the property into the Stonecrest Road and Dowling Drive neighborhoods and around 1953 also established a riding stable on the old estate that is still in business today.
Ethel, incidentally, was famed for her homemade ice cream.  “There can be no other

delightful repast that conveys such a pleasant taste, along with the urge for a second helping,”  Dick Venus wrote in a 1984 column in The Ridgefield Press. “A host will really enjoy the plaudits of the guests when serving ice cream made with Mrs. Conklin’s renowned recipe. It is a sure way to put everyone in a good mood.”

Irving Conklin was a president of the Lions Club, a member of the Rotary Club, and belonged to the Odd Fellows.
He retired to Florida where he died in 1966 at the age of 66. Ethel died in 1991 at the age of 94.
Conklin’s Dairy Farm was a huge operation and had so many cows that Conklin at one point was ordering freight-car loads of peanut shells from the Planter’s factory in Virginia to use as bedding for the livestock. Venus recalled that the light but bulky shells cost $11 a ton to buy, but $15 a ton to transport. They were packed in sacks “that were almost large enough to hold a Volkswagen.”
However, Conklin eventually found that, even though the shells had no particular food value, the cows would on occasion eat them.
When he finally discontinued using peanut-shell bedding, Venus asked him why. “Because the milk was beginning to taste like peanut butter,” Conklin replied.