Michael Bullock:
Three Friends Who Flew
Longtime Ridgefielder Mike Bullock loved flying. So did two close friends, Robert Herrman and Donald Gough. All three died doing what they loved to do.
The three met in the U.S. Marines as young jet pilots. Later all three flew fighters off the carrier USS Forrestal in Vietnam. All three then went to work for Trans World Airlines, flying 747s.
They often did things together. For instance, Gough and Herrman spent 12 years building a single-engine Christen Eagle aerobatic biplane. 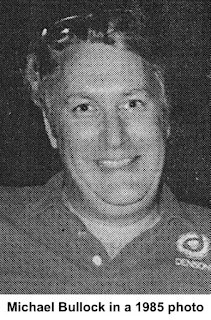 On July 17, 1996,  Gough, then off-duty, and his wife Analei, were flying as passengers aboard TWA Flight 800. Twelve minutes after the 747 took off from Kennedy Airport, the plane exploded over the ocean, killing all 230 people aboard. It was the third most deadly plane crash in U.S. history and the subsequent investigation, the most expensive in aviation history, led to a probable cause of a short circuit in a fuel tank. (The engineer aboard the flight was Richard G. Campbell of Ridgefield.)
Two years later, Bullock and Herrman were flying the Christen Eagle that Gough had helped build. They were near the Napa Valley of California when something went wrong and the aircraft plunged into Lake Berryessa, killing both of them. Bullock was 58 years old.
A New Jersey native, Michael Edward Bullock was born in 1940. He graduated from Fairleigh Dickinson University in 1961 and immediately joined the Marine Corps, earning his aviator wings in 1963. After his military service, he flew for TWA from 1966 until 1992, earning the rank of captain. He joined Taiwanese carrier EVA Airways in 1992 and was flying 747s for them when he died in 1998.
Bullock moved to Ridgefield the same year he joined TWA and left the same year he joined EVA, splitting his time between at homes in Chatham on Cape Cod and in Taiwan.
During his years here, he was active in the community. He was a founder and commandant of Ridgefield’s Marine Corps League detachment, and was among the first to lead its Toys for Tots program in town; he was named Marine of the Year in 1979.
He was a member of the Republican Town Committee, and other GOP groups, and was active in the Lions and the old Jaycees club. He managed Little League and Pony Colt baseball teams.
Bullock was also active in the Airline Pilots Association and was its safety and training chairman in the 1980s.
“He was a very outgoing, very friendly, very dynamic type of person,” said Paul Sedlak, a fellow TWA pilot and longtime friend. “He was very active and very involved in everything he ever did. And he was always doing something.”


He had a “zest for living,” said his wife, Mickey, who had been a Ridgefield teacher. “He was a pilot’s pilot.”