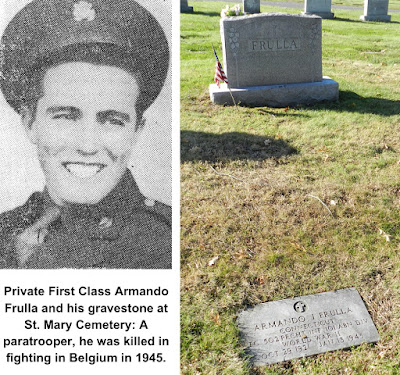 Armando Frulla:
A Hero’s Unlucky Number
“It seems that the number 13 was always unlucky for my brother Armando,” said Pauline Frulla Moylan. “He injured himself on barbed wire on the 13th, and he received a serious head injury sleigh-riding on the 13th.”
And on Jan. 13, 1945, on a battlefield in Belgium, Private First Class Armando Frulla lost his life.
“My mother would cry all day whenever she had a premonition that something bad was going to happen,” said Pauline’s sister, Augusta  Frulla Brusca. “On Jan. 13, 1945, mother started crying early in the morning. That day, on the way to work, I turned over the car and injured my shoulder slightly. When I returned home that night, I said to mother, that was the reason she had cried. Little did we expect the news we would receive in a few days.”
A Ridgefield native, Armando J. Frulla was born in 1922, attended Ridgefield schools, and graduated from Danbury State Trade School, now Henry Abbott Tech. He was a carpenter and worked for the Town Farm — the old “poorhouse” — on North Salem Road.
He enlisted in the Army in September 1941 and was assigned to duty in the medical corps in Texas.
“He could have had a deferment, but was determined to do his part for his country,” said Ridgefield historian Dick Venus.
According to Aldo Biagiotti in his book, “Impact: The Historical Account of the Italian Immigrants of Ridgefield, Connecticut,” “While he was waiting in California for shipment to the Pacific, he became bored and transferred to the paratroopers.”
“There was a high priority for paratroopers at the time, and Armando was accepted and sent to Fort Bragg for training,” said Augusta Brusca.
Frulla wound up in the same unit with two hometown friends, Dominic Bedini and Lester Hunt. In March 1944, while home on furlough, he became engaged to Gertrude Smith of Brewster, N.Y.  The next month,  Frulla, Bedini and Hunt were shipped to England.
All three landed in France on D-Day. Bedini and Hunt were both wounded and evacuated to England while Frulla escaped injury and was able to fight the Germans. (Hunt later was captured by the Germans and became a prisoner of war; Bedini is also profiled in Who Was Who.)
In December, after spending some time in a rest camp in France, Frulla and his unit were trucked to Belgium where they became involved in fighting around Bastone. “In the fight, the Germans surrounded the Americans and killed many,” said Brusca. “Armando was one of them.”
He was 22 years old.
“He was awarded the Purple Heart, a good conduct medal, but most important, the silver star for bravery,” said Betty Buzzi, a niece of Frulla.
Two years after the war ended, his parents,  Alessandro “Andrew” and Rosa Frulla, had his remains transferred from the American cemetery at Grand-Failly, France, to St. Mary’s Cemetery.
“Armando’s death crushed my father, and he was never the same again,” said Pauline Moylan.
“The Army send back some of Armando’s belongings. There were pictures, coins that he had collected from the various countries he had been in, and a paratrooper ring.


“Mother wore that paratrooper ring, whose insignia finally wore away, until the day she died.” —by Jack Sanders