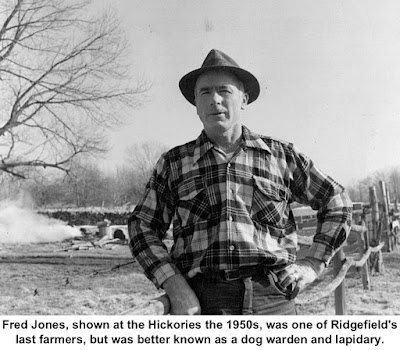 Fred Jones:
Dog Detective
One day in the 1950s, Fred Jones’s telephone rang. He picked up the receiver and a very angry woman’s voice began demanding that he do something about the two peacocks fighting in her yard.
“Madam,” he replied patiently, “I am not the peacock warden. I am the dog warden.”
Though born in Canada in 1908, Fred B. Jones spent most of his life in Ridgefield. He was one of the town’s last old-time farmers,  caretaker of the working farm at the Brewster family estate, The Hickories, on Lounsbury Road for nearly 60 years.
But he was also Ridgefield’s dog warden in the 1950s and 60s, and an expert lapidary.
In 1960, The New York World Telegram and Sun called Jones “the best darned dog warden in Connecticut” and described how he tracked down the owners of a lost collie by contacting authorities in Long Island, Michigan and Florida, and mailing more than two dozen letters.
The paper also told how one day, a Ridgebury recluse died while walking home from Danbury and his two dogs refused to let police or the medical examiner approach the body.   Jones talked to the snarling dogs, then walked into the dead man’s cabin. The dogs followed him and he locked them inside, telling authorities he had just employed some simple dog psychology.  (Jones and veterinarian Dr. Jordan Dann tried for six weeks to tame the dead man’s pets, but were unsuccessful and the dogs had to be put down.)
Perhaps it was more of that psychology — or just a good knowledge of the breed — that Jones employed when a wealthy guest at the Stonehenge Inn reported his two valuable beagles had run off. “Solving this case was child’s play for Fred Jones,” the New York newspaper said. “He knew beagles, so he went off into the Farmingville swamp and found the two dogs chasing rabbits.”
He also found a famous dog.  Morgan, a basset hound that had wandered away from its 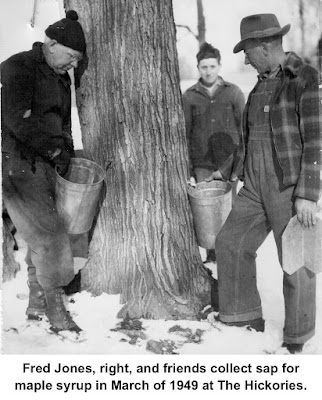 owner, TV and movie producer Dick Gordon, was well known to television viewers in the 1950s, appearing regularly on the Garry Moore Show and in several sitcoms.  (In 1973, the Altman Department Store Christmas catalogue in New York featured a “Huggable Morgan” stuffed animal complete with a squeaker nose.)

Roaming and usually unlicensed dogs were a serious problem in the mid-20th Century, when there were still farms with livestock that could be attacked. Jones was tough about licensing dogs, so much so in 1954 that he conducted door-to-door surveys of the town to make sure dogs were licensed.
In 1959, when roaming packs of dogs were attacking livestock and wildlife, he pointed out, under state law, that the town has to pay for chickens, sheep and rabbits that had been killed by stray dogs.
In 1961, the town was having problems with dog packs killing deer, which back then were relatively few in number to start with. Jones warned the public in February of that year that he had the right under law to shoot and kill dogs that were attacking deer.
Under Jones’s guidance in 1954, the town built its first dog pound to hold strays the warden had captured. It had six runs. First Selectman Leo F. Carroll said in 1959, when many of the state’s pounds were being criticized as cruel canine prisons, Ridgefield’s pound has “heat, light, meals, and each guest has his own private runway where he takes his exercise at his leisure.”
Sometimes even high-class impoundment did not sit well with locals, however. In 1957, Police Chief John F. Haight reported that some local children broke into the pound and “liberated” a beagle that had escaped from its Danbury owners.  Chief Haight said the children felt sad for the dog being locked up, but warned that “sometimes vicious dogs are kept at the pound, and any child gaining entrance to the building via a window might run the risk of being badly mauled or bitten.”
By the early 1960s, the pound was overcrowded and was housing two dogs per run. It wasn’t until 1973 that the town tore down the 1954 shelter and built a new 14-run building. By then Jones had retired.
Especially later in his life, Jones became well known an expert lapidary, a person who cuts and polishes gemstones. And to get the gemstones, he had rocks. Lots of them. “The quantity of rocks in and around the Lounsbury Road home of Mr. and Mrs. Fred  B. Jones might lead one to believe that the couple was planning to build a house of stone,” said a 1974 Ridgefield Press interview with Jones. “Not so. These are not ordinary rocks, they’re semi-precious stones in the rough.”
“A rock hound, Mr. Jones is hooked on the beauty which can be wrought from rough stones.”
By the 1970s, he and his late wife, Ruth, were traveling 25,000 miles a year, acquiring and selling rocks in a business called as Fred’s Gem Den.
Fred Jones died in 1999 at the age of 91.
Over his years in office as dog warden, Jones put in some long hours and was on call 24/7. Once he told a woman whose dog had run off to be sure to let him know if it returned. Two days later, his phone rang. “I wanted you to know that Rover just came home,” the woman reported.